We're up in Andersonville today where the owners of Jerry's Sandwiches closed their well known sandwich spot last year and opened a modern Israeli place where a wood burning oven is the focal point. It's a large space with a full bar and seats around the wood fired oven and a big patio in back. 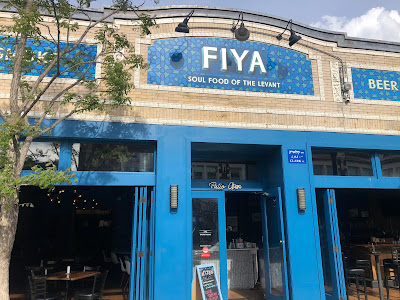 Recently Opened in Andersonville
Fiya calls the food they serve "Soul Food of The Levant" and their menu breaks down into different sections. Those are Salatim, Hummus, Plates, Khachapuri, Pitas, and Dessert. Salatim means salad (in plural) and it's a common part of an Israeli dinner. Typically it consists of a bunch of different cold starters. In the case of the Salatim served at Fiya those starters include Roast Cauliflower, Labneh, Roast Eggplant and a Zippy Corn Relish. They were out of the cauliflower so we got the $4 hummus add-on substituted for that. It all comes with a large fluffy pita baked in that oven I mentioned. This was a nice spread for a warm weather day and I think the corn relish was my favorite part bc it was pretty unique with chopped deli pickles included among jalapeno and bell pepper. There was a side of heavily marinated olives included too. The miss was the eggplant and the pita was just room temp. 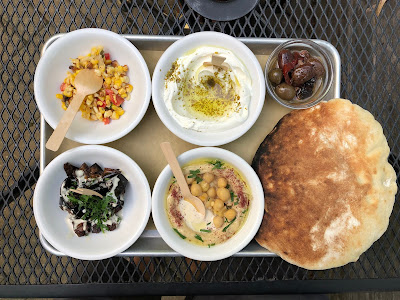 Salatim at Fiya
They make good use of the oven by serving Georgian style Khachapuri which is a cheese bread of sorts. This dish has been making the rounds across the country as baking has really taken off especially during the quarantine of 2020. These cheese boats as some call them are made with a soft yeast bread and typically come with an egg on top as well. The exact recipes vary by region so it's very much like pizza as far as local culture in Georgia goes. The Shakshuka version served at Fiya is a cheese + egg variety with shakshuka sauce (tomato / red bell pepper) poured into the open center. This was basically the equivalent of a really good cheesy breadstick from a pizzeria. Fantastic. 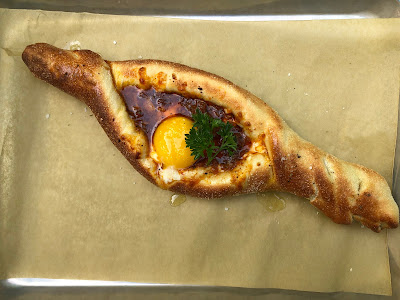 Khachapuri at Fiya
There's some interesting options on the plates portion of the menu including a whole wood roast chicken. But there's also some puzzling options including a piece of tilapia as the lone seafood offering. However the pitas at Fiya are big and make for a great sandwich stuffer. So I decided to go with a chicken schnitzel which comes served with Torshi (pickled vegetables), Tahini (ground sesame paste), and Amba (pickled mango condiment). It comes with a comically small amount of za'atar fries on the side. Maybe like ten total but they're pretty good and maybe worth ordering as a side on their own. Overall our dinner out back was quick and pretty much what I was hoping for. Fresh and filling. 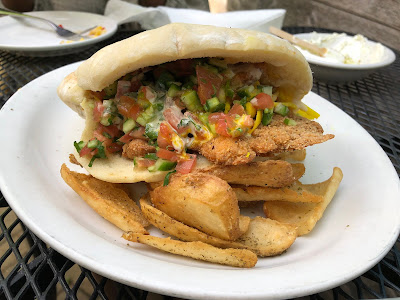