-Grubbing in Chicago
Venezuelan Sweets and Sandwiches in Boystown

A visit to the Venezuelan owned Sugar Blow feels like you're visiting an Instagram influencers studio. I remember when they first opened around nine months ago and the pictures on both google and Instagram were in the 100's and in the case of google they were obviously taken by a professional photographer and likely posted by the owner. It's located on Broadway in the middle of Boystown so it's flamboyant style fits right in. Sugar Blow is both a sandwich shop and a dessert emporium. All of it designed to look good on the gram. It has some very much overplayed neon hanging on the wall inside and some Boystown type art on the opposite wall. A big dessert case sits next to the register. 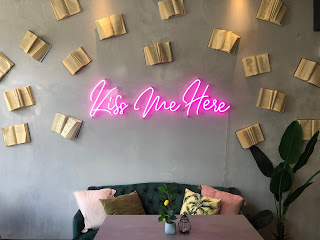 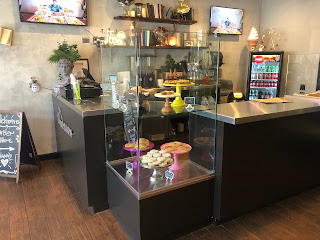 Recently Opened in Boystown
Over the last five years or so Chicago has gone from virtually no Venezuelan restaurants to what's now a couple handfuls worth of options. It's not all a feel good story though as many of the people behind these newly opened restaurants came to the United States to escape unrest in Venezuela. Many have opened restaurants as a means of making a living and also to feed many of those that have recently relocated and might be looking for a taste of the old country. Sugar Blow serves up some of the better Tequenos I've tried which admittedly aren't my favorite snack but also not something I intentionally avoid. My biggest beef with Venezuelan style cheese sticks is they're most always made ahead of time and thus served with cheese that's not well melted. That said these were pretty warm with a tasty tarter like sauce served on the side for dipping. Very popular in Venezuela. 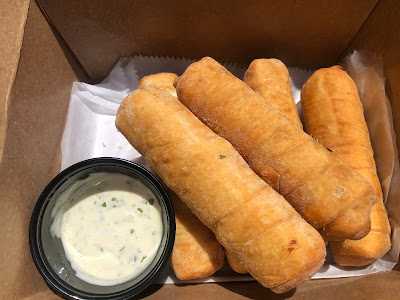 Lots of online reviews mention the sandwiches and the baguettes they use to build some of their interesting sandwich options. The bread is baked in house and comes stuffed with options like steak or chicken. The meats are grilled and then chopped down and all of the sandwiches come with a blanket of melted cheese on top as well as some standard food-service fries that are kicked up with a dry spice blend. The Chicken Sensation comes with grilled chicken, bacon, cheese, garlic sauce, and corn. It's an interesting sandwich that works well with the soft bread and combination of ingredients used. I was unsure how I'd like this one when I first saw it but I think I preferred it to the steak with plantains which was also really good and dressed in a similar fashion to the chicken. Dessert options like cupcakes and cookies are baked in-house and instagram worthy milkshakes are also popular. 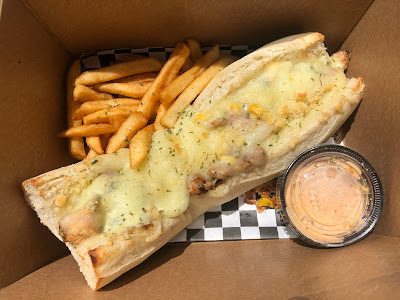 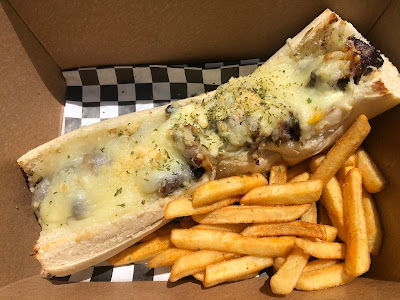