I notice the loaded baked potato making a comeback on the Southside. I remember back in my youth when a loaded baked potato bar could be found at a variety of spots including local hot dog stands like Michael's formerly of Lincoln Park. Actually they still have the baked potatoes on the menu at their Highland Park location. Wendy's and some QSR's of yesteryear also had baked potato bars. Cutie Pie's Kitchen is a spot who's loaded jerk chicken potato I've featured before. Today we trek over to Bronzeville to check out a newly opened blast from the past. Load-A-Spud is a full fledged potato bar. 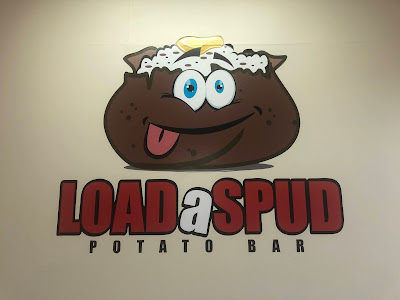 The setup at Load-A-Spud is a chipotle like model inside the former Love Taco space. It's in a small strip mall with parking. You can pick one of their 20 signature spuds or you can even build your own using any of the ingredients the husband and wife team have on offer. Options like a taco potato (seasoned ground beef, lettuce tomato, onions, taco sauce, sour cream) or a Shrimp or Chicken Alfredo offering can be had. All potatoes come with your choice of four different seasoned butters. While the popular on the Southside alfredo was on my radar I ended up going with a personalized potato made to mimic a fully loaded baked potato. This included real bacon bits, green onion, black olives, sour cream and cheese. The massive one pound + potatoes they use are split down the middle and ripped out so that most of it's insides are covered in toppings. They mentioned they have plans to open a few of these if this one goes well and so far, so good judging by a decent number of customers both in the store and ordering online. Who doesn't love a fully loaded baked potato? 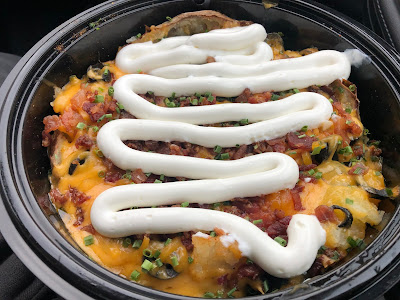