-Grubbing in Chicago
South Side Style Sandwiches in Englewood

Chicago is arguably ground zero for regional sandwiches in the States. We have almost two handfuls worth of original offerings we call our own. I'm talking about sandwiches like the Italian Beef and Jibarito that were born in Chicago and continue to thrive almost exclusively here. Today's post focuses in on one of the lesser hyped sandwiches that should really be more well known. It's the Sweet Steak sandwich who's history cannot be exactly traced to one place but many call the now closed Taurus Flavors (planning to reopen hopefully) the spot where it took off. Well Taurus Flavors was basically ransacked by a car that plowed through it, the building itself wasn't in good shape as is, so it's closed for the foreseeable future. That said there's plenty of other spots in town making Sweet Steak sandwiches and what's maybe my favorite comes from Hailey's Hoagies in Englewood. 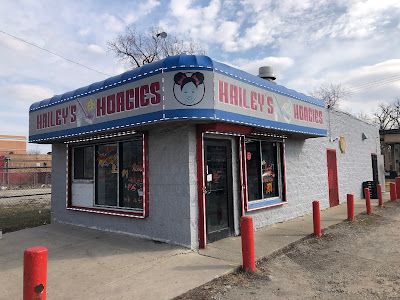 Locals Favorite in Englewood
So first things first what exactly is a sweet steak? I describe it as a deluxe style Sloppy Joe. The meat is chopped up steak that while not ground is close to it. The sweet part of the name comes from the sauce that's mixed in with the steak. It's most likely tomato based (it's red) and there's definitely some sugar in it (it's sweet) and possibly some bbq sauce too (it's smoky). It reminds me of Sloppy Joe sauce so with the addition of diced green peppers and sliced tomatoes on top it's kind of like a "deluxe" style Sloppy Joe. The biggest difference being these are served on sub rolls. As an article in the Chicago Reader from Ernest Wilkins describes - "That famed sauce, dubbed "proprietary" on one menu, varies in sweetness from place to place and visit to visit. As it soaks into the crusty bread, the sandwich takes on a texture akin to a dipped Italian beef". It's such a Chicago sandwich but for obvious reasons it's less heralded than others. This is a sandwich found exclusively in Black neighborhoods mostly on the South Side. Hailey's Hoagies on 63rd street is one such spot. 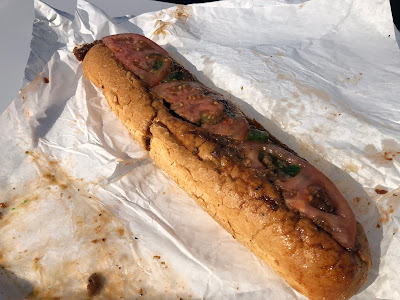 Sweet Steak Sandwich at Hailey's Hoagies
Pictured up above is a large which is two six inch sandwiches for around $10. They're offered in half sizes too. All the popular sweet steak spots will also serve up turkey hoagies. While this isn't a regional sandwich Chicago can claim it's own they're made in a certain style that makes them a regional treat all their own. You can get a turkey hoagie at a place like Monti's in Lincoln Square but it isn't going to be similar to the turkey hoagies served at the Black owned places like Hailey's. Thinly shaved turkey goes on the same rolls used for sweet steak along with thinly shaved onion, pickles, pepperoncini, American cheese, and special oil and seasoning. These have a unique profile to where I call them Southside style turkey hoagies. I have a hard time going to a place like Hailey's and not getting one of each. Last visit we took them over to Ogden Park with their signature berry shakes. 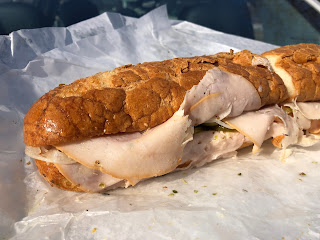 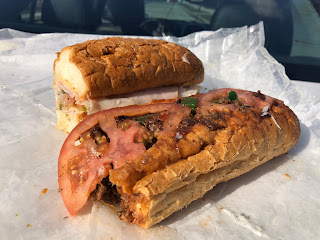