Chicago has been home to a nice sized Ecuadorian community going back to the mid 60’s when the first wave of immigrants started arriving from Ecuador. Thirty years later the city saw another big wave which turned Chicago into one of the country’s largest hubs for Ecuadorian food and culture. These days Chicago is home to more than 20,000 people of Ecuadorian descent. The first wave found themselves in areas like Logan Square where the city’s oldest Ecuadorian restaurant still resides. 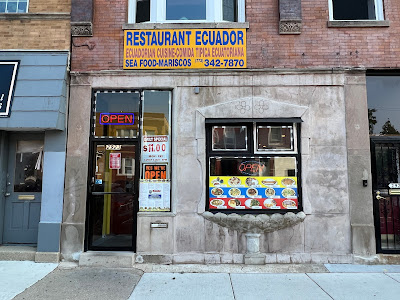 Restaurant Ecuador has been serving a taste of home to Chicago area Ecuadorians since 1984. Whenever I visit an Ecuadorian spot such as this I have to get an empanada to start. Specifically an Empanada de viento (fried cheese). These are a very traditional variety that can be enjoyed as an appetizer or a dessert. I prefer the former bc you can use one of the best condiments in town for dipping. An Ecuadorian meal served up in a restaurant will almost always include a bowl of aji sauce to be used as a condiment. Aji refers to both a species of chili known as Capsicum Baccatum that’s native to South America and it’s also a word used to mean chili pepper. The aji sauce in Ecuadorian restaurants will most always be a homemade variety so the recipes can very in both ingredients and heat. Restaurant Ecuador makes a medium hot version loaded with shallots, onion and garlic among other stuff. It’s terrific on everything they serve but especially the empanadas. If you prefer your empanadas to lean sweet you can ask for them served with a dusting of powdered sugar on top. It’s a win - win situation whichever way you choose to enjoy them. 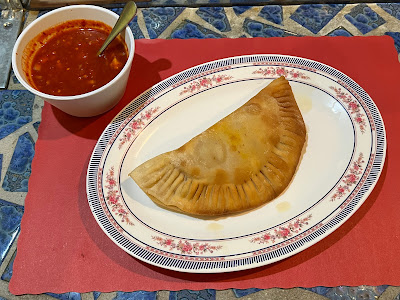 The Llapingachos is a great way to get familiar with Ecuadorian cuisine which is a merger of Spanish, Andean, and Amazonian cuisines. Llapingachos is a traditional dish of creole origin. It consists of fried mashed potato patties surrounding a cheese center that are topped with fried eggs plus peanut sauce. It’s typically served with some sort of protein and then a tomato and lettuce salad on the side. Here it comes served with a slice of steak plus a cup of white rice. If I’m being honest the beef isn’t needed as it’s a tougher cut that just gets in the way of the potato pancakes which are crisp on the outside, soft in the middle, and greatly enhanced with a creamy peanut sauce that’s poured over the top. The eggs give this dish a bit of a breakfast vibe making it a popular dish at all hours of the day. 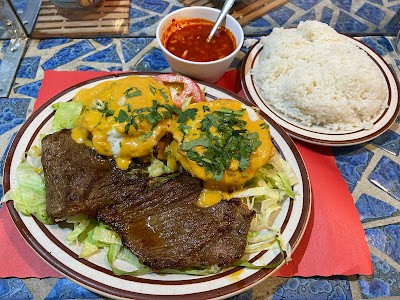 If you visit during peak dining hours and take a look around each table you’ll notice they all have big bowls of soup on them. Ecuadorian cuisine produces some amazing soups that can vary by geographic location. If you’re near the coasts then seafood is extremely popular as are meat soups up in the Highlands. Restaurant Ecuador makes a handful of options and the Caldo de Bola is one that I recently enjoyed. It’s described as a vegetable soup but it’s got lots of protein in the form of two types of tender beef including a big bone on chunk as well as a plantain stuffed with ground beef plus chunks of potato, carrots and onion. The broth is clearly homemade as it’s got a deep beefy flavor that the canned stuff can't match. With the winter weather rolling into Chicago you’ll want to have this spot bookmarked for the upcoming soup season as they make some of the best bowls in town. 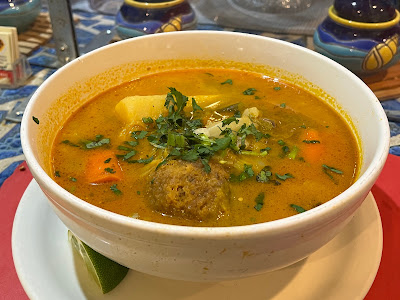 🧤🧤🧤🧤🧤🧤🧤🧤🧤🧤🧤🧤🧤🧤🧤🧤🧤🧤🧤🧤🧤🧤🧤🧤🧤🧤🧤🧤🧤🧤🧤🧤🧤🧤🧤🧤🧤🧤🧤🧤🧤🧤🧤🧤🧤🧤🧤🧤🧤🧤🧤🧤🧤
TAKE A MINUTE OF YOUR TIME TO READ THIS.
This is my story and how one person changed my life for good. I lost my job and there was no hope for me. I suffered looking for a job and luckily I came across Mr Mark Toray on a review about Forex, NFT, Binary, and Crypto trade. I borrowed $1000 from a colleague to invest with Mr Mark, thank goodness I made a profit of $12,500 on the first week, reinvested $2000, and cashed out the remaining balance directly to my bank account. I was able to pay my friend, and convinced him to invest as well. all this happens within a week. I'm very grateful to him for helping me manage my trading account. I will advise all of you who want to invest for the future and a better tomorrow should start with Mr Mark Toray. Some might think this is a joke, but a trial won't hurt. Give this a try and come back to thank me after. Contact him via: Telegram: @Mark4toray_fx, Email: Marktoray8@gmail.com