Every time it feels like I might be out of Chicago restaurants to check out I'll dig deep to find one. In the case of Kunafa Nabulsia I was reminded I wanted to try it by looking at my hit list, a note in my iPhone of places around Chicagoland that I have my eye on. Kunafa Nabulsia opened up at some point over the last couple of years but I had lost track of it in my list. Well I recently needed a place to eat and this was one of the closest spots with it’s location being on Pulaski just off of Elston. 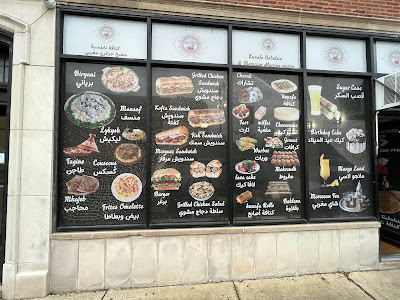 If you’re familiar with the dish the restaurant is named after you would assume this is a Palestinian or Lebanese or other Middle Eastern type of spot and it is in some ways including all of the pastries they serve but the food leans Moroccan and Algerian. I’m a little more familiar with the former than I am the latter but I would imagine their cuisines are pretty similar since they come from the same region (North Africa). I really liked the Mhajeb which is an Algerian flatbread made with semolina flour and a spicy tomato sauce with onions. It reminded me of Trinidadian Roti in that the ingredients are all pressed together. I read that this accompanies a meal in the same way as bread would. But it’s a large portion that can easily be lunch for one, and a cheap one at that ($3.50). 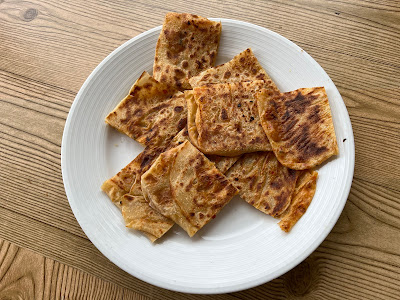 There’s no reviews of this spot on yelp but there are a few on Google. The majority of them mention the sandwiches which were what interested me about Kunafa Nabulsia in the first place. They have a merguez option which was intriguing but I gravitated towards the kofta bc it was a bit more interesting. They take a beef kofta kebab and chop it up with a bunch of grilled onions, mushrooms, and sliced jalapeño which all gets sautéed on a hot flattop in the same way a cheese steak or chopped cheese sandwich is made. They bake their own bread and it’s soft but sturdy enough to hold the mixture of meat and veggies. I highly recommend getting it with mayo which melts when applied to a hot steaming sandwich such as this, turning it into the consistency of cheese which I thought it might be before double checking the menu to see the sandwiches do not come with cheese. You get the option of fries or soup and the veggie soup is the way to go over some standard frozen fries, but they do season them up nicely. This was one of the best sandwiches I’ve had all year and I say that bc I’m already thinking about heading back for another sometime soon. Plus they do a daily special and on Friday’s it's couscous, which a few of the online reviews rave about. Check them out! 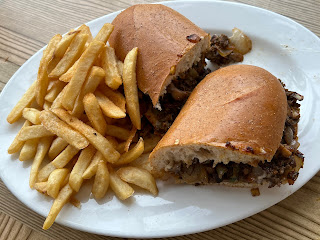 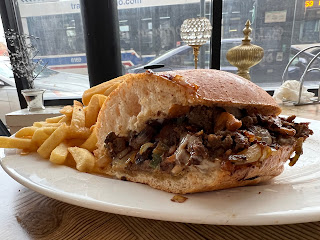