-Grubbing in Chicago(land)
A Ham Hotspot in Arlington Heights

It's going to be a while before the Bears become full time suburbanites but when they do I got a pre-game breakfast spot for you. I've said before somewhere on here that Arlington Heights and the surrounding Northwest suburbs have some really good food options. Particularly when it comes to Asian and especially when it comes to Japanese. The international food scene in this area is strong. So when ever I'm up this way it's usually something Asian as far as food goes. But sometimes I'm out here before any of those spots open which is how I found Mr. Allison's. A popular early morning spot. 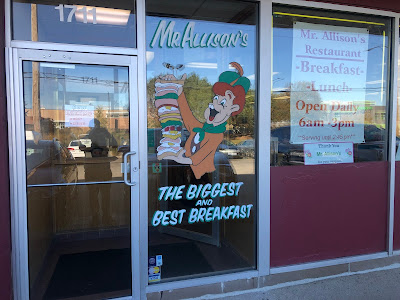 Locals Favorite in Arlington Heights
Mr. Allison's sits in a busy strip mall that houses a couple handful of businesses. It's the busiest of the bunch especially during breakfast hours. They're open daily from 6a-3p and feature all the classics as far as an American diner goes. But check the common mentions online and it's the ham that gets love in the majority of reviews. They serve cut from the bone ham in a variety of ways which means split pea soup is an every day offering. I suggest ordering a cup anywhere where ham is the focus. 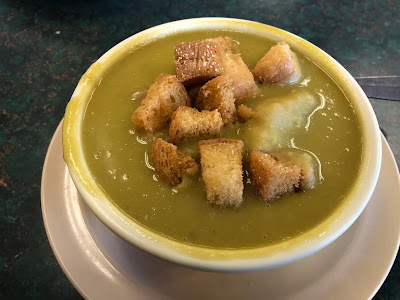 Split Pea Soup at Mr. Allison's
I went in with the intent of getting a ham sandwich and that's what I ordered, add a side of fries. First off the fresh cut fries here are a contender for some of the best in all of Chicagoland. Fried to perfect golden hue they're crisp on the outside and fluffy within. I was not expecting them to be that good. The ham sandwich is three thickly cut slices of tender ham dressed with lettuce, tomato and mayo. Pick your bread which was toasted white for me. This was a two hander meaning you needed both of them in order to not make a mess. It's a typical simple ham sandwich but also an exceptional one. 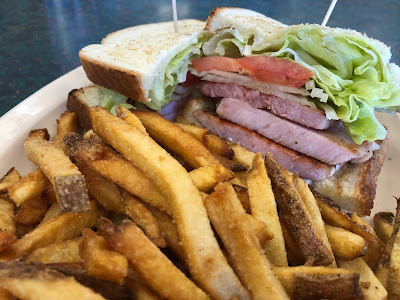 Ham Sandwich at Mr. Allison's
Perhaps the best part about this place is the fact you can buy an entire ham bone for something like $5. That's right, what's typically the most coveted part of a big ass ham roast is yours for the price of a bag of beans to cook with it. As opposed to having to buy an entire ham and what not. It wasn't until somebody online told me that this place was in Roselle and not Arlington Heights that I put two and two together and realized there must be some sort of connection between Mr. Allison's and Mr. A's. The latter of which is in fact in Roselle and has been featured on HERE before. It's a HAM WAR! 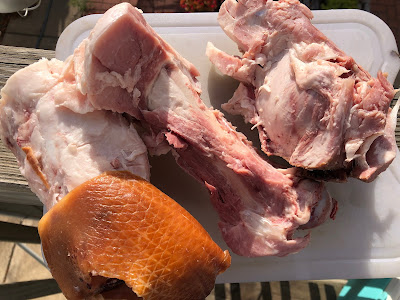