I've been keeping this post in my back pocket for the Holiday Season. It's fast approaching so here you go. Mr. A's is much like so many other Suburban diners. Found out by O'Hare in Roselle it sits in a newer building with it's own parking lot and can seat what's probably up to 100+ people. It's bustling in the morning with groups of locals both old and young stopping in for coffee, food, and chit chat. I cant say for sure but I imagine it's Greek owned like so many of the spots similar to it. 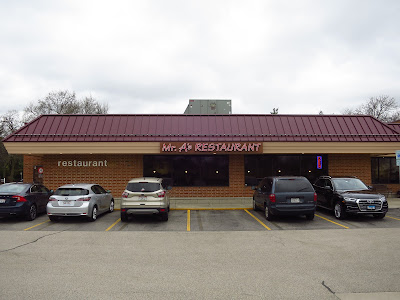 The menu is like so many other Suburban diners as well. In that you can find something for everyone on it. Mr. A's bills itself as Roselle's "Ham Headquarters" and features ham off the bone in many of it's recipes. One of them is the split pea soup. This is something that's most always going to be good at any spot where ham off the bone is featured. Mr. A's makes a very good version served with fresh made croutons and lots of diced up ham meat. You can see from the green color it has deep flavor. 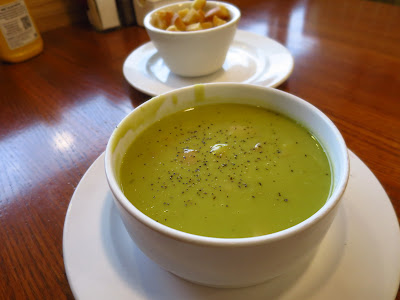 I didn't have to browse the menu too much to find what I wanted. The Number 1 is a big king slice of ham with three eggs, American fries, and toast. A bargain at just $8.50 considering this is easily two meals worth of food. The ham had four different parts which you can see from the picture. Both the inside and outside pieces were slightly different in texture though equally delicious in taste. The American fries are sliced potatoes cooked up on the flattop. They're good albeit plain so some hot sauce is useful. As expected the star of this plate is the ham which was great diced up for leftovers. 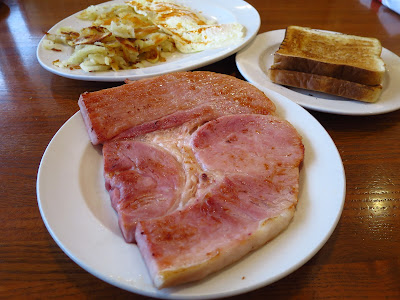 But the reason Mr. A's caught my eye was I read that you can get ham bones to go from here. Ham bones being what's left of their bone on hams when they strip them of all the meat. I'd never heard of a place doing this as they make for a great base for soups and bean dishes and thus are coveted. Some people like the ham bone more than the actual ham itself. What I'm saying is it's a valuable ingredient in the cooking world and Mr. A's sells them for something like $3/$4 each. I bought two and couldn't believe how heavy the bag she handed me was. Not just that but there was a really nice amount of ham meat on each bone. I ended up using them with some Ranch Gordo beans I had brought back from Portland earlier in the month. They were great. I'm sure these bones aren't always available but from what I was told they have them most of the time. Worth the ride for those alone. 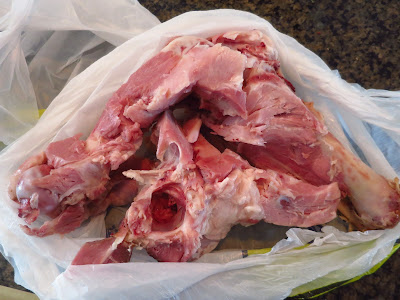