Nothing was normal this year and neither is my annual year end best of list hence the asterisk in the title. Like everyone else I’m ready for 2020 to take a hike. But the reality is covid won’t be going away forever with it. Dining indoors is still likely to be a no go and even if it’s allowed it’ll take time for people to get comfortable doing so. It’s going to be a long winter. So let’s do our best to continue to get takeout from our favorite spots no matter how sick of it we are. Truth is I’m sick of doing takeout and I’m sick of cooking so I’m planning on taking a sabbatical of sorts for the upcoming colder months. I don't really have a choice bc 1) I cant go out and eat and 2) most people aren't going out to eat so there's no point in encouraging others to do so. Plus takeout just doesn't photograph well nor should it be the only way one experiences a restaurant. The food is never going to be better taking it to go.

But we still need to provide our favorite restaurants with enough business to survive on. So my first round-up of the past dining year will be a shoutout to the spots that have kept me well fed during the pandemic. Usually I only list places that I posted about in the past calendar year but nothing is normal this year. So it was nice to have some reliable go-to's as far as food. Spots you can always count on. 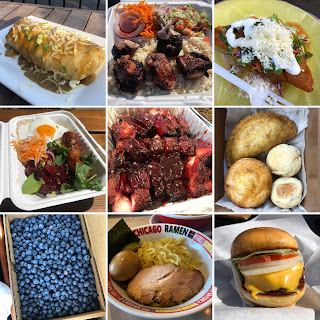 For the second straight year (and maybe longer than that) the dry chili fish filet from New China Station was likely my most ordered item. It's my go-to dish when I'm not really sure what I want. It's location (5 min drive) makes it easily accessible which is part of the reason I get it often but at the same time I don't eat anything I don't want. It seems I find myself wanting this dish more than most others. It's basically comfort food for me at this point and we've all needed extra solace in 2020.

Quite a few weekends this year have included a 1-2-3 punch that consists of a drive over to Tamales La Bendicion where I pick-up what are maybe my favorite traditional Mexican style of tamales in the city. From there I scoot over to Tacos El Tio where the weekend special consomme con carne remains my favorite prep of birria de res in town. From there it's over to Tacos de Canasta Rossy where they make arguably the best specialty tacos in town. Take a weekend to try this trio in 2021.

One of the best stories of the past year or so was the return of In-On-Thai now in Uptown. Originally they opened in Lakeview but the building they were renting in was sold to condo developers and almost two years later they re-appeared in Uptown. We went a few times before any of us even knew what covid was and then it came and so did the indoor dining restrictions. There's no outdoor space so they've only been able to do takeout for most of what was supposed to be their return to the top. Well covid didn't stop that from happening completely. They've gained some regular customers myself included as it's become clearer with each takeout they really dont have anything not worth ordering. It's got to be one of the best menus in the city just bc of this. Seriously if it sounds good it probably is. Especially anything that includes fish and all curries. This place is a gem. I thought I posted about it but I guess not. I will in 2021 but read this Mike Sula feature from the Reader in the meantime.

I was asked to name the best restaurant opening of the year over at Eater (they should be sharing the survey this week). Because of the circumstances I named Flour Power in Ukrainian Village as the years best new restaurant. I didn't get a chance to try as many new spots as I normally would have without a pandemic but this opening was pretty much geared for it whether they knew so or not. Even before covid places like Flour Power were popping up. They make a few fresh pastas a day and that's about it. If you've ever been to the now defunct Il Corvo in Seattle you'd be reminded of it at Flour Power and that's by design. Check their instagram for daily offerings. Every day brings a new menu.

Some Chicagoland favorites from this past calendar year that were featured here include the following:

- Street Tacos in the Back of the Yards

Readers can normally count on monthly posts from places beyond the Chicagoland area but 2020 was the year less traveled for many of us. That said I still got the chance to add a few destinations to the 'Chowing Travel Guide' this year:

Palm Springs isn't exactly a world class dining destination but the burger at Tyler's worth seeking out. The date shakes are also really good as is the Mexican food which has a heavy Mexicali presence.

Summer in Michigan is always a popular destination for Chicagoan's and that was especially so this past summer. Roadtrips were the main source of travel or so it seemed. We spent some time in Western Michigan which I firmly believe has some of the best beaches (and blueberries) anywhere. We made Grand Rapids our base and I was pretty impressed with Michigan's second largest metro area. There's an amazing beer scene and the food options aren't bad at all. Eat a Wet Burrito or check out Chez Olga if you like spice and Yesterdog if you enjoy Roadfood type hot dog stands.

We wont call it a travel destination but if you're ever in or around the Peoria area there's always interesting places in towns such as this. If timing allows you to check out Susie's Hot Dogs in Morton it's worth the stop. My pick for '2020 Roadfood Stop of the Year'.

Omaha Nebraska is one of those cities that doesn't make most peoples top spots they want to visit. But most people don't have a bucketlist that consists of the entire United States. I'd always thought that Omaha had what seemed to be a ton of Roadfood type dining destinations and that they do. Bc we were just passing through I didn't get to eat through it like I would've liked but I enjoyed all three stops I picked which give you an idea of the local food scene. It's a mom and pop type city.

Another spot checked off my regional American food bucketlist was Denver Colorado. We drove out in October since there was never a better time to go to a spot where there's lots of stuff to do outdoors. But aside from all the great trails and hikes we took - this trip (for me) was also about indulging in the city's signature style of regional American-Mexican food called Den-Mex. I'd always wanted to get my fix of crispy tacos, chile rellenos, and the almighty Mexican Hamburger. Lots of green chile too.

Lastly I got a chance to add another Mexico destination as we visited the Riviera Nayarit way back in February before the world turned upside down (America still hasn't been turned right-side up). We made Sayulita our base for five days of seafood and sun. I'd go every winter if I could somehow make that happen. For a town of just 3000 people there's some good food to be found.

I'd originally thought of making 2020 the final year of S'C'&C but then came corona which has paused the posting twice now in the last year. So I don't want to call it quits while there's a ton of stuff I have yet to post about going as far back as a piece of I've been working on for over five years. So you can expect to see us again in 2021 but probably not for a couple months. But when it's back on - it's on!