Chicago's ramen boom took a bit of a break during the first half of 2019. Then it came roaring back toward the back end of the year. There's been a handful of ramen shops to open in the Chicagoland area the last four months or so. As per usual most of them feature tonkotsu though one spot in particular stands out when browsing through them all. Menya Goku opened right at the start of the new year. This after a soft opening at the end of December. It's location is on Montrose across the street from Welles Park two doors down from Taqueria El Asadero. We visited on opening night. 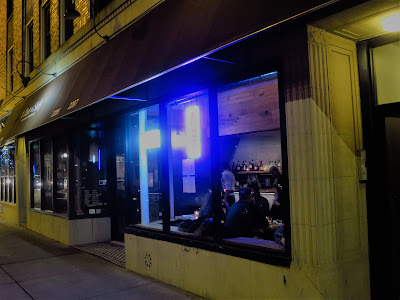 Newly Opened in the Ravenswood area

Menya Goku is the latest project from the Wasabi Ramen team. Aside from their original Logan Square location they also run Ramen Takeya in Fulton Market. At Takeya they specialize in chicken paitan ramen instead of the pork broth tonkotsu that dominates the American ramen scene. Goku is offering two different bowls neither of which are Tonkotsu ramen. They're serving a shoyu ramen and also a Tantanmen. More on those in a minute. The menu is small and the space is tight too. There was a small line of people waiting to get in on opening night and I've driven by a couple times since then and seen it full. No to-go orders as far as ramen as the neighborhood is coming to learn. They do however have a small list of izakaya type appetizers including a plate of Nagoya Pirikara wings. Fried wings are big in the Japanese city of Nagoya and these are made in the popular style there. 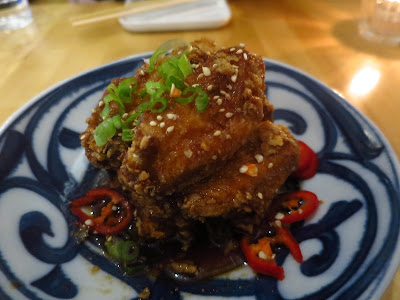 The wings were good but they're not why we showed up opening night. Menya Goku has just two options of ramen on the menu and one of them is a spicy Tantanmen style. I'd heard the shoyu (soy sauce) is really good too but the tantanmen was what really caught my eye. Tan Tan is the Japanese take on Sichuan style Dan Dan noodles. It's tough to pick one but a good bowl of Dan Dan is hard to top as far as my favorite Asian noodle dish goes. I also like ramen and so Tantanmen is appealing to me. I tried the Hiroshima style brothless version of Dan Dan while in Osaka and didn't love them as much as I thought I would. So while a big bowl of broth isn't typical in a bowl dan dan noodles the heat in Tantanmen is. That comes from the Sichuan peppercorns that leave your mouth feeling a bit numb. Manya Goku seems to use quite a few in their pork based broth served with ramen noodles and ground pork with bok choy, green onion, bamboo, sesame paste. Ok so this is a pork broth based ramen but it's not your typical bowl of tonkotsu. In fact it's my new favorite ramen in the city. 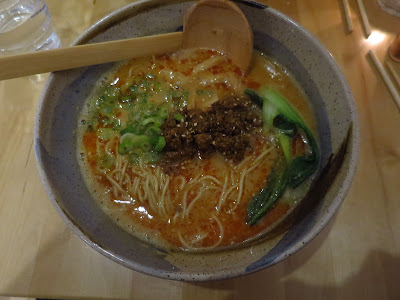 INSTEAD OF GETTING A LOAN,, I GOT SOMETHING NEW
Get $10,050 USD every week, for six months!

See how it works
Do you know you can hack into any ATM machine with a hacked ATM card??
Make up you mind before applying, straight deal...
Order for a blank ATM card now and get millions within a week!: contact us
via email address:: besthackersworld58@gmail.com or whats-app +1(323)-723-2568

The price include shipping fees and charges, order now: contact us via
email address::besthackersworld58@gmail.com or whats-app +1(323)-723-2568