One of 2019's most anticipated restaurant openings didn't take long to deliver. When it was announced last year that Chef Dave Park was closing his modern ode to Korean classics out in Westmont it was a big loss for the Chicagoland food community. Many of them myself included made the trek from the city out west where Chef Park was working out of a food stall in a rundown Asian mall. It wasn't just one of the best Korean restaurants in the region it was one of the best eating experiences of any variety. Despite the enormous amount of trouble that came with running a kitchen in such a tiny space both Park and his partner Jennifer Tran were able to please just about everyone who ate at Hanbun. But it was never meant to be the final act. They eventually decided to close up shop in Westmont and start looking for a place in Chicago. When that became news, Jeong as it would later be named, became one of the years most anticipated spots. Well, they've arrived. 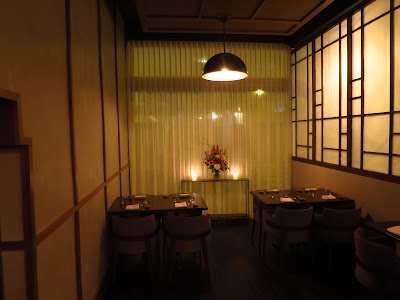 Park and Tran eventually settled on a strip of Chicago avenue that's slowly becoming a dining destination for the city's food lovers. Located at the corner of Chicago and Greenview in a nondescript spot you'll want to make sure you make reservations if you're reading this fresh off the press. I got a 9pm the week before and it was the only time slot they had left. Well I'm happy to have taken it bc our meal at Jeong was in the running for best of 2019 thus far. One of the things that Chef Park was known for at Hanbun was his tasting menu. Bc of the late reservation we were coming from another one of the city's hot openings so we would not be doing the tasting menu this trip in. I actually wanted to try the items from the ala carte portion more so than those on the tasting menu anyway. 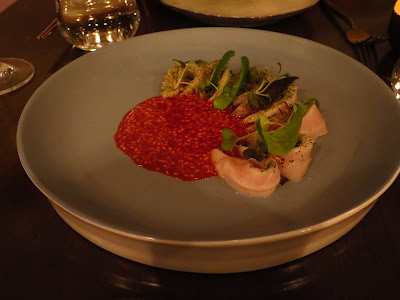 
My favorite dish of the night may have well been a starter of sashimi made with mackerel. But this doesn't mean it was all downhill. Still I loved how well mackerel worked as a sashimi and when dragged thru the sesame chojang dressing it was one to remember. Having worked in the kitchen of some of the city's most respected restaurants you can consider Chef Park a classically trained chef so to say. He's taking the food of his culture and basically putting out contemporary plates of some of his most fondest dishes having grown up in a Korean household. No better example of this than an order of mandu - the Korean word for dumpling. The kitchen hand makes these with kimchi / pork stuffed inside. They're served in bowl lined at the bottom with a cucumber emulsion and topped with Thai basil. Another dish that I could eat for breakfast, lunch, and dinner and still be fine with having it again the next day. This would pretty much be the case for every plate we ate. Nothing here bored. 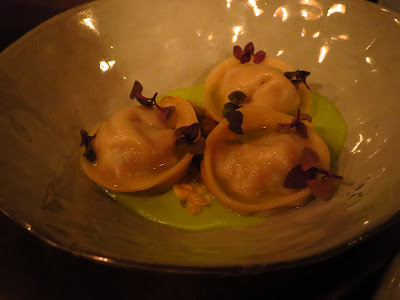 I judge a plate of food solely on my reactions. The more a dish makes me thing the more exciting it is. All I could do was think about what flavors I was tasting in an order of tteokbokki. Korean rice cakes seem to be having a moment right now which is probably a direct benefit of Korean cuisine having become mainstream. For some reason I tasted barbecue in these. I have no idea why and wouldn't be surprised if others who've had this dish are wondering what I'm talking about. I just felt like I'd tasted the flavors before but I couldn't quite pinpoint what they were. The menu lists schmaltz, pickled mustard, quail egg, charred cabbage, spicy chili sauce. All I know for sure is it's fantastic. 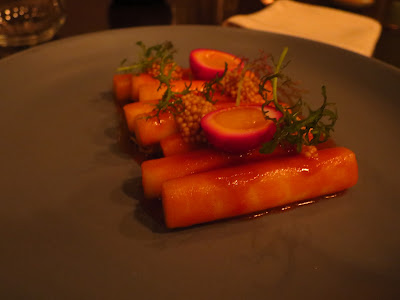 The ala carte menu offers just four entrees but I wouldn't be surprised if they're all extremely well done. Of the those on offer the duck confit sounded the most delicious to us. They pressed a bunch of meat into a rectangular shape of confit that was blackened crispy on top and bottom. The block of duck confit came served with kabocha, sesame leaf kimchi, duck & gochujang jus. Some fresh citrus was the perfect compliment to the meat. We both agreed we may have to come back for more of this. 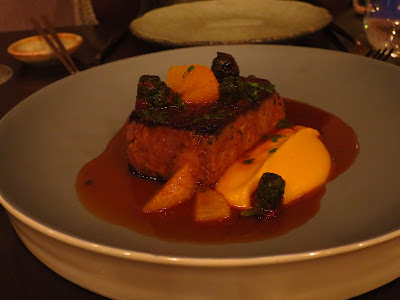 We don't always get dessert but with how well it went up that point we had no choice. Especially when I saw an option described on the menu as 'rice - hi chew mochi. Omija meringue. mokgeolli sherbet. roasted soybean powder. Grapefruit.' I'm not even sure what all of these are but it was a super refreshing ending to a fantastic meal. I much prefer the fruity desserts to ones with chocolate and such. If you're looking to try a new spot for a nice night out I highly rec you do Jeong soon. 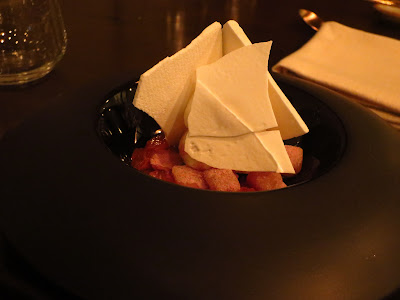