The fact that there's still some Chicago classics to cover says alot about the dining situation in this city. Actually the fact that the story behind this longtime cafe on Argyle in Uptown has never been told also says alot. What does it say? When it comes restaurants and the stories behind them we have an abundance of options as far as what to eat and what information to seek. This is a good thing. I'm not exactly going to be able to tell you the story behind Double Happiness. It appeared in the Reader years ago focusing on the food. That said the mysteriousness is part of the charm. 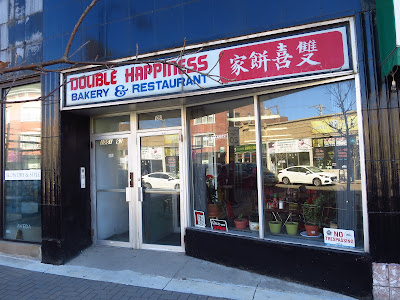 Whenever people ask about my favorite place on Argyle my answer is this old school spot that feels more like a diner than a noodle shop. They’re usually surprised to learn there’s no pho on the menu but that’s partly why it’s my favorite. They offer a small menu of dishes you won’t find everywhere else. Heck it’s not even Vietnamese. Though it’s very possible the owners are Chinese-Vietnamese. Without much communication with ownership I’m guessing the specialty here is Chiuchow style noodles via Chaozhou of the Guangdong Province of China. This makes sense when you consider that the Teochow people (native to this area) are the largest Chinese ethnic group in Vietnam. It's quite possible the owners of DH went from China to Vietnam to America. The reason this is all hearsay is it's pretty hard to communicate with the older aged staff as far as anything past what you want to order. Well that I can help you with. For starters a fresh made radish pancake is your first move. This I was told is another sign that this is most likely a Chiuchow spot. Regional Chinese! 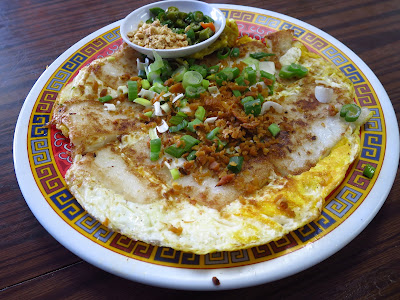 It's funny that at a time when we Chicagoan's are lusting hard for regional Chinese food there's a spot like Double Happiness where they've been practicing it for decades. Chiuchow noodles have a flavor and presentation profile more like that of noodles in SE Asia than China. I read a piece in 'LA Weekly' that explained this is likely due to immigration and commerce patterns that saw people from the Chiuchow region move to SE Asia. Double Happiness offers a list of noodle soups but it's the #1 (on the menu) dry noodle soup that is most representative of this regional cuisine. Egg noodles are cooked and then drained and tossed in soy and fish sauce and who knows what else. Little chopped up pieces of pork as well as seafood, chopped peanuts, and a slice of pate (?) are thrown on top. Some cabbage sits at the bottom while a little cup of chicken broth comes on the side. To me this dish is the closest thing to some of the wonderful noodle dishes I ate in SE Asia a couple years ago. I have no other Chiuchow spots to compare this place to bc this is it as far as they go in Chicago. 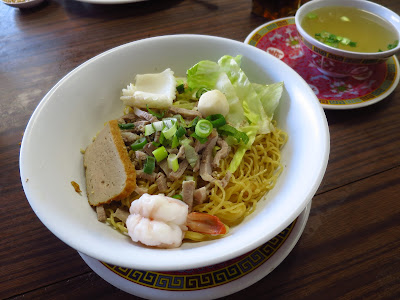