There wasn't quite as much hype with Bonchon as there was Jollibee but maybe there should have been. If you read my review on Jollibee the famous Filipino fast food chain just wasn't for me. Bonchon is a famous Korean fried chicken chain with a similar cult-like following to Jollibee. Based out of South Korea the chain has locations there as well as the Philippines, Thailand, and Indonesia as well as six US states now including Illinois. The first Chicago location can be found in Chinatown. 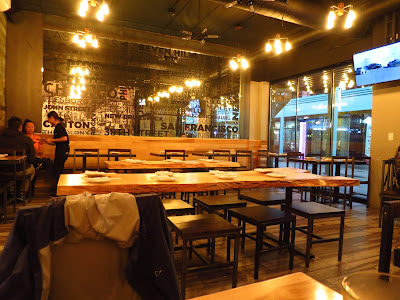 Bonchon is known for it's crispy fried wings that come in only two flavors. Those being spicy and soy garlic. They come in pretty large orders with 10 ($12.95) being the minimum during dinner. First time visitors should go half and half on the flavors in order to decide which one they prefer. I definitely liked the soy garlic more as the spicy was a bit too salty. Still these were some of the better Korean wings I've had due to the sheer crispness of the skin. That and the fact the meat was damn juicy made for an excellent batch of wings. I've been wanting more ever since the last one was ate. We also got an order of gyoza which was good in that it always is. Bonchon has a bar that serves drinks and has tv's with the games on when being played it's slightly more upscale than fast food. According to their website they have a couple more Chicagoland locations coming with Glenview next in line. 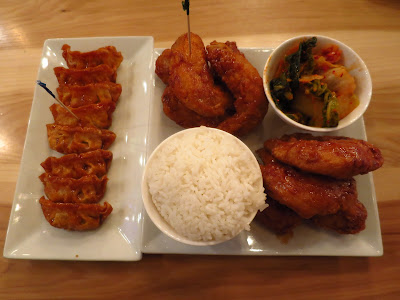 Bonchon wings are the truth. Had them in northern Virginia, and I loved the hell out of them.