There will always be diamonds in the rough out there but with each passing day they become harder to find. There isn't much in the food world that hasn't been uncovered these days. Leave it to a fine publication like the Chicago Reader and it's best in the biz food writer Mike Sula to uncover yet another gem. I have no idea how I'd never known of the Balkan Grill Company at Exit 9 in Gary, Indiana but it's always exciting learning of something new. Balkan Grill sits in a tiny trailer smaller than most of the trucks that are stopping to fill up on fuel in the lot it shares with a gas station. 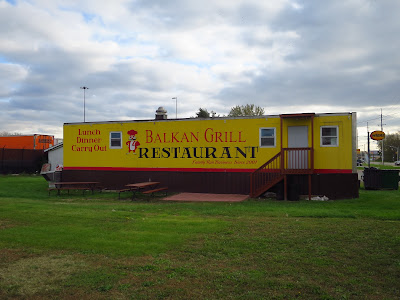 Truckers Favorite in Gary, IN

You can read all about this place and it's history in the aforementioned Reader article. It's been around a little while and during that time they've become known amongst Eastern European truck drivers for having some of the best Serbian food around. Everything is home cooked to the point where the guy taking orders will tell you "15 minutes!" as soon as place your order. There must have been about 10 truck drivers who stopped in for pickup most of them likely repeat customers having called their orders in. It's almost exclusively takeout but there are three tables with 6-7 chairs to dine in. 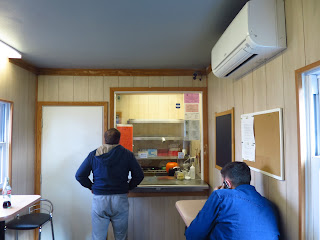 The menu boasts lots of Serbian classics many of which Mike Sula profiles in his piece. I'm sure it's all good and over the years I plan to try more but for now the Cevapi are the best I've ever tried. Cevapi FYI are little skinless grilled sausages usually made with beef but sometimes both beef and pork or lamb. Commonly found in the Balkans they come served with a really fluffy but sturdy well buttered flatbread called Lepinje. At Balkan Grill they give you two different butter like balls of Kajmak. The red one I believe was mixed with red pepper paste. Also on the plate is lots of diced raw onion and crispy cabbage. This was the best plate of cevapi I ever ate not just bc of the taste which was great. But also the texture. These had snap like that of a natural casing wiener. I'll be back fast. 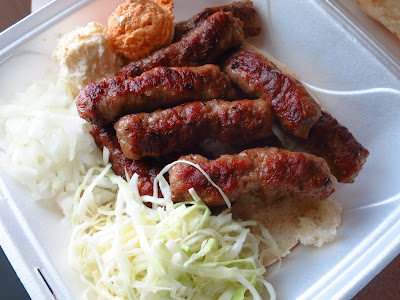