I admit to being fascinated by restaurants in gas stations. They might mostly be crap here in the North but I swear I've had some great eats at gas stations down in the South. I dont if KorFusion applies as gas station food as it's not attached to a gas station but it does share a lot with one. I noticed them one day around the time they opened and knew I would eventually make my way over. A favorable review in the Tribune would remind me I wanted to check it out which I did not to long ago. 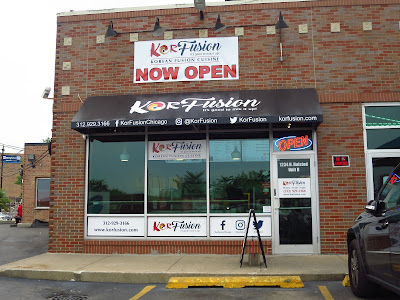 KorFusion sits in the back of the lot of a Mobil gas station on Halsted just North of Division. I dont know if others have noticed but 2017 seems to the year of Korean Food. KorFusion is the Chipotle like fast casual concept of the handful of Korean spots to open up shop. You choose how you want to consume your food (bowl or burrito) and then decide what meats you want as well as veggies etc. All of the toppings are sitting on display in front and it's a very colorful scene when choosing what you want with your bowl or burrito. I got a bowl with beef bulgogi over kimchi fried rice. I got to choose three sides and went with the Korean Giardineria, julienned squash, sauteed shiitake mushrooms. The beef was nice and tender while the veggies were all fresh and the fried rice packed a small but tasty punch. This might not be destination dining but its a great neighborhood type lunch spot. 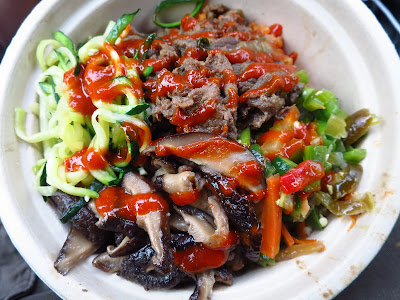