Let's face it, Chicago's food truck scene is weak. This is thanks to some absolutely stupid people that somehow got themselves elected to office. Our political system in Chicago is crap so it's no surprise that they're handling of food trucks is the same. You have to overcome alot of odds just to be a successful food truck, let alone a food truck turned brick and mortar. But that's just what the folks behind DMen Tap did. Ask them and they might say they we're forced to open a B&M for the simple fact that it's near impossible to run a food truck in this town. Either way we all win with this one. 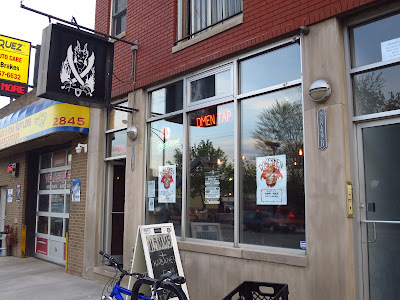 Sitting on what's a rather desolate stretch of Belmont just off Elston is the location of Avondale's newest bar. It's not far from Kuma's so it's no surprise to see the bar has the same style as far as food and beer. The difference being DMen Tap doesn't do burgers. They do European style Middle Eastern food specifically Doner Kebab. I'd featured the truck before and my only problem with it is the fact lines caused the product to be rushed. The food wasn't as good as it could be due to rushing. 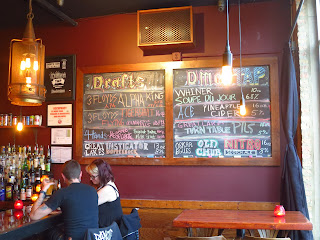 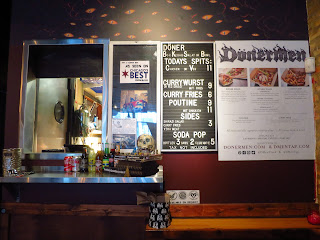 Now that DMen Tap is the hub for the DMen food it's a much better match. The food is served separately at a window in the back of the bar. A quick glance inside the kitchen reveals a big spit of chicken shawarma spinning away while getting the necessary time to crisp up perfectly. The menu remains pretty much the same with that chicken available in a bowl over fries and or in a wrap which is made one of two ways. I opted for the flatbread pita and found the sandwich to be fantastic. Whatever it was missing when served off a truck was no longer hiding as this was full of flavor. Well charred pieces of chicken are topped with fresh tomatoes (in winter!) as well as sliced red onions, lettuce and a very tangy sauce using harissa as it's base. This is an excellent sandwich aside a beer. 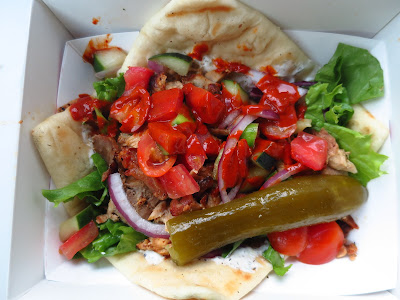 As good as the chicken sandwich was it's taken a backseat to my new favorite sausage dish in town. I recently tried the Currywurst on offer here for the first time and fell in love with it as a dish. Currywurst is to Germany as the Chicago dog is to Chicago. You can find this snack just about anywhere in Germany's big cities ala Berlin. Its usually made with a veal and pork blend and is always sliced into pieces that can be easily ate. It's then layered on a bed of fries and sprinkled with curry powder. A tomato based dipping sauce comes served on the side. I have no other Currywurst to compare this to but it's immediately shot into my regular dining rotation. Might go get some tonight. 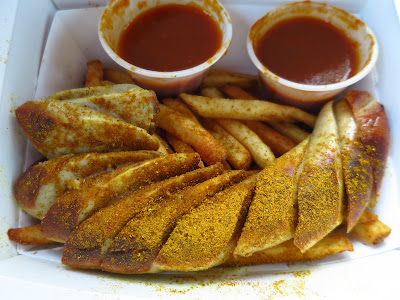