I've yet to hear much chitter chatter about a former Tru Chefs newest venture. So allow me to start some. Curious 'A Chefs Playground' is Chef Laurel Khan's new restaurant in Ukrainian Village. Chef Khan worked with Rick Tramonto at Tru before going off to Washington. She's since returned to open Curious which sits on Chicago avenue just West of Damen. We recently enjoyed a relaxing meal here. 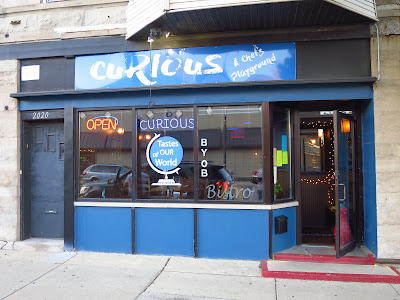 The menu features a rotating collection of chef favorites. Rather than being limited to one country or one cuisine you may see something with Italian roots one night and then taste something with Indian spices your next visit in. This doesn't mean a never ending menu of unlimited options but rather an ever changing menu that sometimes isn't complete until the morning of service. The chef cooks dishes that comfort her and the hope is they will do the same for the customer. This customer (me) was very happy with what we ate on our visit. Which was basically everything as the entire family was dining in as we celebrated Mothers Day. First up was a house baked bread with giardiniera baked in. Served with a well whipped butter this was an addictive piece of bread. In fact the next day I toyed with idea of walking in and ordering some for carry out to eat alongside some pasta I made. 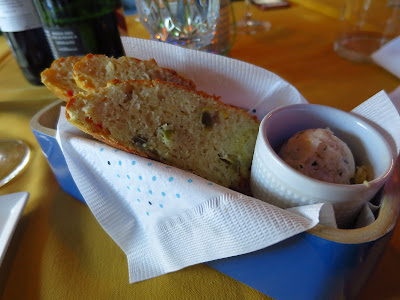 Giardiniera Bread and Fresh Made Butter

Continuing along with the appetizers we also got a couple plates of fried green tomatoes. These had a light breading that stuck really well but I slightly prefer the cornmeal crusted variety. Still for city slicker standards these were better than most North of the Mason Dixon. Crisp and nowhere close to mushy they came with a bit of red pepper sauce on the side and that tasted great spread on the tomato. 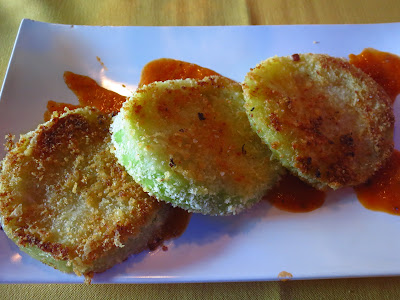 A big bowl of clams with chunks of fish swimming in a tomato based sauce was another winner from the kitchen. The sauce was very well balanced and all of the seafood in the bowl was cooked to perfection. We ordered another round of bread and used it to mop up the addictive sauce. 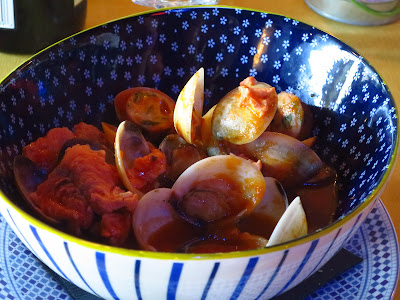 Onto the entrees where a few different plates were on offer that evening. Fresh Scallops with a really fresh mango sauce was ordered by a few people at the table. Admittedly scallops aren't something I care to order in a restaurant. Especially when there's much more interesting stuff on offer. Nonetheless the trend of well cooked seafood continued with this dish that came served with a curried rice and roasted cauliflower dish. I thought both of them were really well made. 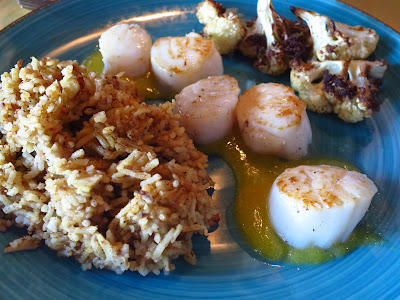 Parmesan dusted whitefish was fried in a pan and had me thinking of taking a trip up to Minnesota this summer. It came served with a dill tartar sauce that was much better than the typical stuff. 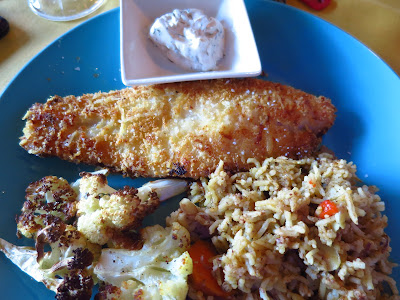 Chicken Ravioli with Pesto Ricotta Cheese, Thyme Cream Sauce, and Veggies tasted just like that but ate like Biscuits and Gravy. I say this because the dish was served deconstructed so to say. So it wasn't ravioli but rather a big bowl of noodles with charred zucchini and strips of tender chicken swimming in a decadent bath of cream. Thinking back there were no misses on the night. 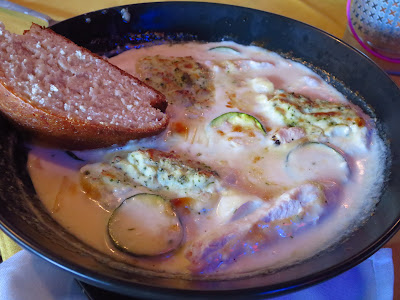 While everything we ate up until now was good I thought I ended up ordering one of the better things I've ate of late. I decided to try the Brazilian Shepherds Pie made with minced steak and chorizo that came with a cornbread crusted top. Loved the idea of corn bread being the crust and the meat mixture was really comforting which is pretty much the first word that comes to mind when thinking about this meal. Most entree plates are around $18-$21 and with it being BYOB (for now) this makes for a pretty affordable place to go for a nice dinner out. Check it out should you get the chance. 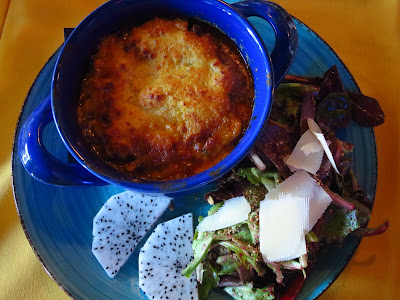