While the Ramen hype doesn't seem to be dying down anytime soon, my love for it somewhat has. When compared to last winter I've slurped much less ramen this current one. Part of it might be the overall quality but then at the same time the Chicago ramen scene has never been better. Enter Furious Spoon. Anticipation for the new ramen shop located on Milwaukee just east of Damen has been building since the sign announcing its coming was put up. More buzz followed when the news it was being opened by Shin Thompson was made public. Chef Thompson is a well known Chicago chef who had featured ramen on his menu at the now defunct Kabocha. 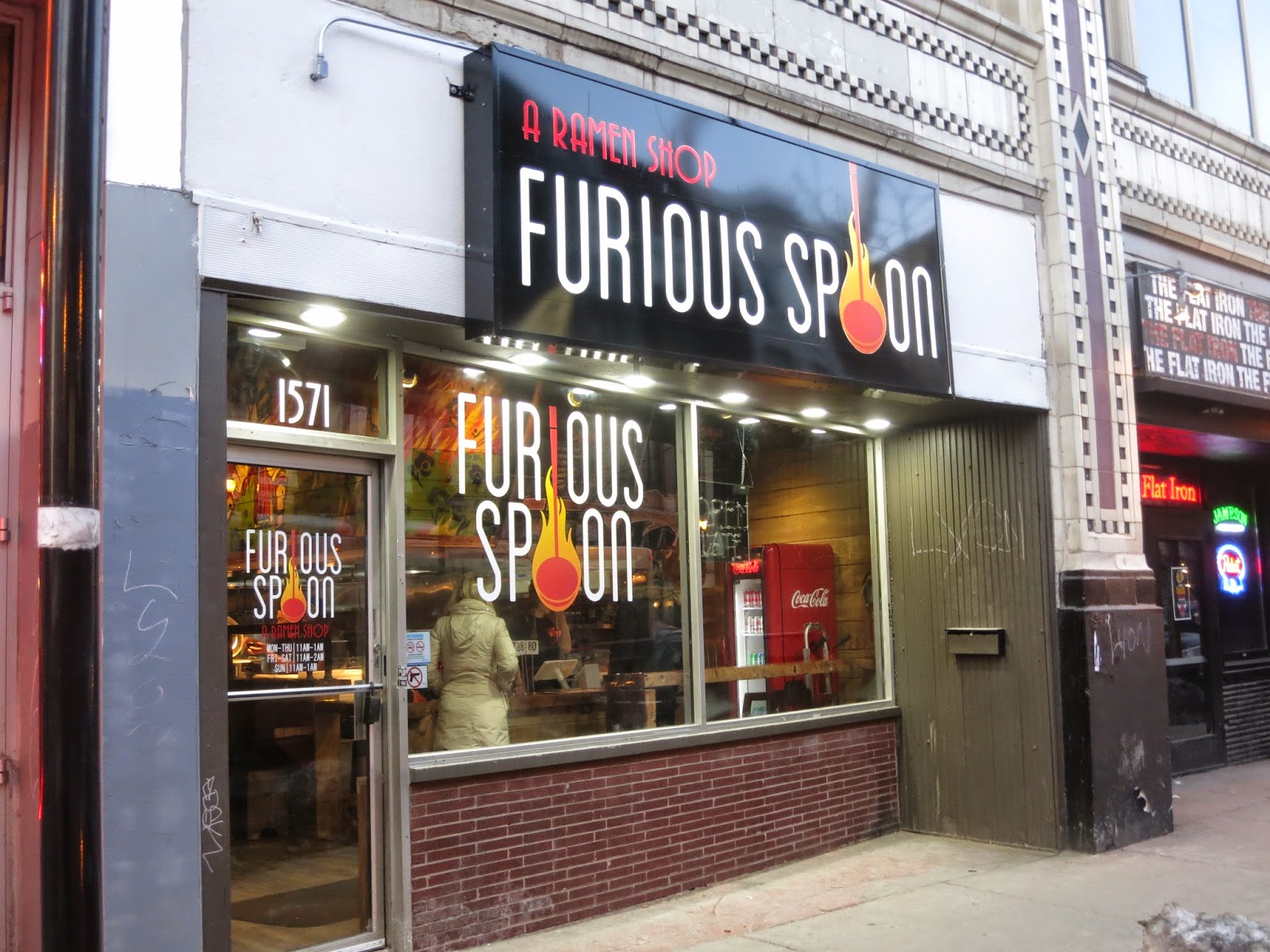 Furious Spoon is the Chef's vision of a traditional Japanese ramen stop. As opposed to his previous places of tenure this is the most casual and moderately priced of the bunch. I believe it was funded via Kickstarter. The menu is pretty simple with ramen being the obvious focus. There's a few small plates like housemade dumplings and char siu over white rice however they were out of the potstickers when I stopped in. The setup is simple. You step inside and wait in line if there is one. After placing your order at the register and paying for it you get a number and go find yourself a seat 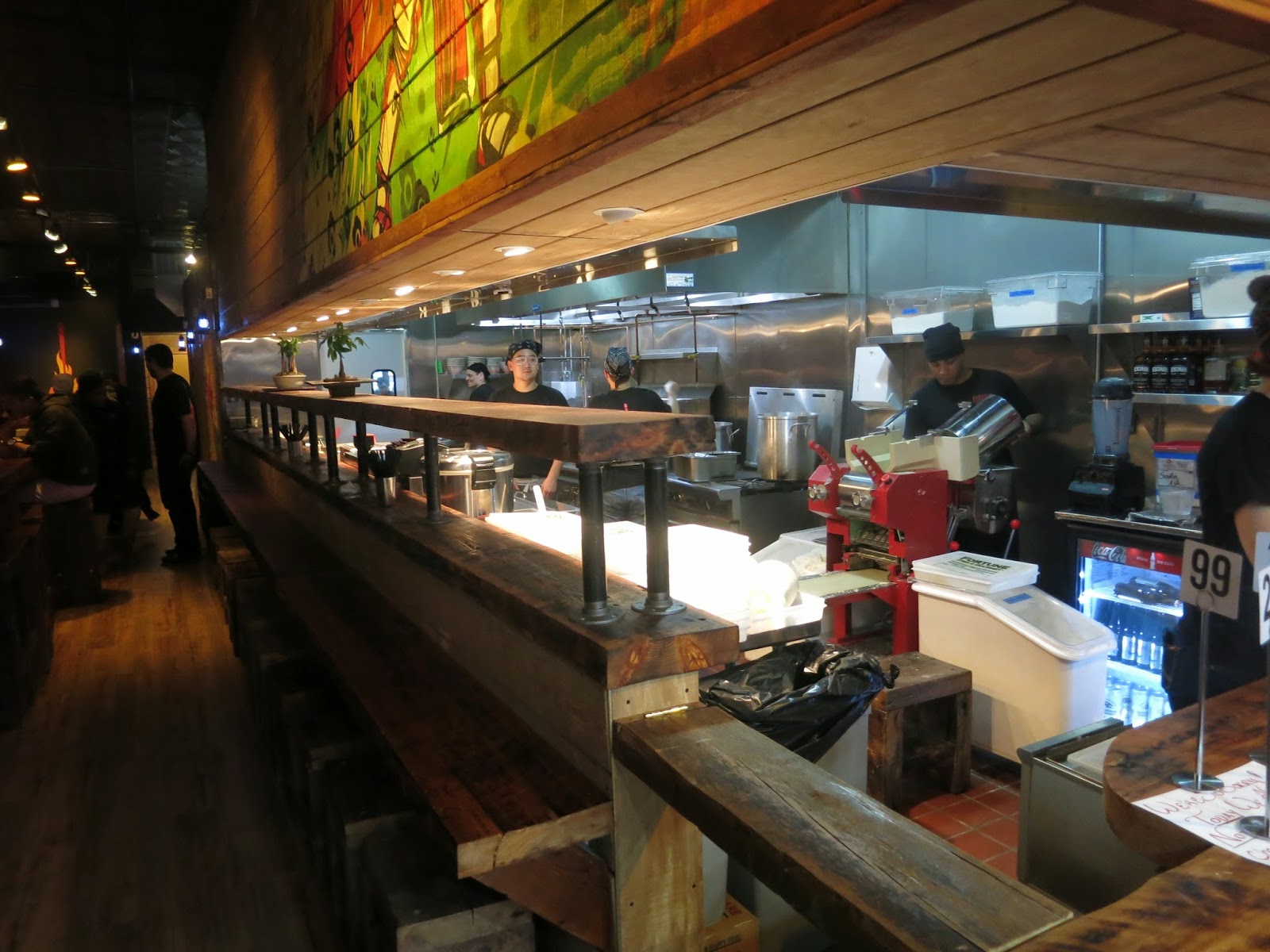 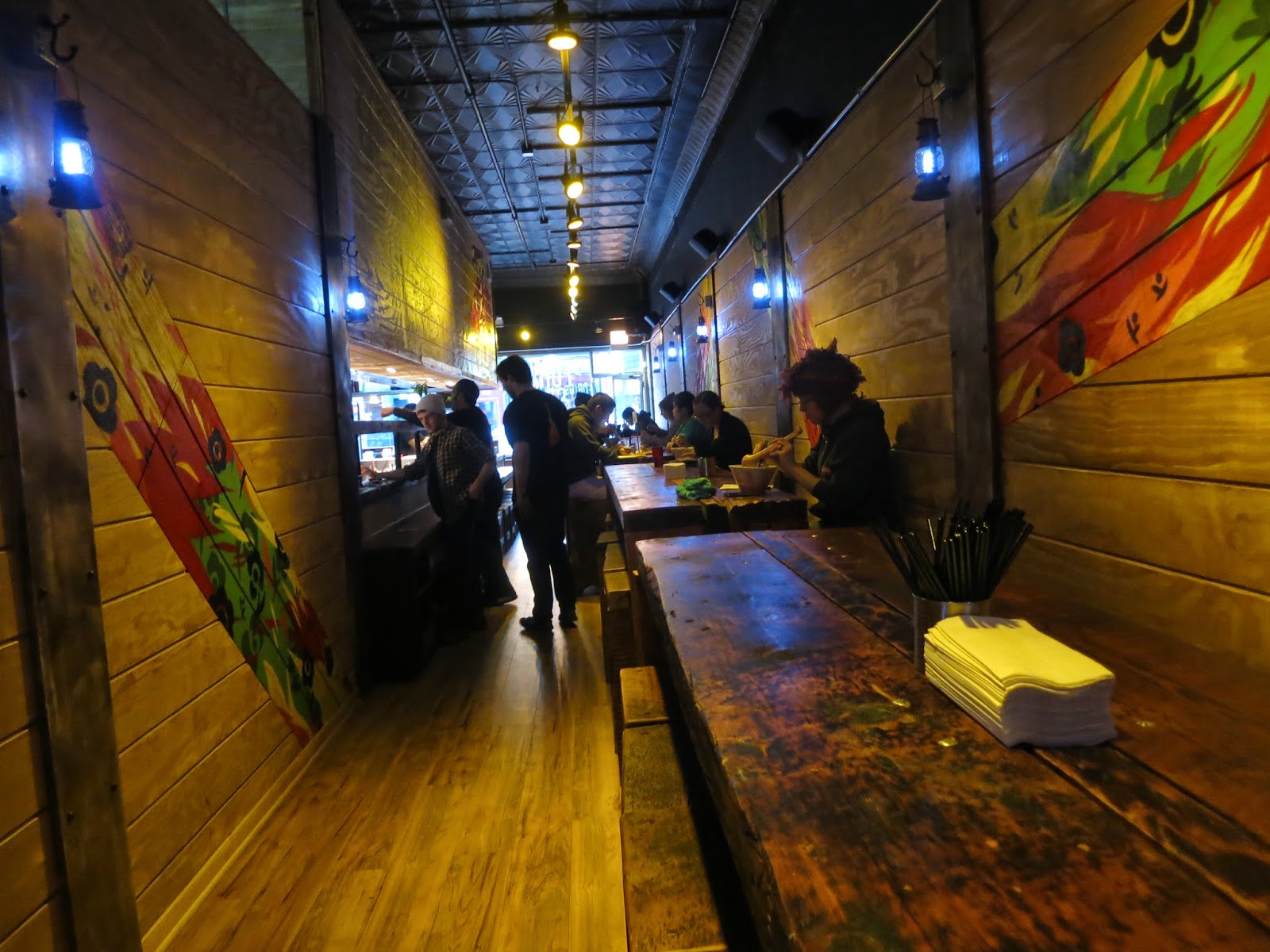 Orders come out quick upon seating, speaking of which really is an odd setup. I guess they're going for that authentic Tokyo feel by cramming the place with as many people as they can. The communal tables are up against a wall and if you're sitting on the wall side you can expect to get up a few times as someone else tries to sit down. Luckily for us they were just opening after a brief abrupt closure they had to do in order to make more noodles in the spiffy machine they have on display in the open air kitchen. So what about the product? Not bad! I really enjoyed it actually. I got the namesake ramen which consists of a spicy miso broth with beef brisket, char-siu, toroniku, poached egg, marinated mushrooms and a garlic relish. It was served piping hot and the broth had some deep notes of flavor. The pork was about as tender as I've ever had in a bowl. The beef brisket had a bit of fat clumping it together and I could of took it or left it as it didn't really hurt or help. As long as the line aint crazy I can see myself headed back at some point. As somebody who has been to Japan fourteen times since 2005, I feel reliable rating ramen shacks in Chicago. In November 2019, Furious Spoon ran a promotion in which if you filled up a bingo card [ramen, appetizers, drinks] before the end of the month, you were entitled to a free bowl of ramen for the entire month of December.
I completed my card. But in the succeeding month of December, I only had seven bowls of ramen here. Granted - there were a number of days when I did not go out anywhere to eat, but in Furious Spoon's instance, I felt the quality had slipped. I added the extra-cost options ("level up"), but if that was what the shack would prefer everybody have, why were not the bowls configured with those ingredients at the price point it desired? [e.g.: Similar to Italian Beef stands - If the peppers are a mandatory option, why not add them to the base sandwich and raise the selling price appropriately?] I was also non-plussed that the shack's payment routine dictates you having to pre-add the tip. I thought a "tip" was supposed to reward quality food and service, which I had not received yet.
In Japan, there is no tipping.
I feel its swift expansion hurt it. It could not maintain the quality across all its locales.
Note that the chain has contracted to two shacks: Milwaukee and Fullerton, and Belmont and Halsted. This original locale is listed as "temporarily closed".
Ramen is not a take-out entreé. Its flavor needs to be savored and consumed within seconds of its presentation.