I'm always on the prowl for that tavern style Midwest thin and it was about time I hit up Wells Brothers in Racine, WI to see what its all about. Its been on many, many "best of pizza in the US" lists and I finally got there a while back and now I finally get to share it with y'all. 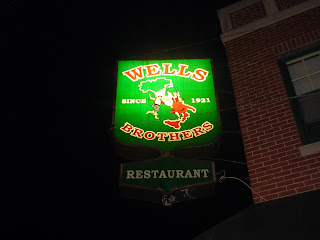 "Thanks again for the heads up. Its interesting that this does seem to be the signature pizza of the Lake Michigan region. Whenever I'm driving around Harbor Country and other areas in Michigan, Indiana and Wisconsin along and near the lake I see many old school Italian places that have been around since the '50's."-Reply on a message board along with a thanks for the tip on Wells Brothers in Racine, Wisconsin.

But for the record its not me who found it because they've been around since 1921. Anyplace serving tavern style thin since 1921 is going to get a visit from me, I don't care where it is. Like the middle of a bad part of town. Its nothing to be scared of just a place hit hard like so many other Midwestern towns. On my first trip to WB we strolled the hood and they were closed. They are open Tuesday through Saturday, 11 am - 8:45 pm and closed Sunday and Monday. So me and some friends headed back a few days later.The whole fact there was this old school pizza parlor that's been there since 1921 located in a not so great neighborhood made we want to try it even more than I already did. So we made the trek up Sheridan Rd and took 41 North to Wells Brothers which is just off the circle tour route. 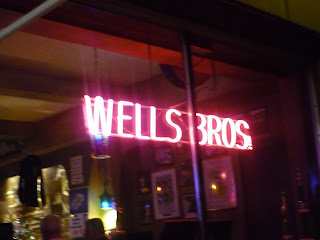 old school neon sign...this is always a good sign in my book

Upon entrance you immediately get the feel you would expect at one of these old school Midwest pizza taverns. You are first greeted by the bar upon entry. The night we went the bar was full with people watching basketball and eating pizza and having a beer. They had Spotted Cow on tap so that's another good sign in my book. Lighting was dim and the dining room was old school. The old wooden chairs at the tables with one of those painted murals of Italy on the wall along with a bunch of old school pictures and articles. Before I even had a sip of water I had fell in love with the place. The menu tells the restaurants history on the back of its menu. 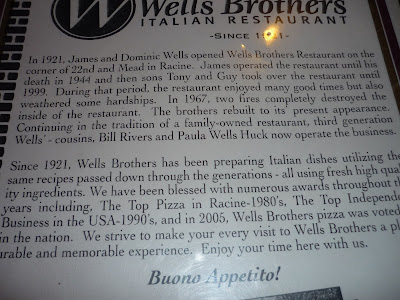 a little history lesson for ya...click pic to make bigger 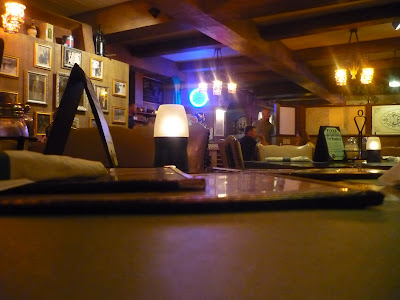 View from my seat...as you can see its old school in there

The people working were very nice and set us up with drinks and took our order within ten minutes despite a pretty packed house. I had explained that we came from Chicago to try this pie. Our waiter replied, "ya y'all got that real thick "za" way down there in Chicago huh?" Which I thought was funny b/c Chicago isn't really way down there, Racine might as well be a suburb since other spots like Schaumburg get included as them. I then explained that this tavern style is actually the real Chicago style where I'm from and also popular throughout the Midwest and he had no idea we have pizza spots like Wells Brothers in Chicagoland. So then the pizza came out within 15 minutes which I thought was pretty damn fast. So how was it you ask? 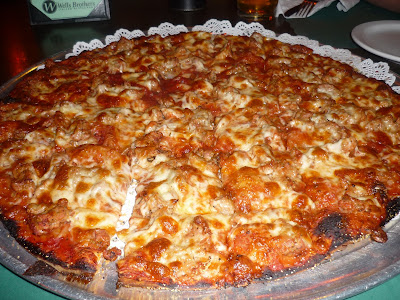 You just knew it was good when it arrived

I'm not going to sit here and try and come up with some fancy words to describe this pie. It was amazing. I repeat amazing. First thing you notice is the near blackened crust and the fact it is loaded with sausage unlike any other pizza spot I have ever seen. Upon picking up a piece you realize that the bottom crust is loaded with cornmeal. It may sound unappetizing but the bottom of the pie felt like sandpaper. Trust me when I say it was as appetizing a pizza pie as I have had. Excellent pizza with cornmeal at the bottom, crisp near-cracker like crust with slightly burnt edges, good sauce, good sausage - and lots of it. 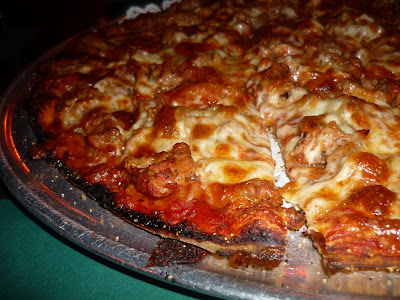 So how did this place stack up with my favorites? It was almost as crispy as a Zaffiro's pie, I might like the crispness factor at Wells a little better just because you can still fold a piece. The sausage was the 2nd best sausage on pie I have found. I still think Pat's is the best but this sausage was just like Pat's in that it was loaded with fennel. It was also the most sausage I ever got on a pie so that as I already said is a big plus. 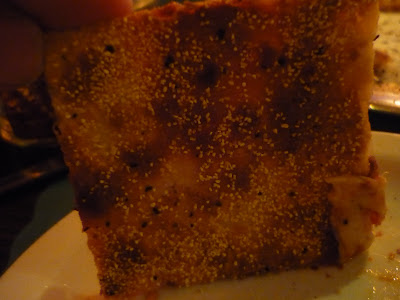 My buddy who's a pizza maker himself and lived in Rome for a few years mentioned that "I guess there's no such thing as too much cornmeal when making a pie" and I agree. It was alot like Q's and this is my style. It passed the crispness test of taking a piece from the middle and holding it up to see if it stayed straight. While the neighborhood has changed and the owners have come and gone at Well's, the pie remains the same. Don't be too scared off of the fact its in the hood. They have the whole place lighted outside and they always have a Racine County sheriff escorting older folks in and out and walking around the premises. Just be careful with your camera, a local thought I was FBI or something when I was taking pictures outside. When my camera flashed he took off running faster than Usain Bolt. If your a pizza aficionado, you haven't had them all until you get to Racine and try a tavern style thin crust from Well's Brother's. Going on almost ninety years. Cheer's to ninety more. I'm still a big fan of Zaffiro's but Well's took over as my favorite pie period. As of today anyways. I'm always on the prowl. If your a diehard roadfoodie like me or a bad pizza junkie, well then you need to go to Well's. I don't care where you live. 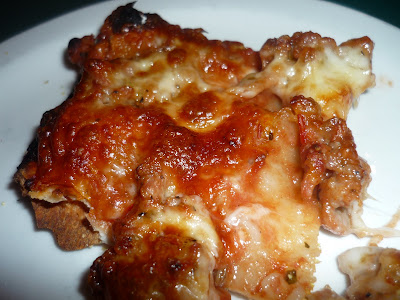 A piece of tavern style thin from Wells Brothers

man that looks good. might have to take a trip up to sconsin soon

you gotta love the cornmeal on the bottom. oh man.

Love your blog and I see you reside in Chi Town, oh its my favorite city : ) Have a great night!