Its been a longtime coming. Its not just pizza, hot dogs and beef when it comes to Chicago's signature food items. Also in the realm of discussion is the famous Maxwell Street Polish Sausage. Said to have been introduced to the people of Chicago in 1939 by Jim Stefanovich who took over his aunts street stand on Halsted and Maxwell street. Jim's Original as it was and is called eventually developed over time. Soon it would become well known when Mr. Sefanovich introduced the Polish Sausage to the city. From that day forward it became a legendary food stop in Chicago and a trip to the old Maxwell Street Market meant a Polish from Jim's. It still is a legend today. Despite being forced to move from its historic location by Mayor Daley and his UIC cronies (who I'm sure all profited greatly) Jim's Original and Express Grill are still going strong. 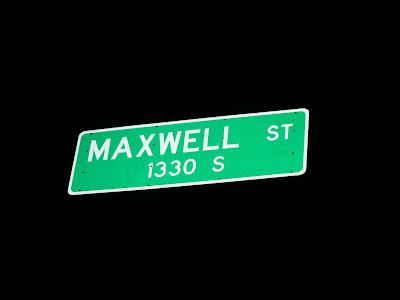 "Original Jim's is an icon of Chicago, housed in the same location it has always been, in the historic pre-Chicago-Fire building at the northwest corner of Halsted and Maxwell Street. Blues musicians such as Hound Dog Taylor and others would get their electricity from Original Jim's and play in the alley behind it. That hot dog stand is written about in songs, poetry, and novels and is in several movies. " From a press release circa 2001. When Jake and Elwood visit Maxwell Street in The Blues Brothers, there’s a quick shot of the grill at Jim’s.

"Steve Balkin, Vice President of the Maxwell Street Historic Preservation Coalition comments, "This is screw deal by UIC and Mayor Daley. I hope everyone who ever wants to get an authentic Maxwell Polish and can't -- I hope they remember Mayor Daley as the man who caused this culinary and cultural tragedy to occur."-From the same press release. It was on Monday July 30th 2001 that Jim's Original served what many though might be its last Polish. Well Mayor Daley as usual pissed off so many people that eventually a deal was made to move both Jim's Original and Express Grill a few blocks down. Sometime after Jim's Original opened a place called Express Grill opened right next door and served virtually the same menu. The two hot dog stands coexisted side by side for decades until they were relocated by the city a half block east to Union Avenue, adjacent to the Dan Ryan Expressway on-ramp at Roosevelt Road. On a nice summers day with a steady breeze you can smell the onions from the grill all the way onto the expressway. Even a blind man would know when hes getting close to Jim's and Express because when you do the smell just hits you. While they stay open 24 hours a day I have never been to either or while the sun was up or in a normal state of mind. This is where the vampires eat after a night of indulgence. 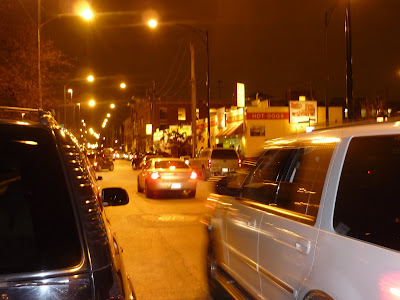 Just another night outside Jim's and Express on Union ave 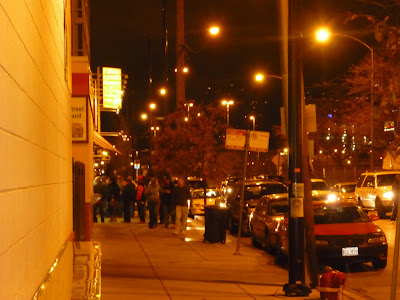 Line of people at Jim's on a weekday night around 1a 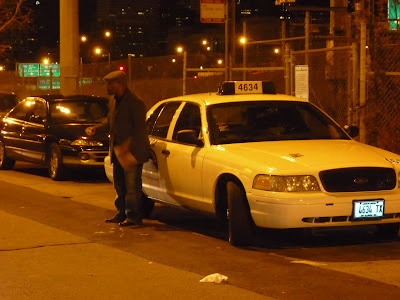 A cabbie enjoys what could be breakfast, lunch or dinner...I didn't ask

So when there's stands that are right next to each other and spitting images of one another, that serve duplicate menus at identical prices the question is always asked. What's better-Jim's Original or Express Grill? Its a test I'm sure many people have done in side by side tasting comparisons. In fact there's a post about it over on LTH you can check out by clicking HERE. Both spots are walk up only so be ready to eat on the hood of your car. I would recommend doing so no matter what month it is. Those onions have a potent smell and it can stay in your car for days. I always place the exact same order no matter which stand I'm at. That order is an all beef Polish with everything (grilled onions, mustard and sport peppers) and a pork chop sandwich with everything (mustard and onions with sport peppers on the side) and to go with them a can of RC cola. So lets take a look at both spots. Tell me which one you go to and why in the comments section.

The first thing that hits your nose is the wafting aroma of sweet onions in the air. The first thing you see while in line at Jim's is a banner that reads "We are not affiliated in any way with any other hot dog stand in the area" You see Jim's Maxwell Street Polish became such a household name that now there are Maxwell Street Stands throughout Chicagoland. Many of them are called Maxwell Street Express, some call themselves Maxwell Street Depot others call themselves Jim's Polish or whatever and they're all similar in style but not authenticity or even in quality. So here is a look at the stand that set the trend and has never looked back. 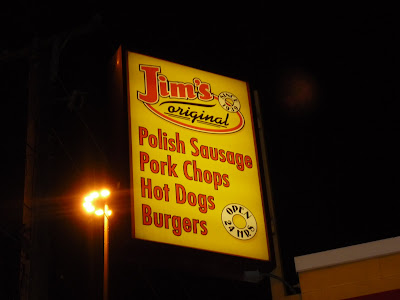 a Chicago staple and must stop for any roadfoodie 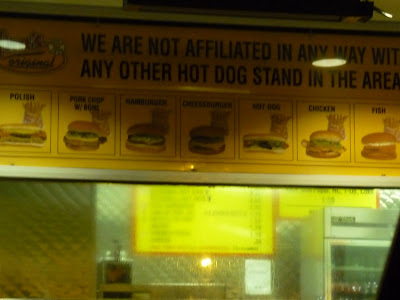 Jim's Original is on Union ave. off the expressway...nowhere else 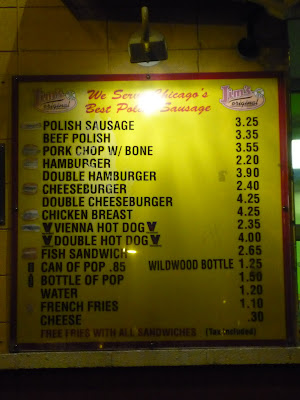 The current menu at Jim's

Just like always I get my all beef Polish and what might be my favorite Maxwell Street menu item, a pork chop sandwich. I would take a pass on the burgers unless your belligerently drunk and you need a burger. I've had them plenty of times and they are average if that. The same can be said for the fries-nothing great but they come with each sandwich so they get ate. Obviously the Polish's are the signature item but also very popular are the pork chop sammy's. I cant figure out which one I like better but I have never had one without the other. They go hand AND hand. Just be aware or don't forget that there is a bone in that pork chop sandwich. I wonder how many plastered people have lost or chipped a tooth or two because they were so hungry they chomped so hard? 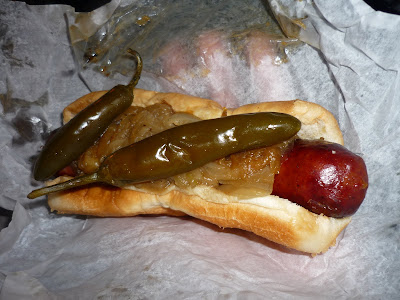 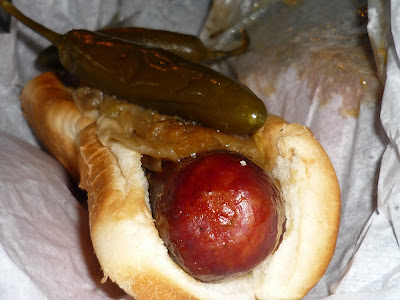 The Polish Sausage is as Chicago as Da Bears, Ditka and da skyline 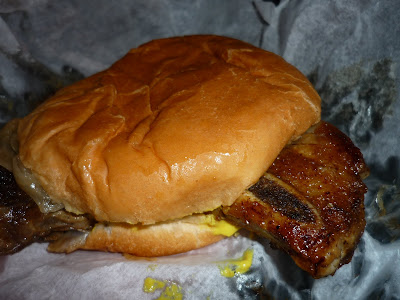 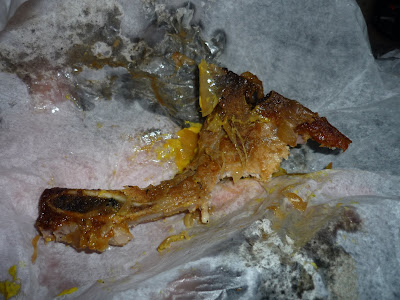 all that's left at the end of each order

Located just 1 minute down from Jim's is Express Grill. If your from Chicago then you would know that the debates are just as heated over Jim's/Express as they are over Cubs/Sox and that's no joke. It was during the 195o's when Tom Lazarevski quit working for his uncle Jim Stefanovic over at Jim's Original. He then opened up his own late-night Polish/hot dog spot right down the block from Jim's on Maxwell street. Well as fate would have it the UIC expansion plan would later put them side by side on Union ave. Since Express first opened they have battled Jim's for customers and have always had the same prices and pretty much the same menu. Its alleged that both places use their own recipes consisting of encased beef and different seasonings for their Polish Sausage. The Great Don Barzinini swears by Express and hes a veteran over there. Its much like Pat's and Geno's for cheesesteaks in Philly. 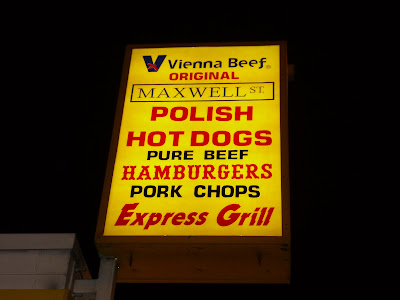 Right next Door to Jim's and also a must stop 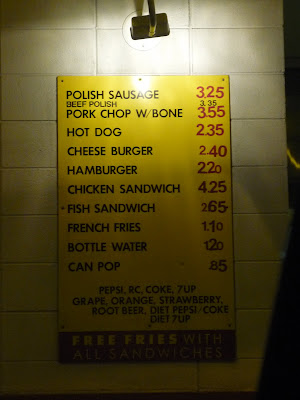 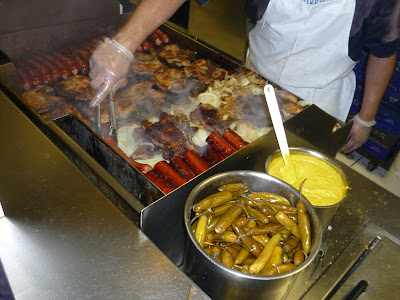 Grill at Express being tended to...buckets of sport peppers and mustard on the side 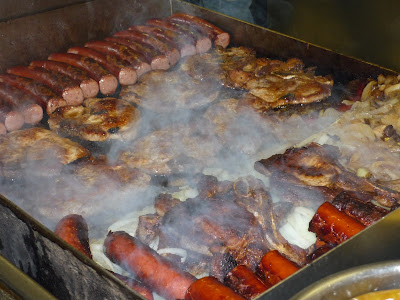 Close-Up of the grill at Express on another busy night 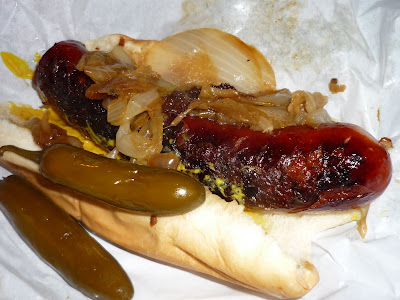 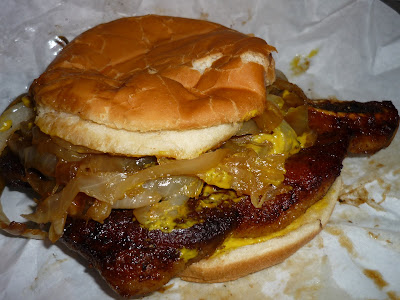 So which one is better? c'mon you didn't really expect me to remember any mental notes I might gather when eating at either one. Even if I could remember I'm pretty sure all that would have been said about both was Mmm followed by a Mmm then a Mmm. Kind of like in "What about Bob" when hes at the dinner table. That's all you really here around the area at night. Despite 100's of party goers and people out late its pretty quiet because everyone is eating. Your just going to have to head on over and do a side by side taste test for yourself. I'll put my money on either or. You might get a better one at Jim's the first time around and like Express better the second time. The important thing to know is that there is no other place like either of them in the city or the country and thus, the world. See ya next time on S'C&C wit Da King.

DAMN those look good.
Also their sport peppers look bigger than most.

I really wish I had found your blog BEFORE going to Chicago a few years ago, would have saved me from some mediocre food..

Damn those pork chop sandwiches are good. especially when eaten off the trunk of a sedan while in a three point stance.

Hello,
I just came across your blog and enjoyed it very much. I'm a banquet manager and write a blog about the daily aggravations that go with my job...from cranky chefs to nasty customers and everything in between. I hope you enjoy it. Please visit and leave a comment. Have a great day!
So You Want To Be a Banquet Manager

You're my #1 source for all things good to eat in Chicago. I hope it's alright with you that I'm linking to this post so that my readers know who I have to thank for telling me all about Jim's Original.

Your method of smoking sounds great! Kind of the indirect heat way of cooking. Thanks for sharing.....