The almighty Jibarito and its creator...

-Chicago's Other Famous Sandwich: The Jibarito

When you think of Chicago originals and staples in the food world thoughts of deep dish pizza, Italian Beef, Polish Sausage, Hot Dogs and Mexican food jump into the mind but there is so much more. The Italian Beef may be Chicago's signature sandwich but he has a running mate that can more than hold its own, the almighty Jibarito (pronounced hee-bur-itto). It was invented circa 1993 in Chicago's Humboldt Park neighborhood by the owner of a great Puerto Rican restaurant called Borinquen. 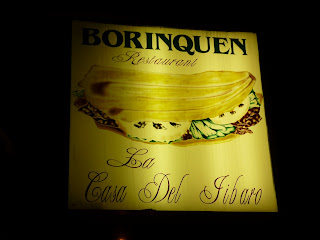 The city of Chicago has so many different cultures that make up the city and the Puerto Rican's play a major part in that role. Just like Chicago is home to the most Mexicans east of L.A its also home to the most Puerto Rican's west of NYC. They started coming into the city during the 1940's and by the 1960's most of Chicago's Puerto Rican's were concentrated in Lincoln Park and they had established a long row of small, ethnic enclave along Armitage ave that included small grocery stores and businesses providing goods and services for Puerto Rican neighbors. By the 1980's Lincoln Parks redevelopment pushed most of the people into the Humboldt Park neighborhood where most still reside today. 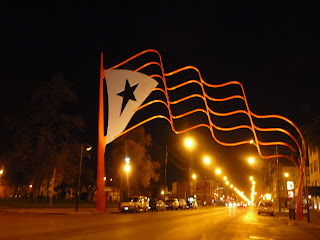 Today Chicago is home to a wide array of Puerto Rican places to eat and all of them serve Jibarito's but only one of them invented it. The owner of Borinquen was fooling around one day when he decided to create a sandwich based off the plaintain sandwich from his native country. Peter took two plantains and flattened them and proceeded to twice fry them and that would be used as the bread. He then decided to add steak cooked in butter, cheese, lettuce, tomato's, mayo, sauteed onions and then brush the plantain with a garlic butter spread. The creation was the almighty Jibarito and it has since made its way back to the island. It truly is one of the best sandwiches in the world and there are many different places to get them but Borinquen is the creator and maybe the most consistent around town and when paired with their amazing yellow rice its a treat that you have to try while in Chicago to know just how good they are. 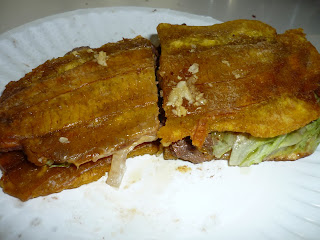 The Chicago specialty sandwich from above 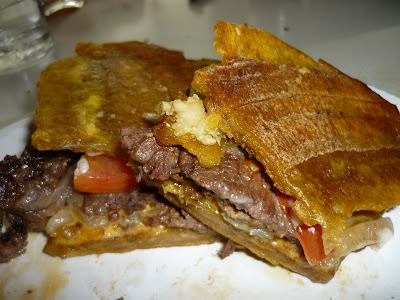 be careful these bad boys pack quite a punch...to the heart

Those of us lucky enough to live in Chicago sometimes forget just how lucky we are. In a recent review of the newly opened Meatloaf Bakery on the serious eats site it was asked if Chicago was closing in on other great food cities of North America like New York, San Francisco and Montreal because "one factor against our pre-eminence as a serious food town was our lack of fringe specialty food shops." Its not a false statement that we may indeed lack specialty food shops like the meatloaf Bakery, where they make meatloaf cupcakes with mashed potato "icing" and use only the freshest and best ingredients to make quite a few variety's of meatloaf. But do we really need them?

The answer is yes and no. It would be nice to be able to get real pomme frites from a specialty shop and stuff of that nature but we don't need a chicken wing place that specializes in chicken wings made from famous chicken dishes created centuries ago for royalty. I don't need Chicken wings ala Divan or Chicken Wings Marengo. Now find me a city anywhere in the world that has the selection of original foods like the roadfood staples we have all the way up to the high end dining with stops of every cuisine in between? sure we don't have the deli's and specialty food shops of NYC and they don't have the authentic Mexican and real fast food joints like we do. We already are one of the premiere dining destinations. If you could get the real McCoy of everything in one location on the map, what would the fun in traveling be?

nice entry. i really enjoyed your take on "specialty shops" vs. roadfood. i agree that the preponderance of real-cooking based fast food joints is one of the things that makes chicago a great eating town.

even the worst hot dog/burger/gyros/beef type joint in chicago is better than 99% of the fast food outlets that are the *only* option for a quick lunch or latenight mow-down almost everywhere else in the country.

good posting titus. i love how you wove in the history of the puerto rican experience in chicago, very informative.