Lawrence's fisheries is one of Chicago's most notable places to eat when it comes to seafood. It sits on the river and was purchased by Lawrence Schweig in 1950 where he sold fresh fish brought in by his boat along with fried shrimp, fish chips, fried chicken and an assortment of smoked fish. The commercial fishing stopped in the 60's and along with it so did the wholesale smoked fish operation. In 1973, Lawrence's celebrated the grand opening of their current structure and its been all in the family since. 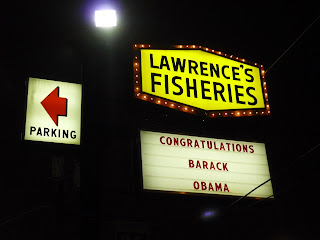 Lawrence's on canal st. and the river 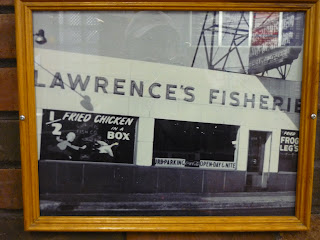 Back in the day

Lawrence's is one of Chicago's best 24 hour options and its always good if your craving fried seafood from a Chicago style shrimp shack but this place is by no means a shack, tables after tables to eat at both inside and out make it the largest fried shrimp joint I've ever seen. They have all of your typical fried seafood including but not limited too scallops, fish nuggets, fish sandwich, oysters and clam strips. I don't make it to Lawrence's too often for whatever reason but whenever I do I am always pleased with my meal. Lawrence's is open 24/7 364 days a year and during that year span they always have 6-8 deep fryers going at once and a constant flow of traffic. Diners order everything off the menu with the fried shrimp, seasoned the same way since the 70's being the main draw. Other popular menu items in the winter are the jambalaya with shrimp and sausage and chicken gumbo. I would say that both are pretty good and well worth the $1.99 price tag along with some fried shrimp late nite. 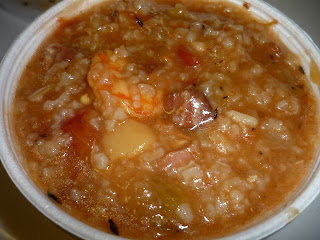 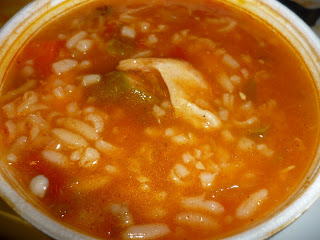 When you go to a Chicago shrimp shack a side of homemade hot sauce is what comes with your shrimp not cocktail sauce. Most places will offer hot and mild which is more like half hot sauce and half cocktail sauce or something to that degree. Lawrence's has a tasty sauce with a little ting and goes thru so much of the stuff that they had to start packaging it in little containers to keep up with the demand. It doesn't matter what item on the menu people ordered you will be hooked up good with the hot sauce. 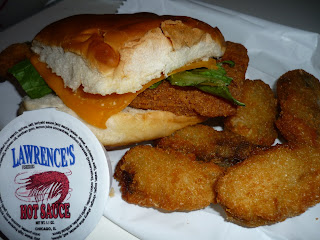 Fish Sandwich and fried oysters with a hot sauce 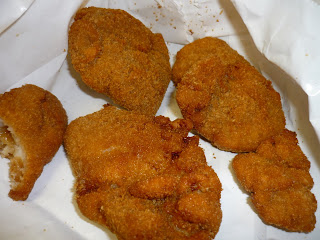 The fried shrimp at Lawrence's is pre breaded with their special breding due to the turnover rate and amount of people coming thru. I don't care for the thicker breading that some Chicago shrimp shacks use but its still some good fried shrimp and the seasoning and hot sauce make up for the thicker breading. Its also the best place to get fried seafood late nite and a nice change of pace option down the block from Chinatown which also has a few late nite spots of its own. 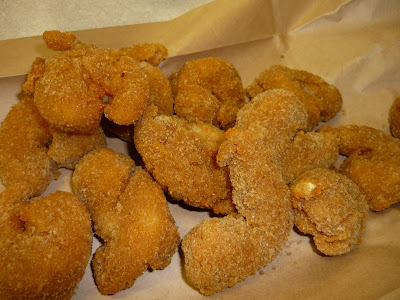 those fried shrimp look unbelievable. thanks for the tips and the great pictures.

fish chips and fried shrimps. YUMMY! plus a cold bottle of beer. perfect!