What's the beef is located on Clybourn ave in Lincoln Park. It is the best options for a beef in LP...but thats not saying much. In fact in some bogus claim by Chicago magazine, "what's the beef" was named the best beef in the city in a 2007 article. Ya and Chicago Magazine is the best dining guide in Chicago. They even went so far as to make the following moronic statement "Demon Dog's is gone and residents of L.P could care less, they have What's the beef's juicy homemade beef..." ok lets get one thing straight, I dont know where the hell the writer of that comment is from and what big 10 school he/she went to but DD's and WTB are not to be spoken of on the same level again. Got it? Good. 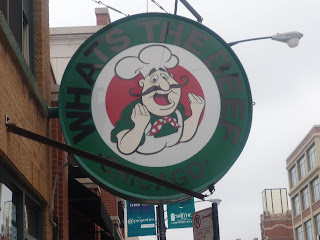 Im not here to trash WTB, in fact I hadnt had a IB from here since it first opened at least 8-10 years ago, so one day recently I decided it was time to try it again and document it for the beefies that follow my site. They do make their beef homemade and this means it is worth a try in my book. So the beef was sliced thin and had a good tender texture, meaning it wasn't sitting in the gravy all day. The bread was good and the gravy was just ok, makes me wonder if that is homemade, not to say it isnt, but it tasted like it came from a carton. The main problem for WTB was and is a major problem in the decision of what makes a good beef and that is their hot peppers, they are absolutely horrible and similar to the slop served at Novi's.

With all of that said, in an area where a good IB is rare, WTB can get the job done for some, its not bad. The fries are homemade and fresh fried which is a big plus and many other items on the menu are popular there. WTB is approaching a decade as a independent owned restaurant in the LP area so you gotta salute them for that. Most of the menu items are homemade and they have regulars so thats always a great sign. 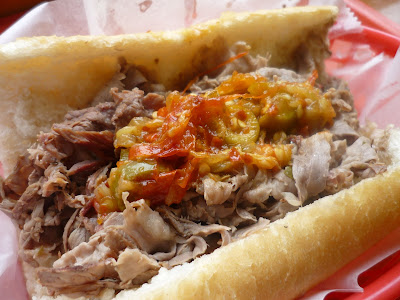 beef with hot from WTB

Wtb has great italiean beef, great chicago style hot dogs, and huge mouthwatering burgers! An A+++ defienetly worth a try!
PS the outdoor seeting and garden is really something special!