AL's is a Chicago original, anyone born and raised in Chicago has to have been to AL's at least once in their lifetime...if not you should have your Chicago birth-rights taken away. AL's has a cult following and is loved 'til death by its fans. AL's #1 sits on Taylor St, one of Chicago's best streets to take a stroll down. In the taylor st. area there are a number of beef stands but AL's is by far the most attended and well known, both in the city and around the world. 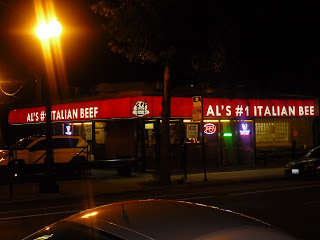 AL's #1 IB has quite a diverse loyal following

AL's is the most unique in a good way of all the beef stands in the city. First off the beef is basically shredded as opposed to sliced paper thin and is very tender with little scraps of pieces. Whether or not you prefer it this way or sliced thin its hard to argue either is bad. The gravy has a flavor all its own and is a red color loaded with spices with a heavy fennel kick, it cant be duplicated, its a very unique flavor. The giardinara is also homemade and cut into very small pieces and is heavily coated in oil and has decent kick. Extra kudos to AL's for allowing the choice of a big beef which is 50% bigger than a normal sandwich. As far as the bread goes, with the rate of traffic of every type of person imaginable, the bread is always fresh.

Wanna make it a complete meal? get a beef with some their twice fried fries and a Italian Ice from Mario's across the street, thats about as Chicago as you can eat. Sure its a love/hate thing with AL's, with it being loved much more than hated. This is by far the most recognizable IB in the city, once you had a beef with hot from AL's you could easily identify it in a blind taste test for the better in this case. The Taylor St. area is Chicago's Little Italy and I would recommend AL's as the best place for a beef closest to downtown. I DO NOT recommend any other of the AL's other than the location on Taylor st, it is franchised and the beef can differ greatly at locations, so stick with the original. Anybody coming in from out of town can get over to the neighborhood in a quick cab ride and they will be greatly rewarded for not slouching on their taste buds.

Its nice to know that AL's will be here for the next 100 years and never fail me once during that time. Boy I could use a beef with hot from AL and a peach ice from Mario and for it to be mid August all over again with Soriano and Ramirez swinging hot bats. Its a cold-cold day in Chicago. More on this later in the week with a promise of something to help warm the chill and sting of this years team that is sure to last deep into the winter. Sox fans your day is coming...remember to wear black to your funeral later today. 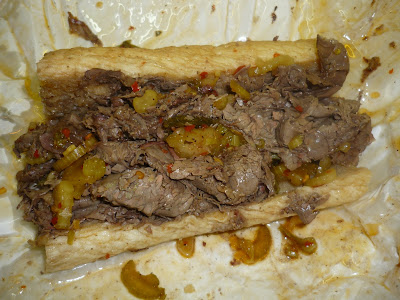 You MUST get it with the buffalo fries... I order Al's every saturday morning (i.e. - 3pm) as my hangover cure. Good call in the big beef... cut it in half and save it for later. The buffalo fries are a preposterously delicious. The King needs to go back and try them out...