Months before the pandemic me and a friend rode out to Evanston for some Indo-Chinese. The fusion of Indian and Chinese flavors is a magical one and is very popular in spots like Toronto and Bangkok on top of all the major cities in India. But despite a large Indian community in the Chicagoland area there isn't a ton of Indo-Chinese spots. There's maybe a handful and a few more that sell Indo-Chinese dishes but RHCP boasts a large Indo-Chinese menu and pre-pandemic seemed to be a popular stop for Indian families in the area. They even have a bar and lots of space for groups. 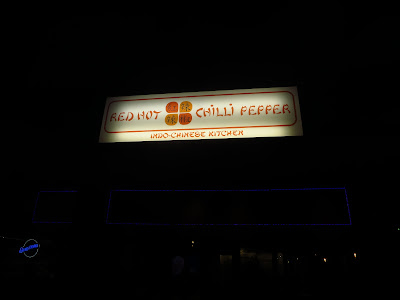 Locals favorite in Evanston
Indian-Chinese cuisine is said to be traced back to the ethnic Chinese community of Kolkata. Like all groups of Chinese nomads they brought with them their recipes and adapted to the local ingredients and such. There's many of Chinese fusion cuisines and Indo-Chinese is one of the most exciting. RHCP offers a solid menu with many of the favorites as far as Indo-Chinese dishes go. While I haven't had the chance to check out a ton of Desi-Chinese spots I always like to try the Hakka Noodles when doing so. It's a simple dish that relies on the wok skill of the cook to determine just how good it can get. The version served here is my favorite from anywhere thus far. They're just cooked really well to the point where you yourself might wonder what makes this bowl of noodles so pleasing. So much so I've been itching for an order for what's been almost my entire time in quarantine. RHCP closed it's doors when the covid cases started rising and just reopened for takeout not too long ago. 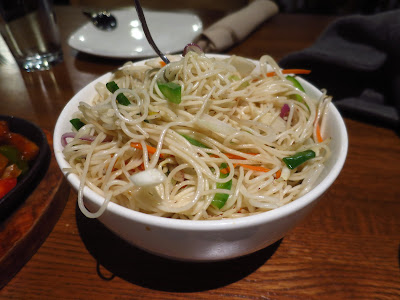 Hakka Noodles at Red Hot Chilli Pepper
Indo-Chinese features a ton of stir fried dishes mixing the spices popular in each cuisines together. Personally I find spots that do good stir fried foods always tend to do the fish dishes well so we tried an order of dry chili fish from the appetizers menu. It hit all the notes you want in terms of bold flavors. It was a busy weekend night when we visited so our food took a while to come out and they brought us some lollipop wings to enjoy while we waited for the fish. Those are always pretty good. 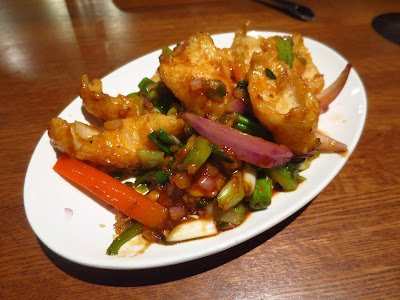 Chili Fish at RHCP
For an entrée we had to try the chili chicken the first go around. It's maybe the most popular Indo-Chinese dish though it's rarely made the same way at any two spots. RHCP does up a wetter version than I was hoping for and bc we got  chili fish too this the meal might've seemed a bit repetitive but between the two of us we scarfed it all down. It came served on a sizzling platter which I always get a kick out of. You know how everyone turns their head when you get your fajita platter at the restaurant wishing they had what you had. I also like how the pieces of chicken get crisper as time passes. 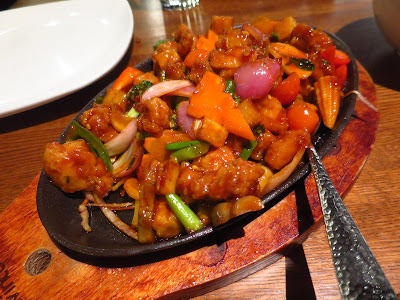