Today's stop should've gone up a while back. I stalled on it's posting in hopes to include it in a sandwich special that I've since vacated. Partly so bc Tacos Puebla in Addison (near O'Hare) is a gem of a spot. I always say there's no such thing as a hidden gem anymore but this might be as close to one as it gets. Located in a small shopping center on a not so busy street means you kind of have to know about the place bc the odds of just driving by are slim to none if you're not from the area. 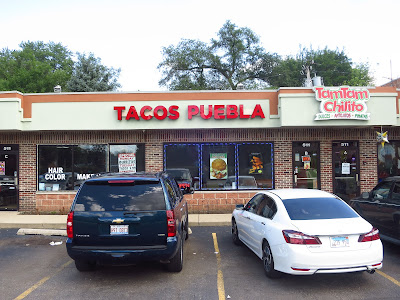 I probably found this place browsing through Yelp or Google and I reckon the name caught my eye. The town of Puebla is located about 2.5 hours southeast of Mexico City and it's long been the home to one of Mexico's best regional cuisines. Over the last 5 years more and more spots have opened that are serving the food from this region. Usually cemitas will be front and center. I figured that tacos arabes would be on the menu too due to the name. Puebla is where the famous tacos arabes were born. It's the original al pastor and a dish that the Lebanese that came to Mexico adapted to local flavors with shawarma being the biggest influence. They basically just switched from chicken and beef to pork and served sliced pork from the spit in a hybrid wrap mimicking both pitas and tortillas. You kind of have to go to Mexico to get the real thing (spits of meat up and running) but some spots such as Tacos Puebla will serve what's sort of become the American adaptation. Anyone that enjoyed the Tacos Arabes from Cemitas Puebla (RIP) will enjoy the version served here. It's similar down to the addictive smoky and spicy chipotle salsa that comes served with it. Served on a toasted flour tortilla. 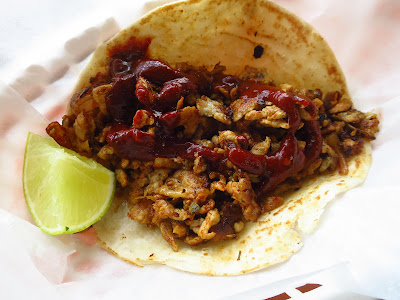 Taco Arabe at Tacos Puebla
The real star of the show at Tacos Puebla is their perfectly constructed Cemita sandwiches. The specialty sandwich from Puebla has two distinct characteristics. The first of which is the bread of the same name. Egg rich buns turn crunchy and come studded with sesame seeds as is the case here. Pictured below is the Cemita Poblanito which comes with chicken milanesa, enchilada pork loin, head cheese, hot dogs, Queso Oaxaca, grilled onion, avocado, chipotle peppers, and the other key ingredient - Papalo. A common herb in Pueblan cooking that has maintained popularity even after the Chinese introduced cilantro. This sandwich definitely has alot going on so I took off the hot dog and ate it solo. Actually it made for a great palate cleanser dipped into an array of homemade salsas from a free for all salsa bar (pre-corona) - just another reason this spot is a top shelf taqueria so to say. 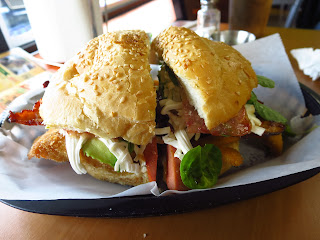 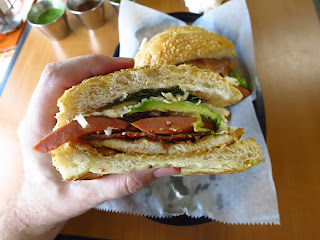