The year is ending a bit early at S'C'&C. 2017 was the best eating year of my life and yes I pretty much do say that every year. Though I cant imagine topping this past calendar year which isn't even over as I'm headed to Asia later in the week. That said as always my year end best of list consists only of spots that have been featured on here during the duration of 2017. Also important to note that I try to only choose one item (and maybe a meal) from each trip taken. So while I always eat a ton of good stuff on the road I try to pick the one thing I've thought about most since taking that trip. As always burgers, sandwiches, and tacos (my three major food groups) get their own sections. Those are followed by the best meals of the year which are pretty self explanatory. Ready? Lets roll.

Dry Chili Fish Filet at New China Station - Plain and simple this is probably my most ordered dish of the year. Partly bc of convenience but I never get food that I dont really want.

Texas Chili Mac at The Texican - Once a dish I had to make when craving can now be easily picked up for lunch. And this chili mac living fiend approves of their recipe.

Thai Egg Creme Soda at Spinning J - This must be the first time a drink has been featured on the best of list and it's fitting bc I cant get enough of this place and always get an egg creme with my order.

Yukon Fries at Roister - Leave it to Super Chef Grant Achatz and team to create the most umami-fied fries that I can ever remember.

Stracci at Daisies - I still think about the creamy flavors of both the lamb and the pasta in what was probably my favorite pasta dish of the year. Been thinking about it since the winter came.

Hot Tamales at The Delta - One of my favorite regional eats now available regularly in Chicago. A f-ing joy if you ask me.

Beef Empanadas at ArePA George - Meet my new favorite empanada in the city. The fact this place fry's to order is a big bonus.

Beef Shawarma at Roxy Kabab - One of my low key great discoveries of the past calendar year. I'm picky as hell with my spit roasted meat and this was super legit on the night we visited.

Pizza al Taglio at Bonci - I was skeptical due to the fact it was a chain type place making the move to America but after trying it out (too many times to count) it's the best restaurant import in the city.

Cevapi at Balkan Grill Company - I never knew how much I loved Eastern European until driving out to Gary, Indiana to try this Serbian food trailer. Well worth the ride.

Korean Wings at Sol's on Sheridan - Usually Korean wings are breaded which is fine but the battered version from here was some of the best fried chicken of the year. 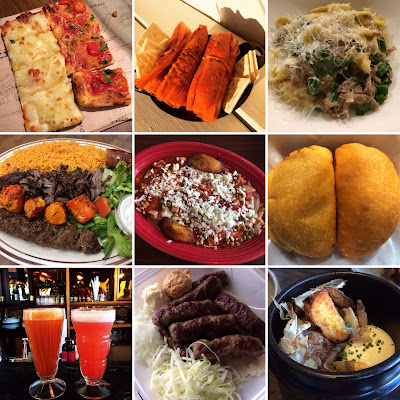 
Best of Beyond Chicagoland

See ya next year! Follow me along in Asia on Instagram @chibbqking
Posted by KingT at 8:18 PM

Thank you for your post. This is excellent information. It is amazing and wonderful to visit your site.
food safety alerts services
food product recall alerts