If you missed last weeks issue of the Chicago Reader you should make an attempt to check it out. The cover story is on immigrants and food and my guy Mike Sula found what looks to be like yet another gem. I've said this before and I'll say it again America without immigrants is a pretty boring place. Nowhere does that statement hold truer than when it comes to food. The food options in our cities metropolises are unmatched when it comes to international flavor. So today I wanted to tag along with the folks at Reader and feature a fantastic immigrant owned place we recently ate at. 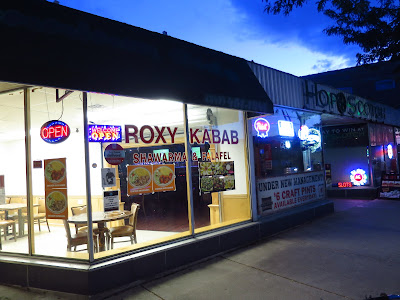 Typically when one thinks of great Middle Eastern food in Chicago the city's Southwest Suburbs come to mind. For instance Bridgeview is a hot spot for Middle Eastern grub. However something I noticed of late in Franklin Park and a few other towns around O'Hare is a boom in the opening of Middle Eastern spots. There's a few I'm looking to check out but Roxy Kabab was the first one due to a handful of glowing reviews. I dont care what Bourdain and Zimmerman say I still think Yelp is the best tool for finding little mom and pop spots. This place might not have 500 reviews but the 7 or so that were on there were enthusiastic about it's quality. There's also mentions of this place being Syrian owned. I had wanted to ask but the guys were hanging out at the bar after serving us. 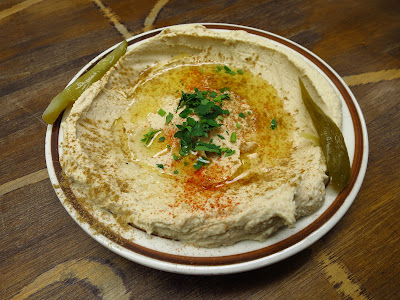 Plate of Hummus (free with $20 purchase)

Roxy Kabab is connected to a local watering hole. Both the bar and the restaurant are pretty bare bones. For those that have dined at Athenian Room and or Glascott's it's a similar setup. The guy taking our order was nice enough to point out that bc we spent $20 on both a mixed grill plate as well as a shawarma combo we were welcome to free hummus or falafel. The hummus was really smooth and while I cant claim to be an expert in this dish I will say it really hit the spot. It was seasoned well. 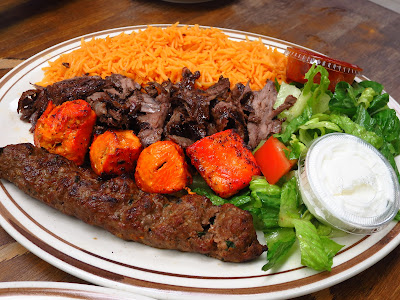 The mixed grill plate consisted of a beef kebab as well as chicken and some beef shawarma. I didn't realize that we ordered beef shawarma twice but neither of us were complaining as this was the best damn beef shawarma I've ever come across. Anywhere. It's not like I've been to the Middle East but I've ate my way around Dearborn, MI and never came across beef shawarma so perfect. Usually it's slightly chewy and somewhat off in taste but this stuff was as fresh as it gets and also seasoned to perfection. Everything else was pretty good but that beef shawarma is what I'll be back for. 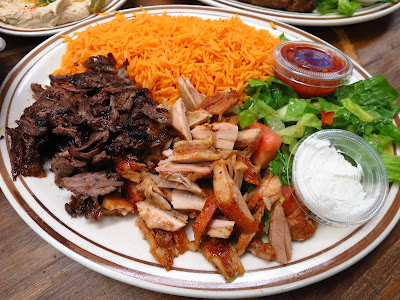 We had carryout from Roxy last night, It exceeded our expectations. We had the mixed grill with a side of falafel. My wife and had a universal disdain for all things shawarma. No longer. The beef shwarma was superb, the rice delicately flavored, and the house salad great.The kufta kabab was, also, very good. This is a great addition to the near west burbs lineup.