I first fell in love with Pelmeni while off at college in Madison. Around my junior year this little dumpling shack opened on State St. right near where I lived. Me and my then roommate befriended the owner and the rest is history, it was (and still is) one of my favorite bites of all time. Ever since I left Madison I've found myself wishing we had a pelmeni spot here in Chicago, and now we do. 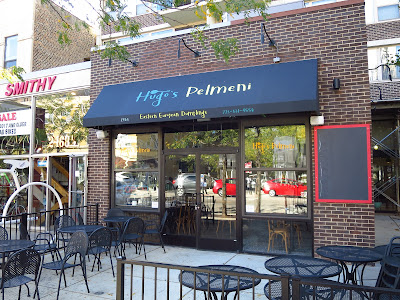 Due to my love for pelmeni I made it a point to go check this place out not long after it opened. It's on Clark in Lincoln Park adding to that strips international flair. The first question I had to ask was is Hugo's inspired by Paul's in Madison in any way? The answer was no. These guys are from the Ukraine and they said this is what they eat. Pelmeni are little dumplings the size of a quarter and they typically come filled with beef and potato. Hugo's offers their pelmeni in a variety of ways. In back below is the traditional style which comes with two homemade dipping sauces of your choice. In front is the "momo" version which is pretty much the same thing as Paul's (curry powder, vinegar, hot sauce, cilantro, sour cream). Maybe they dont know Paul's but there's other spots across the country that have mimicked them and maybe Hugo's knew of theirs. Either way I was pretty damn satisfied with the product though I will say that Steve Dolinsky commented on an insta post I made from here and said it was awful. Maybe they're working out kinks or maybe Pelmeni isn't for all. You decide. 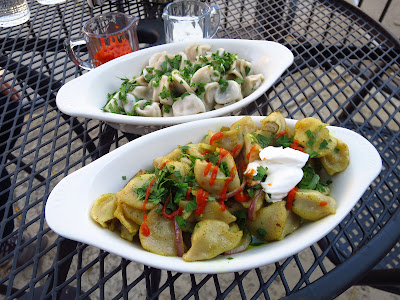