Tex-Mex is one of those cuisines that people either love or hate. Nothing but love from me. Despite not traveling to Texas until I met my now wife I've always felt connected to the cuisine. Texas author Robb Walsh is one of my favorite food writers and his book titled 'The Tex-Mex Cookbook' is one of my favorite cookbooks. Up until recently that book was just about the only source of Tex-Mex food in Chicago for me. If I wanted Tex-Mex I had to make it myself. Sorry but Uncle Julio's is trash and frequented by people who grew up going to Chili's with the family. It's bastardized Tex-Mex. 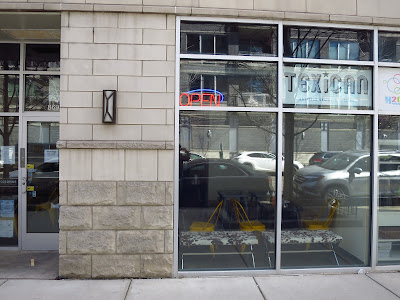 Newly opened in the Near North Neighborhood

Enter the Texican. Recently open on a stretch of Larabee that's pretty much entirely new it kind of blends in with the building it sits in. Inside is small and bare but I dont care because tasty Tex-Mex can be found there. These days Tex-Mex is being better received by food snobs as breakfast tacos have recently jumped into the spotlight. Breakfast tacos are a Tex-Mex staple and Texican has "Austin Style" (whatever that means) breakfast tacos on their menu. While there's only two options both are pretty tasty. Starting with the migas this is basically the official taco of Texas. It's eggs mixed with sauteed veggies (onion / bell pepper) and crispy strips of tortilla. Texican does a good job with this simple recipe that most breakfast taco stands in Texas are judged by. Also good is the chorizo and potato with eggs. Salsa comes in hot (red) and mild (green) and both of them are pretty good with the hot giving off good heat. Flour tortillas are store bought but I can live with that. Tacos are $3 each. 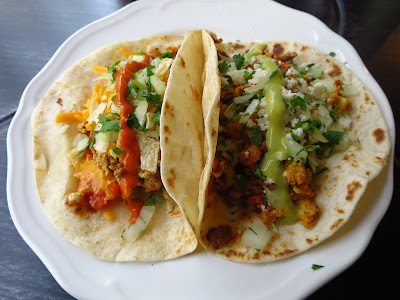 Next up on the menu for me was the enchiladas. This is imo the best dish on offer when it comes to the cuisine. It's the one dish that I think Tex-Mex does a better job at than Mexican cuisine. Well these are now the best enchiladas in Chicago by default. Cheddar cheese is wrapped into a tortilla which is dipped in 'Salsa Colorado' they might not be as good as my favorite stops in Austin but they certainly remind me of them. Some people just wont like these but if you like Tex-Mex you'll enjoy. 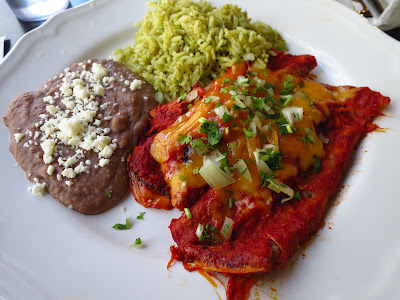 Another item that caught my eye is their Chili Mac. I make this pretty often, although I do something I kind of created called Taco-Mac though the dishes are similar. Here they take their Texas chili and mix it into macaroni and cheese. Throw on some onion and cilantro and you got a big plate of hearty food. The type of dish that the word comfort was made for. I will no doubt be back for this when the taste comes calling and I dont have the time or energy to make my own. It's good to finally have an option when it comes to Tex-Mex food. The menu might be small but the food is pretty damn good. 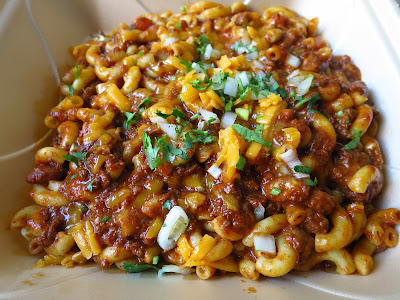