The Great Uncle of Beef

News from chibbqking: Introducing "Whats your beef?" a sister site to this one except its all beef all the time over there. While you will still be able to read all the upcoming beef stand reviews on this site they will appear on WYB first. Spread the word to any beef fans.

Welcome back beefies, off to da south side we go for stop number twelve on the Chicago beef tour. Over on 35th st. in Bridgeport is Uncle Johnny's grocery & deli, the definition of a ma & pa grocery shop. My man Johnny does a grocery business with a fully stacked deli meat case including homemade Italian sausage as well as hot sandwiches like beef, sausage, meatball and cold cuts, also available are all your pasta needs as well as drinks and a few toiletries. 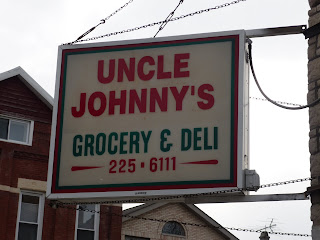 I rarely make it to the stomping grounds of Cell Block #9 but a few times a year and that's when the real fans of the Northside invade Comiskey and piss off Ozzie that his team has an away game at home and then there's those times when I'm doing some real eating. Chicago is referred to as the world's largest neighborhood due to the fact its a bunch of different vibrant neighborhoods in what also happens to be one the largest city's in the world as far as square miles. The Bridgeport neighborhood is home to the White Sox and quite a few long time neighborhood taverns and independent food spots and a few hot headed locals that have all been there more than a few decades. Its this type of stuff that makes Bridgeport one of Chicago's most notable and for that matter real neighborhoods. Its at Uncle Johnny's Grocery where you can find my favorite beef in the area. 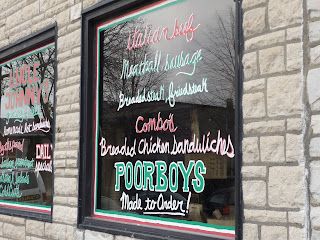 The Whole menu is great at Johnny's

I just happened to find Johnny's randomly one day a few summers ago and have been back quite a few times since. This Italian beef reminds me of a few spots that are long gone from Taylor St. It really fits the mold of an old school beef. Its an old family beef recipe that they serve in both six and foot long options and is served on a homemade bread from a local bakery that isn't Gonnella which it gives it its own character. I think the beef is above average and the gravy is better than good while the unique bread reminds me of different beefs from my youth. My only real beef with Johnny's is that they use the local canned giardinara they sell in store on the beef but thats not really a big deal because its not bad at all, I just like when the peppers are made in house. On top of the fact they do one of the south sides better Italian beef sandwiches its also one of the best deals on a beef in the city. 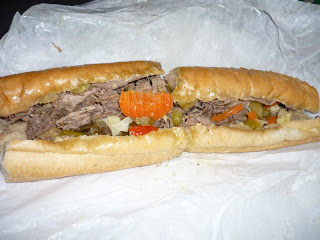 a large from Uncle Johnny's is how it should be

Over at Uncle Johnny's you pay the same price you would at most other spots around town for double the beef and you cant beat that. He takes care of you like that uncle of yours always did around family parties when he slipped you $20 in cash for grabbing beers when you were a young lad. I'll never root for the White Sox but I'm one of Johnny's biggest fans. 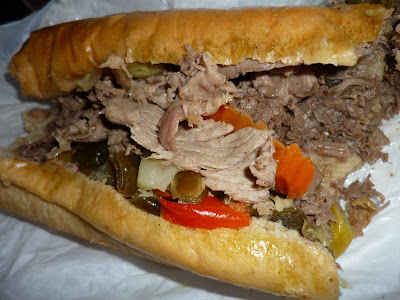 Its rare to find a beef shack that doesn't make its own homemade giardianra. While it is a true statement that they also make their own sweet peppers its nothing more than green and or red peppers sauteed in olive oil.

Aside from the fact I've always eaten them with hot and not sweet, another reason I prefer hot peppers is because of the different ingredients each places uses to make their own signature style.

Fair enough... Maybe you can start ordering a side of sweet and just sampling it... I'd like your take on the local sweets. You're my guru