Eating like a Mayan King in the Windy City
Crazy for carnitas?

Chicagoland is home to almost two million people of Mexican descent and what seems like almost two million Mexican restaurants. The options are endless and it would be impossible to try every single spot so I'm lucky I found Don Alfredo Carnitas. It happened after I had a very unsatisfying sub from a well known joint in Forest Park. In Mexico pork carnitas are a specialty where they take all parts of the pig and fry it in large barrels of lard for an extended period of time and then proceed to chop it all up and throw it in tacos. When ordering carnitas you are usually offered outside pieces from the shoulder that are crispy or innards pieces like tendons and all that stuff with the flavor. 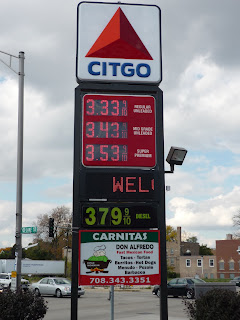 Yep it was attached to a gas station which can either be a good thing or a terrible thing. Its always a good sign when there's about 10 different people waiting for takeout. It was even better to see that they were all taking carnitas. I opted for two carnita tacos but chose for the homemade tortillas instead of the $.99 special with store bought. The homemade tortillas may be a weekend thing but they are an option I would advise greatly that you choose them. As much as I love Mexican food and pork I am by no means a carnita expert. I do know a damn fine taco when I taste one and these were really good and the homemade tortilla and homemade salsas took them over the top. I especially liked the fact that there were some really crispy pieces paired with some extra juicy chunks. I think they were $1.50/each and worth every penny.

I got the feeling from the smell of the heavenly hog with lines of people and fact it is attached to a gas station that it was good eating and it was. Even though there can be a line it moves fast and on the weekends its quite entertaining watching everything go on right in front of you behind the plexi-glass. The men are frying and chopping the carnitas while the women prepare homemade salsas and tortillas and they sure make a great team. 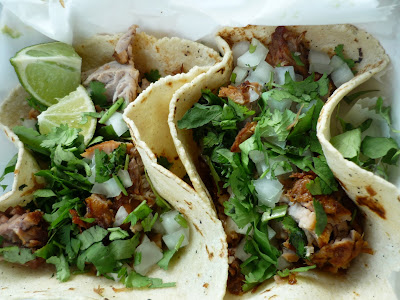 nice post. i'm a big fan of carnitas but haven't had much success finding a go-to place for them. most places phone in a lame version of braised pork shoulder and then griddle it or you just end up with greasy gristle. the only real good versions i've had have been made by home cooks.

i don't get down that way too often, but if i do, i'll keep an eye out for this place.