Chicago is a land rich in many places to grab a sandwich for lunch. If you want to try something different check out one of the many Vietnamese places that offer bahn mi sandwiches for takeout. The Vietnamese version of a po' boy is a fresh cooked French baguette with varying meats that consists of super fresh cilantro, jalapeno, pickled carrots, onions and cucumbers creating an amazing fresh, spicy flavor. There are many places that serve these Vietnamese lunch favorites on and around Argyle St but my favorite comes from a place called Nhu' Lan bakery in Lincoln square. Its a small place geared towards takeout for the Vietnamese crowd and they make a killer house special bahn mi. 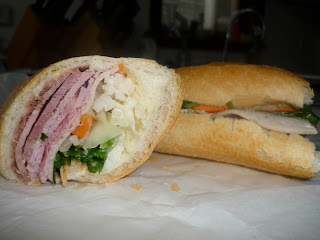 The house special has jalapeno, cilantro, pickled carrot, cucumber, lettuce, pork pate, headcheese, ham and some actual cheese. It all comes together to create the best bahn mi I have eaten in the city and I have been trying places for over 5 years now since I first read about them. The price is ridiculous at under $3. If your going to try a bahn mi make sure its from here because these are on another level compared to other favorites around town.

Chicago doesnt have a great number of great deli's other than Manny's the list is pretty empty. I wouldn't consider Max & Benny's to be a great deli but it gets the job done. If it wasn't halfway to Wisconsin I would get there more often but I'm rarely out that far North. I really like the matzo ball soup but am no expert on that stuff. My combo sandwich of corned beef and pastrami on rye with swiss was decent and they charged like a real deli but didn't stack the sandwiches like one. The potato pancake was good but I love those and never have bad ones. As a whole it wasn't bad enough to where I wont return but I would never drive out of the way to go here. If I'm in the area I would stop by if I was craving some deli food. Its always packed so they're doing something right. 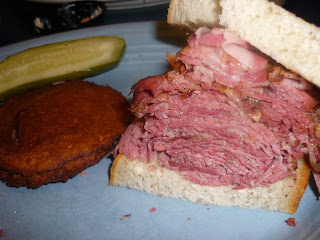 This was ok but I want to see this from a deli... 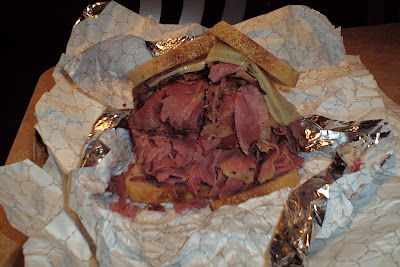 My go to sandwich in Vegas: The "Woodey Allen"-corned beef & pastrami-from Carnegie deli at the Mirage

I was wondering if you would ever be interested in becoming a featured publisher with Foodbuzz.com? If so please conctact me at lizstambaugh@yahoo.com