If you've spent enough time in Chicago you've likely passed Duk's at the corner of Ashland and Erie, many have even stopped in at what's one of the coolest looking hot dog stands in the city, at least from an old school standpoint. It's been there for a long time. Across the street there's a restaurant space that's changed often this last decade. There used to be a place called The Big State which was a Mexican restaurant ran by a family from Texas. We liked it but it closed after a couple years. The latest spot to call the corner home is Sabroso! Mexican Grill ran by a family from California. 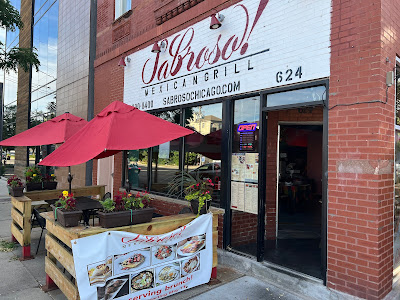 Recently Opened in West Town
The menu paired with the reviews (mostly positive) had tempted me the last few months so I stopped in one day when I was in the area with some people who were hungry. They have a few tables you can sit at outside on both Ashland and Erie. It's byob judging by the bottle of wine an older couple was enjoying with their meal. The menu has a few things that catch the eye as far as interesting things you don't see served at most places. The first was an order of Sabroso! Beans which the menu lists as Peruano beans, homemade chorizo, cotija cheese, pickled jalapeños, pickled onions and pickled tomatoes. They come served with all the fresh fried tortilla chips you want which are the perfect delivery vehicle for this creamy and spicy concoction of refried beans. I could eat this as a meal itself. 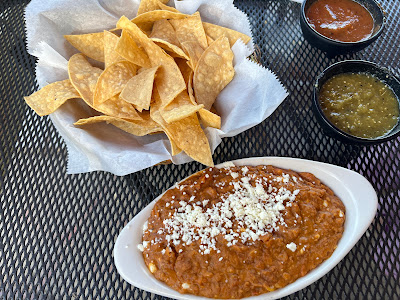 Sabroso! Beans at Sabroso! Mexican Grill
A few of the reviews mention the California Burrito. It's a popular regional dish in Southern California and especially the San Diego area. It's one of those things people will sometimes ask about as far as where to find one in Chicago. If I'm being real they're never as good as I think they're going to be but some people really love them like they grew up on them. The Cali Burrito consists of all the traditional fillings of an Americanized burrito but instead of rice and beans it's made with fries (plus carne asada, guac, pico de gallo, and cheese). The version at Sabroso! comes with beans and lettuce too. It was ok but I probably wont get it again because it didn't surpass my typical go-to spot for a steak burrito. 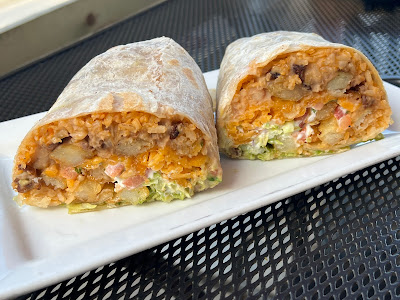 Cali Burrito at Sabroso! Mexican Grill
They list some specialties of the house including an excellent chile relleno plate. It's a pretty traditional prep with a mild but tasty tomato sauce and cotija and crema on top. I also enjoyed their black beans as they give you a choice between those and refried beans. No pics but the fish taco is also good enough to come back for. They're made with corn tortillas made on site and come loaded with battered fish and some refreshing toppings including lettuce, tomato, and a special sauce. 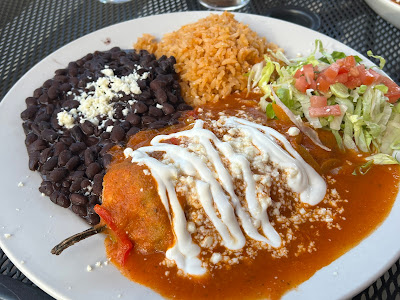 This is also a good place to get something to take to On Tour Brwg. on W. Hubbard St..

I saw your Nola trip report back when you were on Roadfood. I have always though your trip reports were second to none. I'm planning a trip starting from Lockhart, Texas too Lafayette and the Boudin trail, Nola and then follow the road to Florida. Any Ideas in the Lafayette area ????? After reading your report, it looks to be a good area to stay a few days. Looking for plate lunch and of places.......Thanks.....Bill