I’ve found myself more interested in Vegetarian dishes of late. Not necessarily as a cuisine but I'm equally interested in the veggie and meat offerings when I’m dining out at a spot that does a seasonal menu. I’m not talking about the type of stuff that’s makes burgers and bacon vegetarian but rather the use of what’s in season cooked in a way that doesn’t need meat. If I’m going to eat Vegetarian I don’t want chili or a Reuben sandwich and such. I want something that makes actual vegetables and grains taste great and the region of South Asia and India in particular is really good at this. So I recently decided to try a popular mini chain called Honest that has a few Chicagoland locations including one in Niles right around the corner from the large Patel Brothers grocery store that anchors the lot. 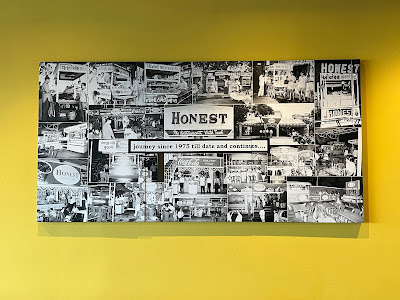 Locals Favorite in Niles
As is typically the case with international spots like Honest it’s tough to find any info online about it’s history. But as you can see in the picture above it seems to be a brand from India that first started out as a street stand but I could be wrong. Judging by the crowds this place brings in on a Friday night I would venture to guess that Honest is a popular place with the local South Asian community. Despite the fact they were jam packed my order came out in timely fashion which was a bit of a surprise. I started off with the Bhaji Pav bc it’s their signature dish which consists of spiced vegetables and a potato mash served with soft buttered rolls plus raw onion. I’d never had this dish that traces it's origins to the textile workers of 1850’s Bombay. So I have no other versions to compare it too but I was satisfied with what we got. The vegetables and potatoes were all melded together to create a thick curry like sauce and the spicing was excellent, as was the toasted bread used for dipping. 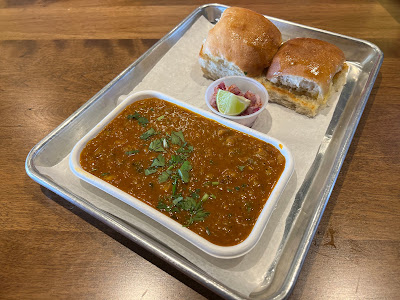 Bhaji Pav at Honest
Honest offers up a handful of Indo-Chinese classics including Hakka Noodles which are a favorite of mine. It seems like everything here leans spicy bc we tried the original style, not the Szechuan, and they were still pretty spicy while also being exactly what I wanted in terms of a stir fried noodle dish, these were clearly cooked over a high heat. This was another dish that didn't need any meat. 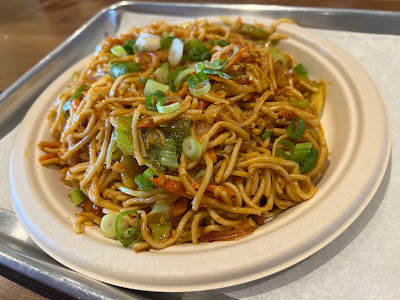 Hakka Noodles at Honest
You won’t find it on the menu (at least I couldn’t for the life of me) but I asked the friendly lady behind the counter if they had Vada Pav and they do. The street food favorite from Mumbai has become one of my personal favorites that I plan on trying whenever I see it on offer. I’ve only had a few and have yet to try one that I didn’t like including this one which came with a roasted long pepper and a side of green chutney. It had minimal toppings compared to the ones in Mumbai I've seen on YouTube but it’s all about the crispy ball of fried mashed potatoes mixed with green chile in-between a soft and sturdy roll. An excellent snack and perfect as is. Find good Indian fast food at Honest. 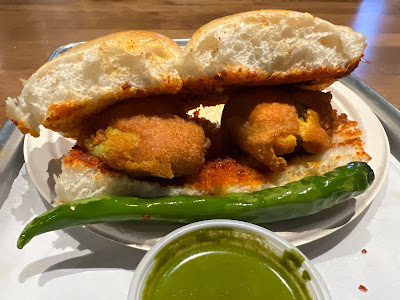 Vada Pav at Honest in Niles

I live in united state i love indian food i thought i will visit here after doing phd thesis help online so i finished my work i tried this dish and it was very good. Honor me