Last month I wrote up on a new spot in the neighborhood called Union that's been warmly received by my neighbors here in Logan Square. It's the sister restaurant to Lardon which opened about a year before Union did. Lardon has undergone a few different paths as far as it's menu but made in-house charcuterie has been the focal point since it first opened. They do sandwiches and salads too. 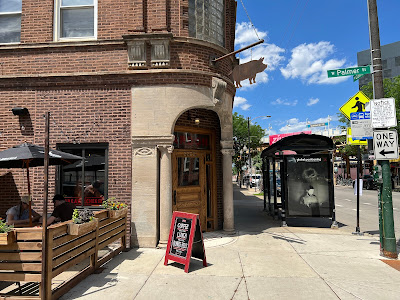 Newly opened in Logan Square
Lardon is the type of spot you can hang out at all day. They open at 8a and close at 9p and they have coffee as well as alcohol and a couple of food menus too. The charcuterie is served the duration of the day but sandwiches and salads are only for lunch. I've had the charcuterie a couple of times and enjoyed a full lunch spread with my mom on one of those visits. As far as the charcuterie goes most of it is made on site so I suggest ordering whatever it is you typically like. I especially like the Finocchiona since I love fennel. But I also like the spicy cuts like Salame Calabrese and Coppa. They're all excellent and made even better when paired with some local Midwest cheese which I always like to get when I see any on offer. Lardon has a few from the region including an awesome soft goat cheese from Capriole Farms in Indiana that I've enjoyed on each of my visits. 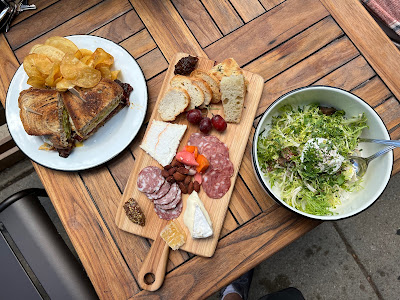 Lunch Spread at Lardon
The lunch menu has a couple of salads and six sandwiches to choose from. The Frisee & Lardon is a classic recipe that features a soft poached egg, rendered pork belly, fine herbs, shallot, Dijon mustard, and banyuls vinegar. It was good but the pork wasn't as well rendered as it could've been. It was like they just threw some scraps from the charcuterie in there or something. Their pastrami was called the best in the city by Infatuation and it may be but it's not like there's a ton of good pastrami to be found around town. I liked it but thought there wasn't nearly enough in their rendition of a Reuben which comes with said pastrami, Midnight Moon gouda, fancy sauce, house kraut, and deli pickles all on marbled rye. It was pretty well put together save for the fact there wasn't much meat. Even the chips it's served with are made in-house so there's no denying the commitment this place takes to putting out a proper product. The outdoor patio is popular so consider making reservations. 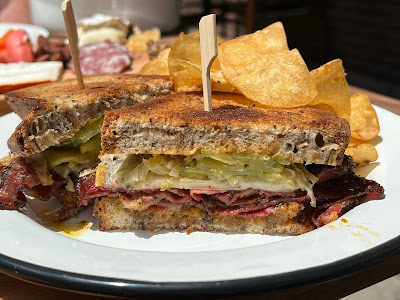