The Summer of 2020 shook the restaurant industry up. A year later spots have started to open back up for traditional service and new places are popping up too, as they always do. But the shift to smaller projects like pop-ups and ghost kitchens is still a thing and I for one hope it's here to stay. I'm not a fan of places like Wendy's and Chili's moving into ghost kitchens but for every Chick-Fil-A there seems to be a start up type spot offering up some interesting stuff. Pop-up's have proven to be a great way for an existing restaurant to get some easy income on days or times they're not in-use. In return people that are experimenting with projects get a place to push some food for a few hours a day and with that get an idea of what works and what doesn't before chucking a life savings at it. With summer in full swing we're seeing lots of different pop-ups while ghost kitchens continue to boom. 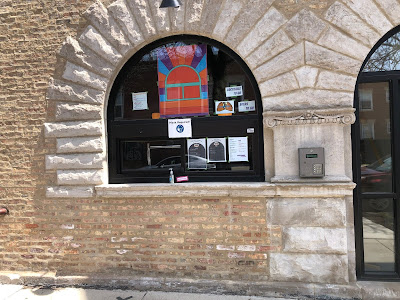 Kedai Tapao (@KedaiTapao)
One of 2020's most exciting pop-ups lives on here at the pickup window of Superkhana in Avondale. Superkhana was able to adapt to the pandemic as well as anyone. Typically a sitdown night out type place they pivoted to takeout and also hosted a trio of very interesting pop-ups including Kedai Tepao. On Monday's a couple serves up classic Malaysian comfort food that must be ordered ahead via instagram. They release their weekly menu on the social media app about a week ahead of the pickup date and you must reserve (pay) for your meal ahead of time, they sell out quick. You pick up your food at the Superkhana takeout window on Monday's and while I haven't had a chance to order the weekly meal I have made it over for their Malaysian roti which you don't need to reserve ahead of time. They offer up a few styles including Roti Canai (bottom flatbread and sauce in pic) and also the Roti Telur. The former is served with a typically spicy red curry with chicken and potatoes and the latter is basically an egg based version served with a dal curry and a terrific onion sambal type condiment.  Both hit the spot like the food from this diverse cuisine always does. Roti is said to have come to Malaysia and other parts of SE Asia through India. Malaysia and Penang in particular are high on my travel bucketlist if we’re ever allowed to leave the country again. But in the meantime it’s cool to see more and more Malaysian restaurants open up shop around the Chicagoland area. 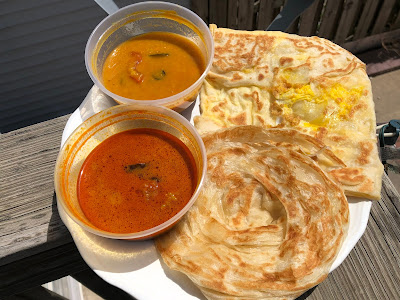 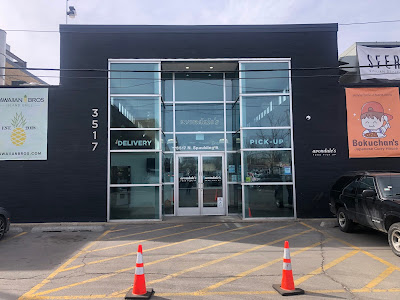 Ghost Kitchen Campus (3517 N. Spaulding)
The ghost kitchen campus that shares a lot with the Jewel in Avondale (3570 N. Elston) continues to be interesting. I wrote about one of their tenants in my last rundown of ghost kitchens, pivots, and pop-ups. Today I have three more spots posted here to share. All of them are worth your time making this nondescript building that's hard to spot from the street a hot spot of sorts for food in Chicago.
__________________________________

The folks behind Soul & Smoke are building up something big. They don’t have a brick & mortar but they have ghost kitchens in Evanston, Avondale, and the South Loop as well as a booth in Time Out Market plus a rotating food truck. I picked up a brisket platter at their Avondale outlet where the guy ahead of me was grabbing Famous Dave’s (doh!). It’s an interesting setup at this particular ghost kitchen which houses both creative up and coming concepts and also QSR behemoths like TGI-Friday’s. Seems like a David Vs. Goliath type setup but we all know what happened with that. The brisket is probably as good as I’ve come across in Chicago. Nice smoke flavor plus lots of bark = lots to like. I also thought the barbecue sauce was excellent and the same can be said for the creamy mac and cheese, the tender greens, and the killer cornbread too. She had the shrimp and grits with andouille and the little taste I got was great. Of course as I was leaving with the food a couple outside asked if I knew where Famous Dave’s was at. Below Soul & Smoke as I pointed to the sign on the wall (literally and figuratively). My cousin used them for a catering gig recently and that was good too. 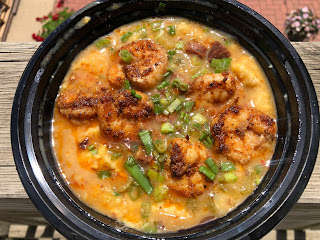 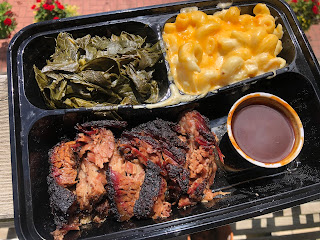 Here’s another interesting concept coming from the ghost kitchen campus over in Avondale. This is my first time trying Scaccia or Sicilian style stuffed flat bread (pronounced Ska-Cha). Its made with a very thin rectangular layer of pizza like dough that’s filled with a variety of ingredients and folded on itself three or four times. It’s popular on the go and sometimes eaten at room temp or cold. Some online digging revealed this was once a popular snack in Middletown, CT but it seems as though not lots of spots out there still make this Southern Italian specialty.  Enter Sfare where they’re making scaccia and arancini in a variety of ways. Pictured is the Chicago Style Scaccia with Sfera Mariana, mild Italian sausage, green pepper, mushrooms, mozzarella cheese (served warm). Paired that with some of their classic arancini. A welcome addition to the city’s growing ghost kitchen scene. 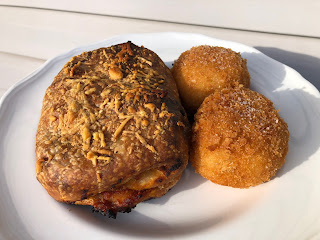 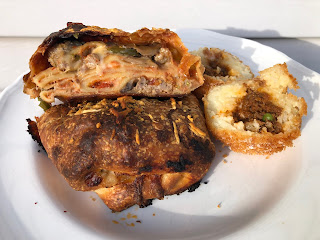 The fried chicken sandwich at Kiosk Balkan Street Food is an absolute beauty. It comes served on a homemade somun that’s typically used for cevapi (also available). The it gets dressed with cabbage, pickles, and an urnebes of spicy peppers and garlic feta. Urnebes being a popular Serbian condiment that varies by region with white cheese and hot chili peppers being the main ingredients. Definitely not your typical fried chicken sandwich. I cant wait to further the menu of this modern iteration of an Eastern European grill. Yet another cool spot operating out of the Avondale ghost kitchen. 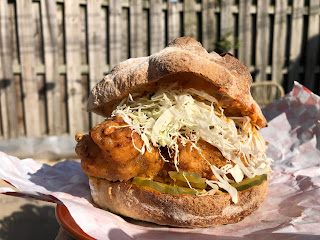 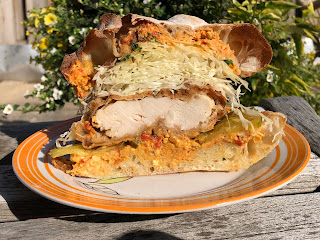 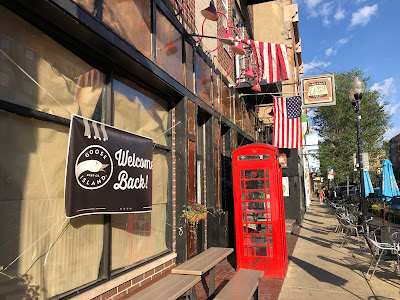 A Palestinian spot has popped up in an unlikely place. Yamma serves up a vegetarian friendly menu inside on Pint Pub on Milwaukee in Wicker Park on Wednesday's - Sunday's. According to an article I read in Chicago Eater Yamma is the project of a trio of Chicago service industry vets and the food is “health-conscious, flavorful, allergen-sensitive Mediterranean food” though the lens of Ruba Hassan’s desire to highlight her family’s culinary culture." I enjoy eating more vegetable forward meals during the summer months when there's a bounty of local produce to indulge in. Yamma's menu was calling us on a hot summer day when we didn't want to grill or eat anything too heavy. The menu features what they call "roll ups" made from traditional shrak bread. We tried both the lamb and a fried mushroom roll and were surprised by how big they are. The lamb is a shredded variety and I much prefer lamb meat grilled so I preferred the fried oyster mushroom wrap to the lamb but both were great for takeout. We also tried some lentil fritters and a breadstick like dish made from fried pitas with a refreshing yogurt based sauce. The menu seems to be switching up but wraps and fritters remain. 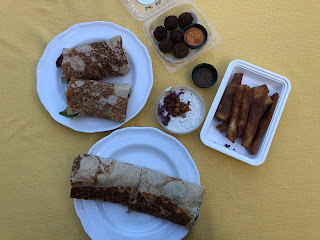 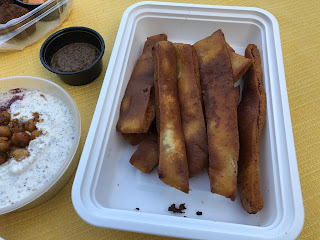 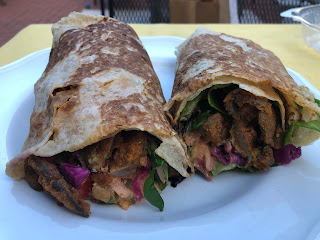