So I have this thing I say when discussing Chicago restaurants and how many I think I've tried, the answer to which is I don't know. Tons but there's just as many spots that I haven't tried as those I have. But while I haven't been to them all I pretty much know of them all to the point where when a new restaurant does open I notice it's new immediately. So by getting around the city and browsing through sites like google and yelp I've documented pretty much every restaurant in town in my head over time. One such spot that I documented years ago is Pockets over on the corner of Lincoln, Wellington, and Southport in Lakeview. I've passed by this place a countless number of times in my lifetime going back to my childhood years when the logo would catch my eye. But I'd never tried it, or even thought of stopping in. The only thing that was a bigger mystery to me was the Church of Scientology located next door on Lincoln. So one day recently I said f-ck it and decided to try it out. 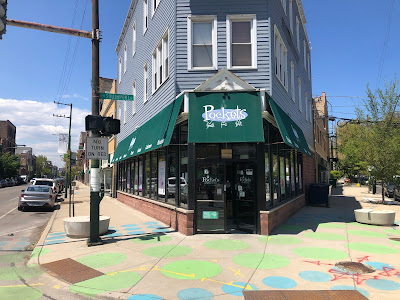 Locals Favorite in Lakeview / Lincoln Park
According to their website Pockets was born in Chicago in 1989. The Pockets franchise was founded by a guy who was inspired by a spot at the University of Michigan that served chipatis, a whole-wheat pita. The logo of Chip the Kangaroo was created by the guys landlord for $25 or so the story goes. I could see how the menu here would be popular in the early 90's as it has a very retro feel. The house named pockets is multi-grain bread that's baked on site and split open and stuffed with different salad concoctions that come with dressing on the side. They do custom pockets too. I tried the Asian Chicken Pocket which is pretty much a take on the Chinese Chicken Salad minus the citrus. I could tell the chicken was the frozen pre cooked stuff from Restaurant Depot or whatever but for those in the neighborhood that like salad this place can serve a purpose I suppose. I still ate the whole thing. 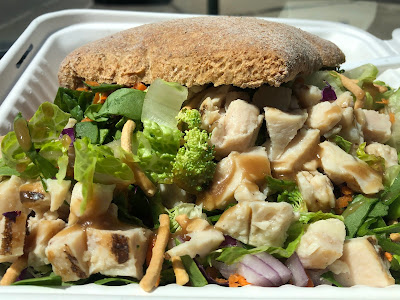 Asian Chicken Pocket at Pockets
I was tempted by the smell of calzones being baked fresh on-site as well. I said why the hell not and got myself a traditional calzone too. These are made with the same pocket dough except they're stuffed with ingredients and folded over before being baked. I chose Italian Sausage and peppers and which was paired with mozzarella cheese and marinara sauce. I was pleasantly surprised by this one. Despite the wheat baked bun this was junk food but I could see it being a guilty pleasure for some. The Italian sausage was fennel heavy and the sauce wasn't too sweet. The cheese was extremely well melted and the whole thing just worked as far as a quick carb bomb goes. They also do baked potatoes loaded with the same ingredients from their salad and calzone offerings. It's a retro spot and maybe it'll even come back into style. Hey it survived the Atkins diet phase so maybe Pockets lives long enough to make true on the belief everything that goes out of style eventually comes back in. 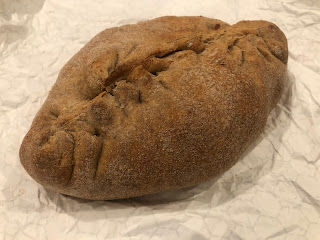 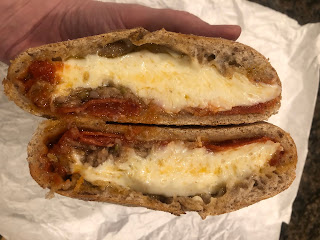