Because Chicago has the well known Greektown neighborhood it's assumed by some that there's great Greek food in the city to go with it. Not quite the case anymore as Greektown has become Greek by name only. There's still a few spots up and down the 200 block of South Halsted but it's merely a shadow of it's past. Plus nothing new as far as Greek restaurants go has opened up over there of late. Don't get me wrong there's some good Greek spots in town but they're scattered and many are in the suburbs. Enter Andros Taverna in Logan Square, a modern Greek restaurant that recently opened on Milwaukee in one of the neighborhoods many new condo / retail developments. 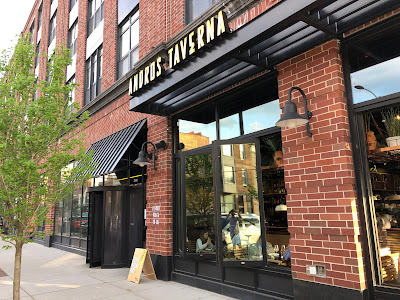 Newly Opened in Logan Square
Andros Taverna is the project of local Chef Doug Psaltis and his wife Chef Hsing Chen. Psaltis was with LEYE's RPM in a previous job. Chen is a pastry chef who worked at French Laundry as one of her previous gigs. As you could maybe tell from Chef Doug's last name he's Greek and thus this is a very passionate project for him. First off we got seated on the patio which is first come first served based off reservations. So you'll most likely need a reservation and only then can you maybe sit on the patio. So long as there's seating available. They can only hold parties of 4-5 people outside. They also have a drive up / walk up window that's accessible from the alley for taking orders to go. 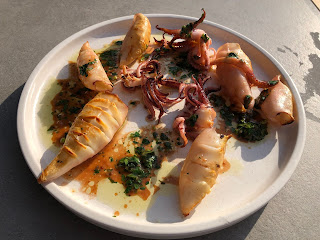 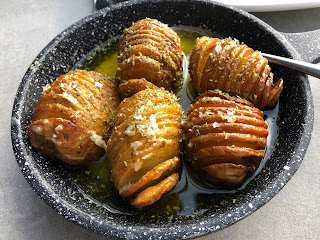 Grilled Calamari and Greek Potatoes
The inside of the space is very nice, it's a pretty place and you can tell it's going to be a popular spot to hang out this summer. The focal point of the kitchen is a wood burning grill. Unfortunately it was hard to see and so I couldn't get a great look at it but I made sure to check it was up and running on our visit. An order of calamari grilled over live wood was really well done. My only complaint was there wasn't more on the plate as I could've sat there and ate it all night on what was the first 80 degree day of the year. Also pictured up above is a side order of the Greek Potatoes done in a Hassleback style. I thought they were just ok. None of the entrees come with sides so it's best to order a few or maybe try one of the mezze platters that feature fresh woodfired pitas with crudites, char grilled kalamaki and more. Andros offers two different preps of fish both grilled over the live fire. We tried the smaller of the two which is a sea bream grilled up in the typical Greek style with the typical Greek flavors. Simple but skilled in prep. The whole grilled sea bass ($46) was tempting but there's always next time. 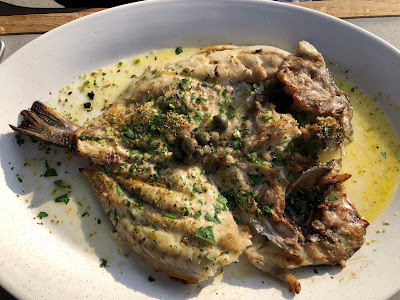 Grecian Sea Bream at Andros Taverna
The reason for there being a next time is I really liked the traditional pork gyros. It's listed as Georgie's Gyros on the menu and it's made with beautiful cones of pork that sit horizontally over the live fire and are sliced fresh to order. The meat which I believe is pork belly gets a very nice grilled smoke flavor and comes served on one of the previously mentioned woodfired pitas with tomatoes, cucumber, and French fries which is a pretty standard practice over in Athens. A very fresh spiced yogurt sauce comes served on the side and really livens up the sandwich as whole. It was probably the most expensive gyro I've ever had at $22 but it was also one of the most memorable I've tried. 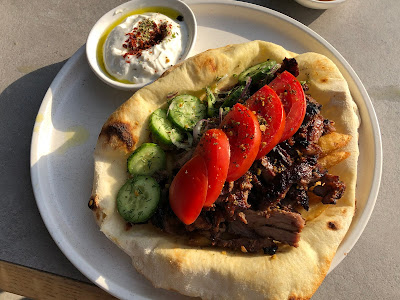 Georgie's Gyros at Andros Taverna
My wife and I have started becoming more dessert focused when dining out by which I mean we used to usually say no thanks when they'd ask if we'd like to see a dessert menu. But as warm weather nears it's always hard for me to turn down a delicious sounding fruit based dessert option. On this evening that would be the vanilla soufra which was described as a ruffled custard pie with layers pf crispy phyllo topped with cinnamon, honey, pistachio, and huckleberry compote. Another winner and with it a contender for one of the years best dinners. Granted this was the first time we had dined out in Chicago this calendar year I have a feeling it will stick around as one of the favorites based on what followed. Though we were set on our dessert choice for the evening our waiter made a compelling case for trying their baklava froyo with baklava crumbles, pistachio sauce, menuca honey puffs. We ended up walking over for some the following night and it's our favorite new treat in town. I'd been hoping that a modern Greek spot like Andros would open and we're happy to have it near us. 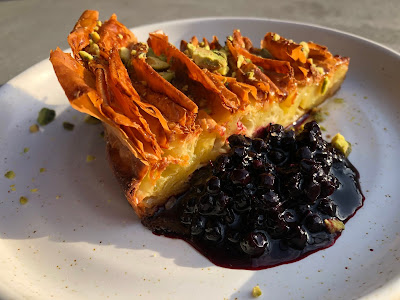