One of 2020's more anticipated openings happened toward the very end of that calendar year. Taqueria Chingon is the project of a few of the chefs and players at Bucktown's Le Bouchon. It opened to lots of love from local media most of whom these days have been reduced to sharing their current food thoughts on instagram. I visited shortly after they opened and people immediately wanted to know how it compared to some of the other taquerias I talk up. Not fair. You cant compare a chef driven taqueria like Chingon to a taqueria somewhere in say Little Village. It's pointless and quite frankly annoying. Tacos are always going to be cheaper at the more "authentic" spots which doesn't mean they're better or anything but some have this idea that a taco should never cost more than a couple bucks. It might not be straight up racist but the idea that the food should be cheaper at an immigrant owned spot is a thought process I cant stand. I'll pay whatever price (within reason) for a taco so long as it's good. Tacos at Chingon are in the $4/$5 range. If that's too much you need to make more money. Not to mention that tacos in the $1/$2 range use much cheaper ingredients. 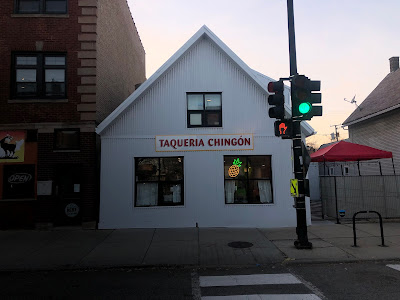 Taqueria Chingon sits on Western directly next to an old school birrirea. Chingon is new school by every definition of the term. All you have to do is go next door to see the difference. But today's post is about Chingon and so we'll start with the tacos al pastor they decided to put front and center. Personally I think the traditional taquerias are good for this and that while the chef driven ones are good for other things. One thing I cant stand about alot of the new school taco spots is their redundant and uninspired menus. I feel like for the most part any newly opened taqueria with a social media presence and what not usually presents a boring menu all things considered. They all have steak, chicken, fish, veggie, and "al pastor" as in marinated pork as in not the real definition of it. Chingon has a full fledged trompo up and running all day every day (from what I've seen). 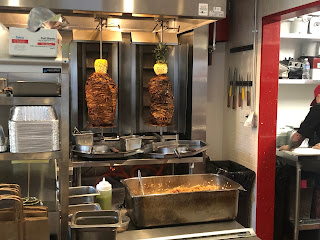 A peek inside
In the picture up above you can see two trompos of spinning meat. One made with pork and the other is a vegan al pastor made with celery root and more. I tried the pork their first week in business and it's pretty damn good, for chef driven al pastor anyway. That's not a knock on these as most chef interpretations of al pastor tend to overlook what makes it so great. Chingon serves a traditional offering. The difference from some other al pastor places around town is their thick and fluffy housemade tortillas. Some say they're too thick but they do load up the tortillas so it helps it all stay together. I'm of the belief that a housemade tortilla doesn't make a taco automatically better. There's some tacos (like fish tacos in Baja) that wouldn't taste the same using some fancy tortilla made from heirloom corn or whatever. I still prefer some other spots around town where the tacos al pastor are more like you might find in Mexico. But that doesn't mean the version served here cant be delicious. 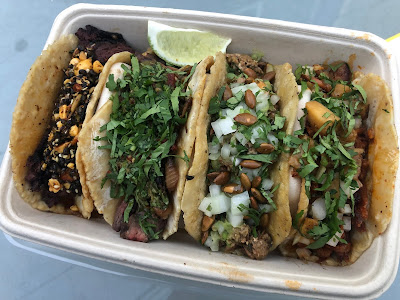 I think where Chingon really stands out is in their other taco offerings. None of which are normal as in steak with cilantro and onions and maybe a slice of avocado. They have a steak taco here but it's dressed with a chipotle chimichurri. Other offerings include a Pig Head Carnitas topped with a Mexican Giardiniera or then there's my favorite thus far the Morcilla (blood sausage). It's made with Pickled Apple, Red Onion, and Salsa Macha. Where else can you find a morcilla taco like this, not just in town but anywhere? There's some creative tacos on the menu but they don't stray too far from the flavors that make Mexican food so good. Their specials have also been inspiring with options like duck carnitas making an appearance in an ode to one of the partners French cooking. So while it's stupid to compare this place to everyone's favorite taqueria in Little Village or some other Mexican heavy neighborhood I think it's fair to say it's one of the better chef driven taco concepts in town. 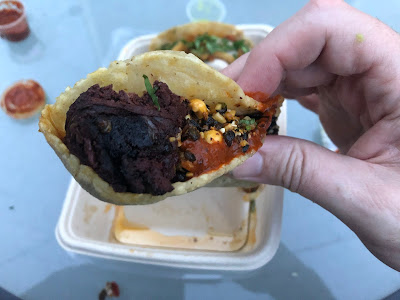