After coming back from Hong Kong I found myself wanting some wonton soup. Something, anything, remotely close to the bowls I had at the famous Mak's Noodle Shop. I cued up the google machine and got to looking. I wasn't expecting to find much but I ended up coming across a totally new to me spot. I was surprised I was just learning of Wonton Gourmet as it's a suburban favorite judging by the many reviews. Not to say all of them are glowing but there were plenty and they went back years. 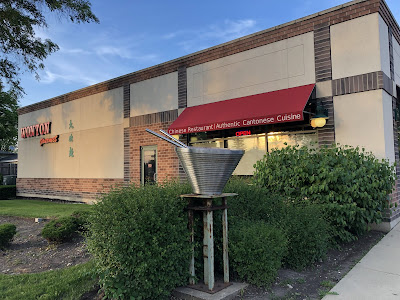 Wonton Gourmet is a classic suburban Chinese dining destination. It's spacious with a big lot and attracts many large families and business lunchers. They specialize in Cantonese cuisine and have enlarged photographs of Hong Kong on the walls. The menu is a what's what of the most traditional commonly seen Cantonese dishes. But with wonton in the name that was what I was there for. The menu has an entire section dedicated to wonton soup with or without noodles and or BBQ pork, or duck, and the likes. They also offer their housemade wonton as a side in few different ways. I got the wonton soup which did the trick. By which I mean I've never really met a wonton I didn't like and these were no exception. But the broth and noodles were both just ok and nothing like that at Mak's. 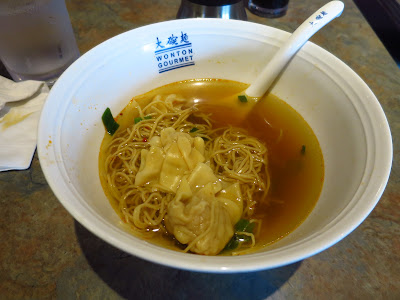 
Another dish I've been chasing since my trip to Hong Kong is the pork chop over rice with an egg from a spot called For Kee. It's to this day maybe the best breakfast I've ever had. Wonton Gourmet serves a bone in pork chop over rice with a fried egg and fried onions on top. This wasn't similar to the version served at For Kee but it did remind me of a Chinese style Maxwell street pork chop. 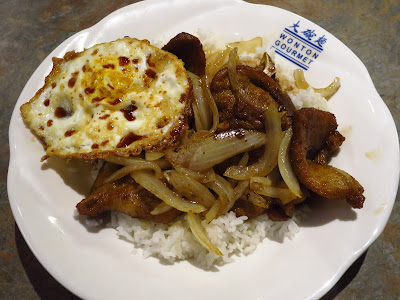 The most popular menu item judging from the google and yelp pics might be the Gan Chow beef chow fun. It's made of fried wide noodles with a heaping amount of beef, Chinese broccoli, and gravy sitting on top of it. The noodles underneath don't stay too crisp too long but the ones on the outside do. You get a nice combination of textures with each forkful. The meat is extra tender and the gravy has a nice beefiness to it. The Chinese broccoli stems remain crunchy throughout. Even though I've had this dish once I imagine it enters my rotation as I was satisfied with what I got. It was darn good. 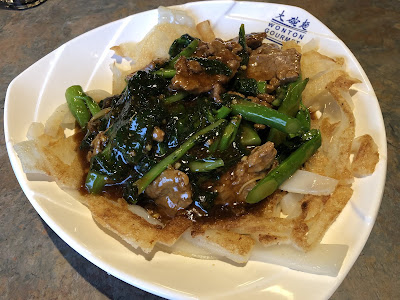