If you've ever been riding on the Westside and smelled sweet smoke in the air around Pulaski and Wilcox you rode right by the Jerk Taco Guy. It happened to me a few times before I was able to see him in action in the empty lot where he sets up when its warm outside. But then before I knew it the brutal winter hit and I never got a chance to go back. 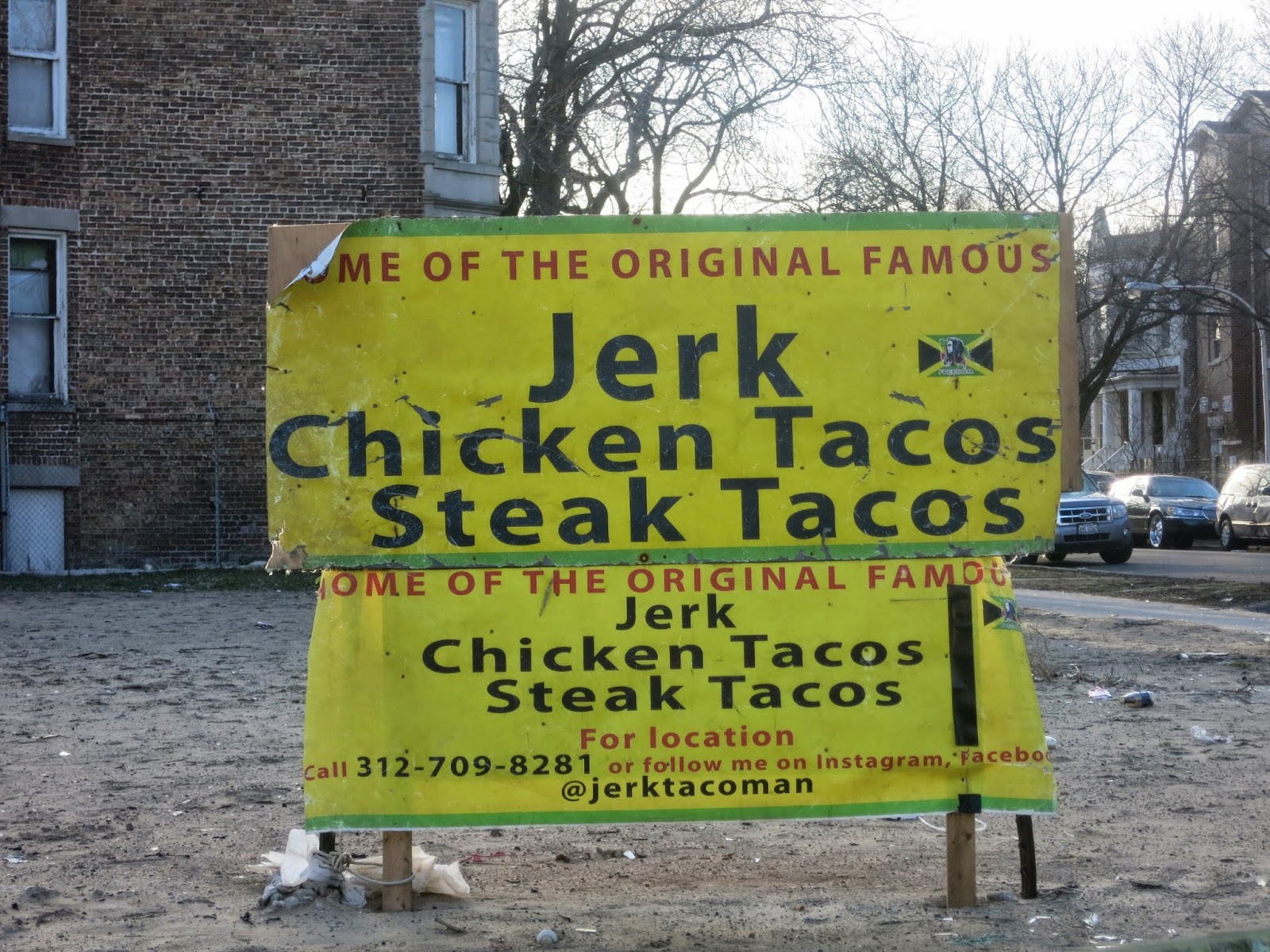 A month or so ago I was headed home riding North down Pulaski when a whiff of jerk chicken snuck through my open window. I looked to my left and there was no sign of him outside so I did a roundabout and noticed a sign of his attached to a building that was housing a hair salon. I decided to further investigate and soon realized the barber shop was also where the Jamaican Jerk Shack was at. So I walked in and brought a halt everyone's conversation before I asked if this was where the jerk chicken was at? "Right over here honey" was the reply from a lady at the register towards the back. 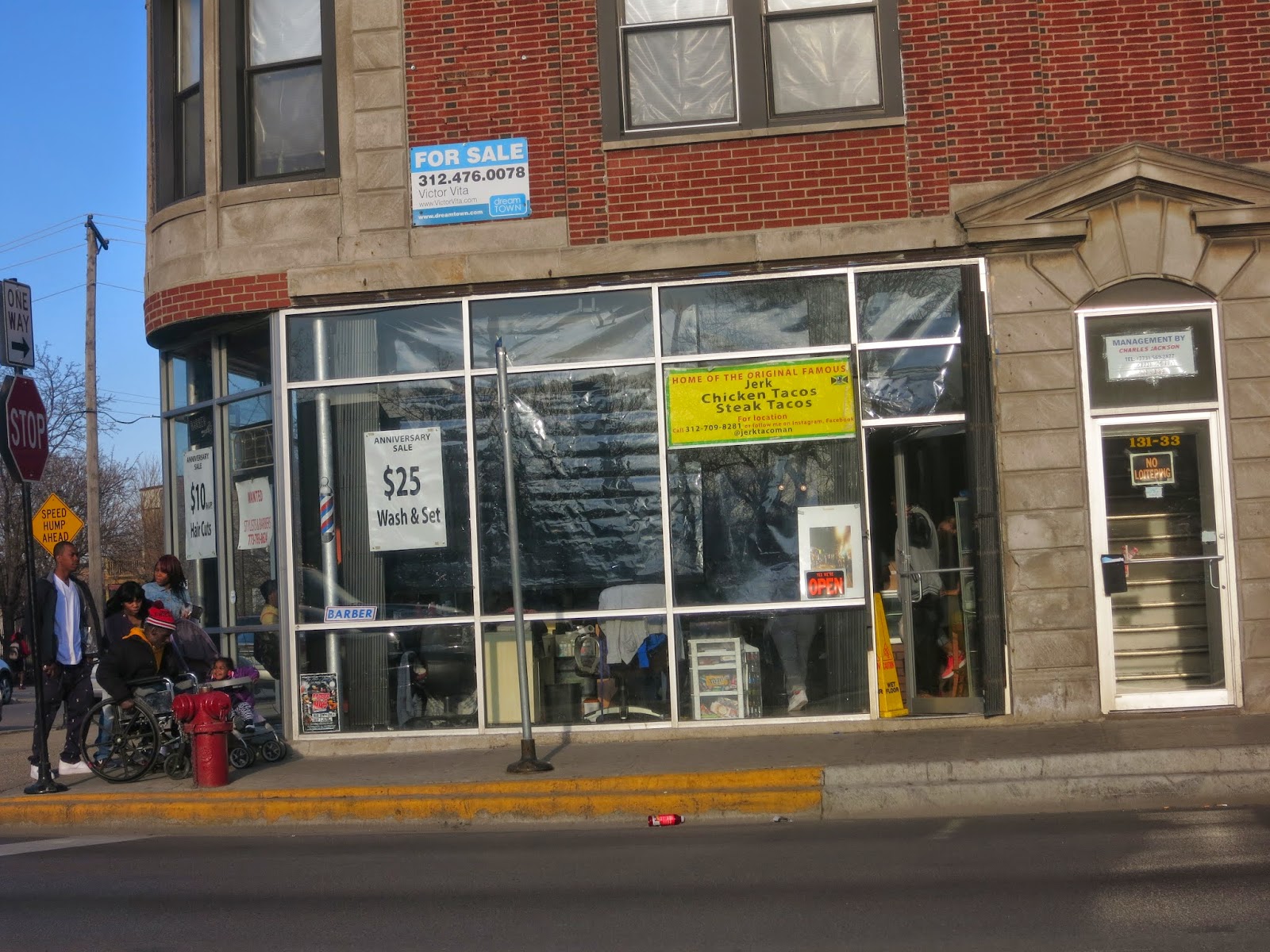 She showed me a menu card and I placed my order for two jerk chicken tacos ($7) which made the most sense since this was my first visit. Other items offered were the popular jerk steak tacos as well as jerk chicken dinners and other Jamaican favorites and other creations like a jerk steak sandwich and the likes. After paying I was given my receipt and told to head next door to pick up my order. 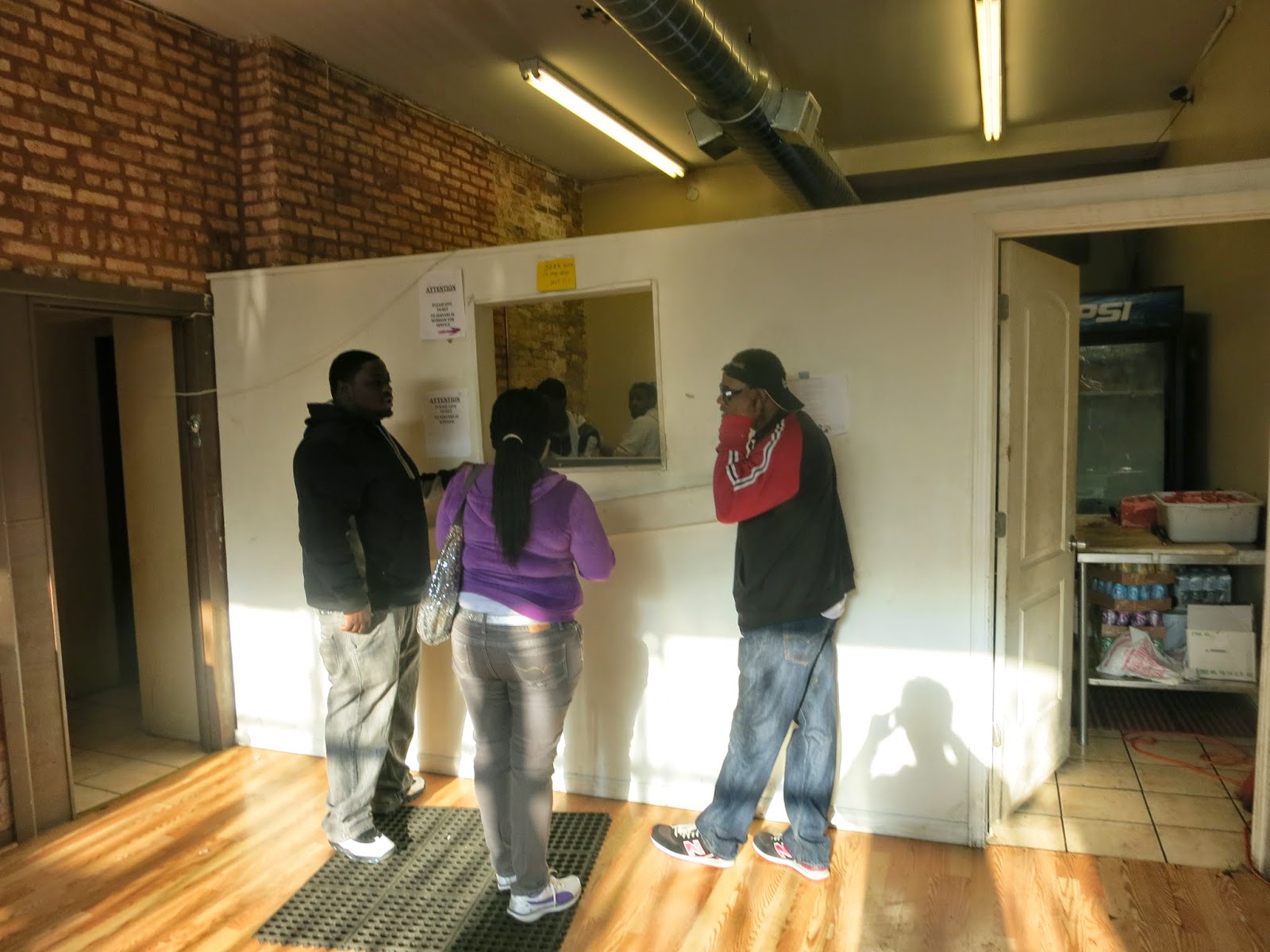 The room next door

Turns out the smoking rig is outside in the back lot of the barbershop storefront which this space is attached to. I waited for my food as lots of chopping sounds rang thru the room. Soon later my number was called. Don't throw your receipt away as this isn't a Check Please type place, more like Where's your Ticket?!?! 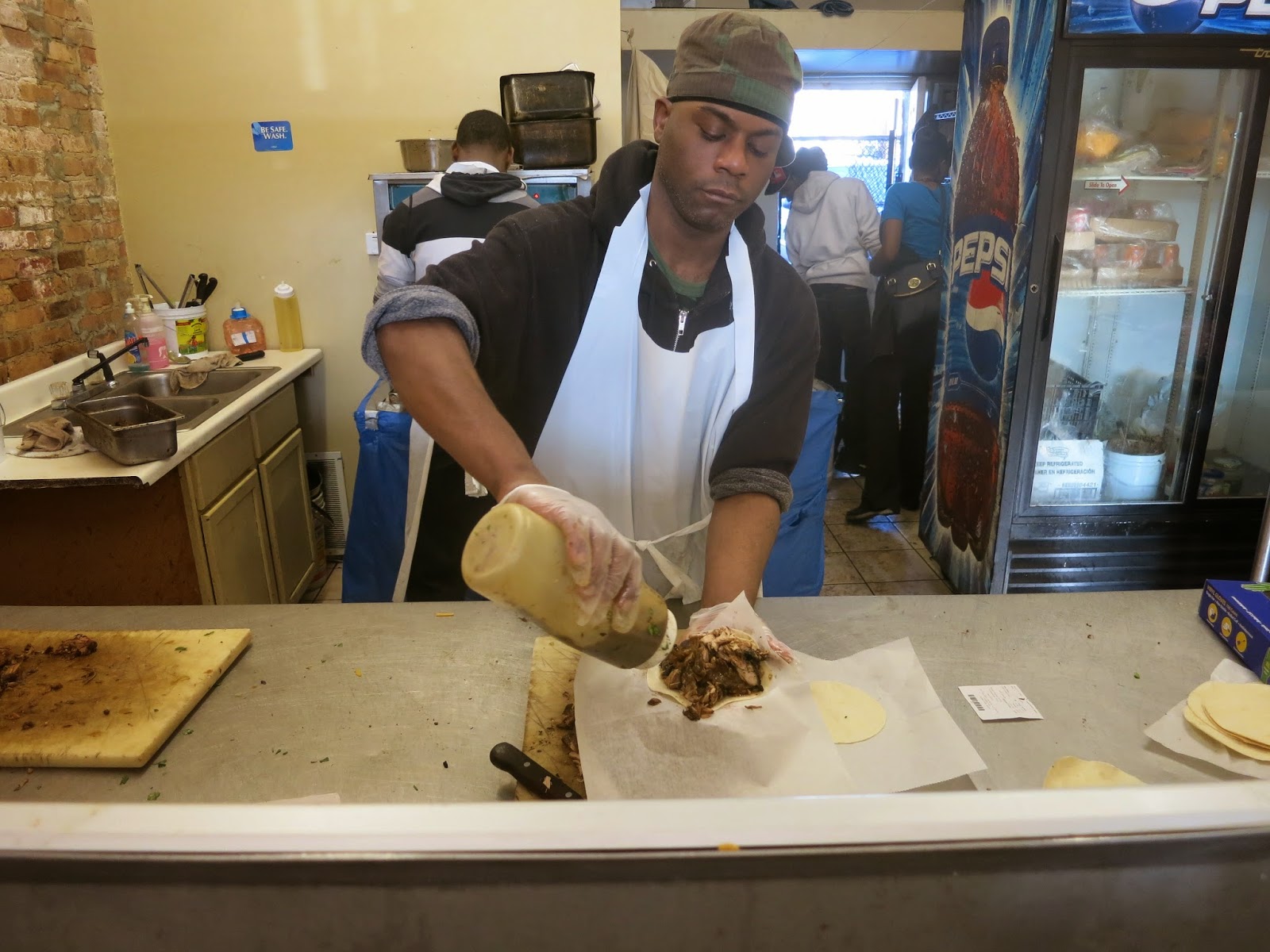 First thing you notice about these is how stuffed with chicken they are. It's too hard to eat them as is without gnawing down on some of the meat to make a better ratio of it to tortilla. Everything includes onions, cilantro, shredded cheddar and the house jerk sauce. The chicken is indeed smoked and comes with the perfect hint of it and the jerk sauce is exceptional. Really nice heat but not the type that makes you uncomfortable though not for the novice either. Overall I thought they were really good as cilantro and onion always match well with tortillas and heat. The whole process took me back to the islands as the only place to eat these is in your car or al trunko. It's only a matter of time before Caribbean Fusion tacos take hipster hoods by storm. 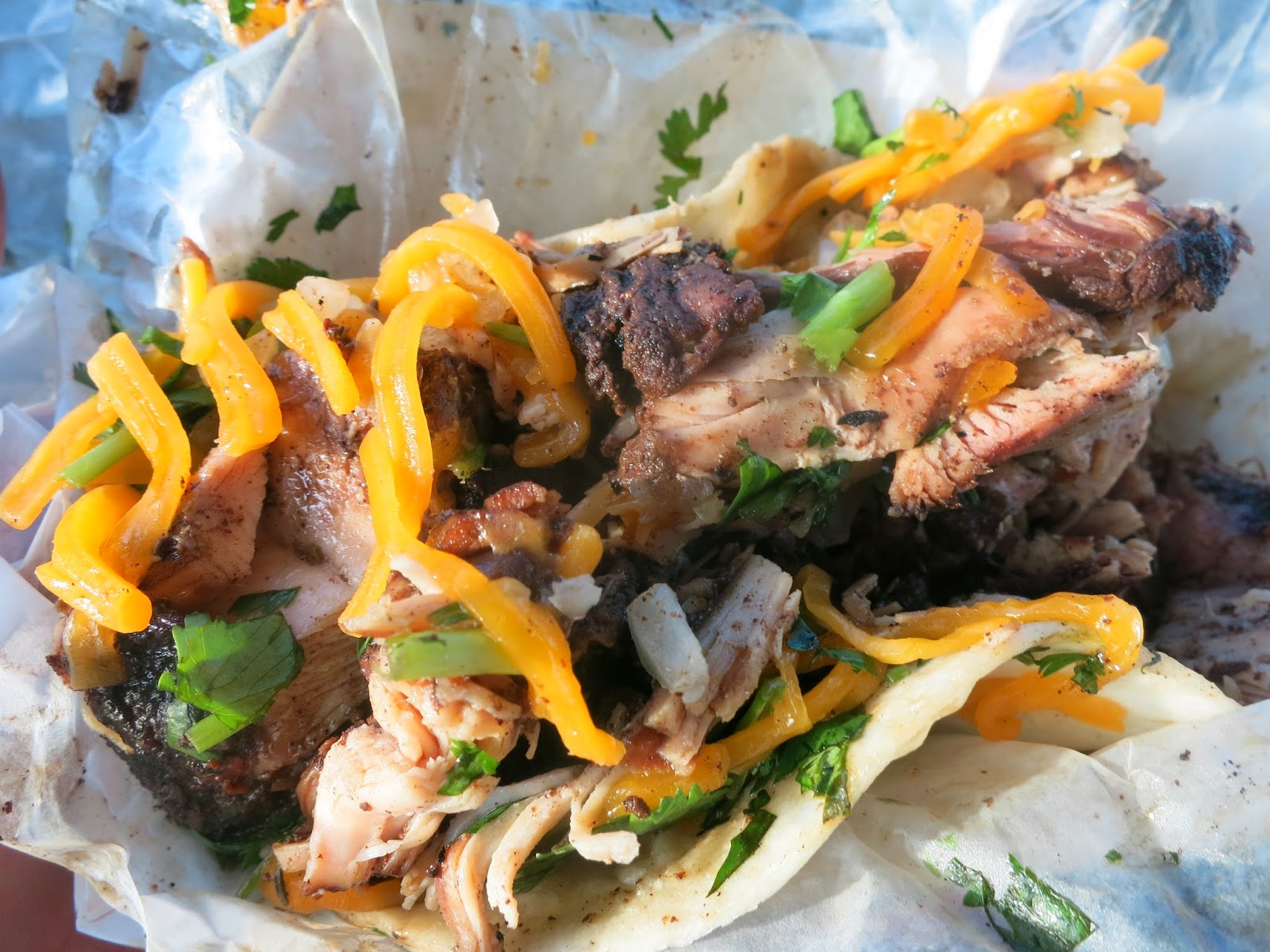 Get professional trading signals delivered to your mobile phone daily.

Start following our signals NOW & earn up to 270% daily.