As the cities Mexican population grows so do the surrounding areas. You'll find more Mexican families settling in places like Joliet and the Fox River Valley. Places that once only had the usual suspects you'd find in a Midwest suburb all of a sudden started seeing family owned grocery stores, taquerias and such. As the years go by these lil' shacks become hipper sitdown spots and with that the people start coming. The tribunes Kevin Pang did himself a little taco tour of the area that resulted in even more places I would like to try down in this sprawling area of good Mexican eats. Lets check some of the ones I've been to for our Mexican Fiesta in May. All Mexican food, all month long.
______________________________________


I had a pretty top notch bowl of CESJ in Aurora this past winter. Taqueria El Brasero is just off the highway the exit after the Outlet Mall (if coming from city). It's a sit-down spot that sits in a strip mall so you might not think twice about it but I would stop in if in the mood for some meat in it's own juice.

I dont know if this place reaches Los Gallos' level when it's on but it they serve a very good bowl with some extra crisp bacon sitting in a slightly rich, nicely flavored broth. Included were all the usual's with exception of the dried chile peppers which I realized weren't there until after I ate, otherwise I would of asked for some. The steak had a few chewy fatty pieces but for the most part was finely chopped and cooked crisp which I like. This might be a weekend only offering so call ahead if interested. 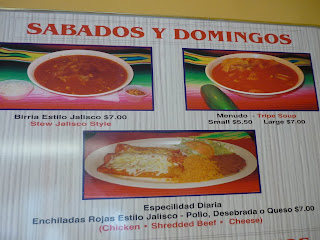 Some specialties of the House

Chicago has a pretty heavy population of people from the state of Jalisco. What we dont have an abundance of is places that serve real deal tacos dorados. People in Aurora and elsewhere (they have a few locations) rave about them from Jalisco tacos. I tried one with deshambra (shredded beef) and aside from the fact it was fried fresh really enkoyed the spicing of the shredded beef inside. They also had an al pastor spit going on my visit so i tired one taco al pastor and thought that was pretty good too. 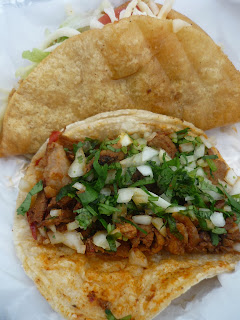 Up on High Street in Aurora is an area where you'll find a few family owned places serving specialties from back home. Las Cemitas Poblanas serves Cemita sandwiches which are native to the Puebla state of Mexico. I was first put onto this place by Grubseeker over at LTH. Seeing as I love a good cemita I had to have a try. 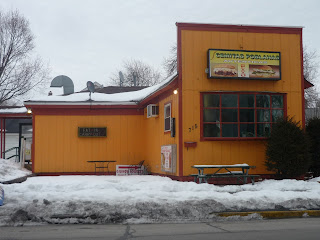 My visit was very much enjoyed, just like most others who have been. Great hospitality. You can find tortas just about anywhere but you wont find cemitas all over. The bread is different in many ways including the topping of it with sesame seeds and they always come topped with a dark red sweet and smokey sauce. We've got a place in Chicago (Stay tuned) but it's nice to see this style of sandwich available elsewhere. 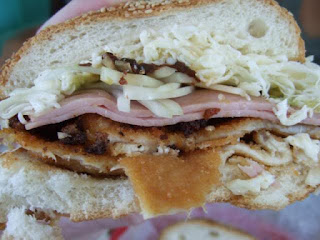 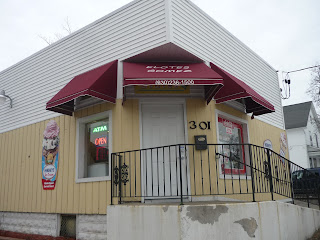 Also on high I was just driving by when I saw this store on the corner with the popular Mexican street food of elotes in its name. I stopped into try some as many other neighbors and churchgoers from across the street did the same. They had candy, drinks, nachos and some other grocery goods as well as ice cream. Elotes is the Mexican name for corn on the cob. It also refers to the street snack that takes it off the cob and mixes it in with diffeent condiments such as butter, chile powder, cheese and lime. The kids from around this way must love being able to walk over and get some of his. I've enjoyed my visits to the hugely popular Bien Trucha in the beautiful town of Geneva which is about 10 miles north of Aurora. Ever since it's appearance on Check! Please this place has had lines out the door before they open for dinner at 5p. They let the folks in line figure out who was first as they watch the crowds form from the windows inside, only to come out and start taking names at 5:00 on the dot. The place is pretty small and I imagine it was getting packed like this every warm weather weekend night before Alpana was putting it's name out there for all. Eater beware.

Some say the practices and policies here are similar to Cuba and China. I agree with those that say they come off as cocky, but so was Mike. The cocktails are very good and expertly prepared. On one visit after the CP episode, a lady and her hubby had rode over from Joliet and she put down five margaritas and we were done before they were so she may of had a couple more. I guess if its entertainment your looking for when you go out to eat, go to a place that gets alot of love on 'Check, Please' the weekend after the episode its on airs. Imagine this place with their rules, on a night like this.

Fresh chips and refried bean spread come on the house and their elotes are the best I've had from anywhere and that includes a recent trip to Aguascalientes. She loves the fresona cocktail and yes they're very refreshing and I'm not afraid to say it. I go for the pepino, also very refreshing and well executed. The only thing I've had that I wouldn't order again is the pica-pica which is bacon wrapped shrimp with onion, pineapple, and a chipotle-lime glaze. I expected these to be a few decent sized shrimp wrapped in bacon and then topped with a relish like mixture of that described but it was a kebab with big chunks of pineapple, small shrimp with little bacon around it and while not bad, not great.

I guess they feel taking ingredients off or substituting something for another thing will lessen their creations tastes which might weaken your experience which could then lead you to go Yelping about it. Some will think its worth the wait, others will think the wait plus small space and fact they are stern makes it a place not worth their while. This is the beauty of having choices of where one will eat. My take? The people of Geneva are lucky to have this as option.

I'm a sucker for good flautas and or taco dorados and so I've gotten these on all visits. Nothing too fancy as far as creation but these are done right. The best chicken flautas I've had from anywhere. I get cravings for these often. Then there's the pork belly tacos.

Described as slow roasted pork belly, adobo, salsa verde cruda, cucumber and queso fresco these were better than than the PB tacos offered at Big Star which I order from now and then. Again execution was perfect and the pieces of belly were cut up just right and each one came crispy and everything went real well together. 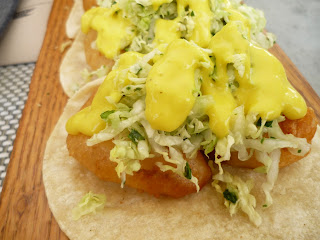 The Pescadilla tacos came heavily endorsed and they got even more love when Kevin Pang named them his "Favorite fish taco in Chicagoland". These are described on the menu as shredded shark and epazote with avocado-habanero pico. They come with hard shells and the shredded shark had a consistency similar to Italian canned tuna but a little different. I liked them and then when I tried for a second time I was totally sold. As I was saying I love a good expertly prepared hard shell taco.

The 'Bien Trucha' tacos come with grilled skirt steak, home-made chorizo, manchego and roasted tomatillo-serrano salsa. These I've got a few times. Hey I don't know if these are authentic or not as far as Mexico City street food, actually take that back. I do. This style is popular on the street stands around Mexico City and enjoyed in the wee hours of the night by its residents. Not that I've ever been but it would be hard to match these. I find them near perfect.

So despite the hype before 'Check, Please' and even now after as its in full blown hype mode. I'm still a fan. The food is good, it's priced fair for what it is and its a nice option in Geneva for lunch or dinner with drinks. It would get the same love and have same lines in Chicago. Geneva is a really pleasant, cute little town with a really charming atmosphere with some shopping and spa shenanigans for the ladies and bars with cold brews for the boys. So you can definitely make a day of it. The Metra will drop you off right there in town which Bien Trucha is a short walk from.

If you want your ex-girlfriend or ex-boyfriend to come crawling back to you on their knees (no matter why you broke up) you need to watch this video
right away...