I've been thru the somewhat newly opened Rickshaw Republic in Lincoln Park here a couple times since they opened and am happy to have them around. I'll echo what others in the food writing world have said about the ambiance inside and attitude of the family that runs the place. Both are great. Considering this is Chicago's only Indonesian restaurant they're giving the Southeast Asian cuisine a good name. One of the family members who works the front was very enthusiastic in explaining the dishes, you could feel his passion. Specialty of the house is anything with moms fish cake in it so I went with that wrapped around a boiled egg on one visit.

This dish was different. It was a little bit rubbery as far as texture goes but I guess that's supposed to be so. Even though it was my least favorite of what we tried, I ate all of it. The noodles with it were served cold which is how they're supposed to come. The idiot reviewing the place on Yelp should have asked. I tried some of the Rickshaw Noodles (served hot) with pork belly and liked those and the beef rendang is a very good example of the popular Southeast Asian dish loved by many. 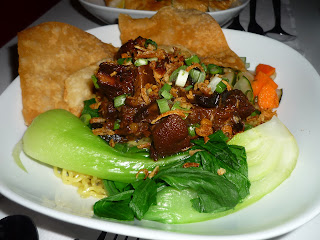 But the Indonesian fried rice is my favorite thus far. I've returned for it via pick up but must say the price of it with a side of killer homemade sambal sauce at close to $14 isn't a steal of a deal. I look forward to further exploring the menu as well as "Mom's Specials" which change weekly depending on what she feels like cooking. Yes the mother is actually in back cooking it up. I thought the price was pretty fair all in all but it's best to go with a few others so you can try different items. I'll be back.