You didn't think 4/20 was gonna go by without another special did you? This year we stick to the fried foods but celebrate it with chicken. So I hope you're not drained out on it just yet. Wait until this is over please because we're about head out to 10 spots I've had it at and can recommend to those looking for some in Chicagoland and beyond. If the munchies haven't hit you in the head yet, they're about too.
______________________

An Ode to Cherry Supper Club

I'm starting today's tour down in the Lasalle County, Illinois area because that's where any discussion of fried chicken in the state should start. People know about Nashville, they know about the rest of the parts down south and they should know about Southeast Indiana as far as great places to eat fried chicken goes but not many know about this part of Illinois. It can hang. 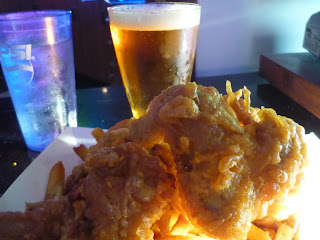 Rip's Chicken is the most well known spot to eat fried bird at down here and I can verify that as it's one of the most read posts ever on this site. People google "Rip's Chicken" from all over and they're slogan "We're worth the drive" is so very true. But the thing is, just about every spot down this way serves fried chicken and most places make a better version than anything you'll find in the city. Grubseeker has doc'd many of these spots and his theory is that when the people of Kentucky came to the area for mining jobs they brought their fried chicken recipes with them. Some call it Martucky down there mixing Marseilles, IL with Kentucky.

The Cherry Supper Club was just down the road from Rip's located in Cherry, Illinois and very similar in style. Cherry was the site of the 1909 Cherry Mine Disaster in which 259 boys and men died. Unfortunately as of last word the Supper Club no longer exists which might also make for no more businesses in town. But I share it here today to let all fried chicken fiends in Chicago know that you need to roll down state a couple hours to find some of the countries best. Just a pick a place, odds are their fried chicken is legit. If they have "ravs" get some of those too. Full report of the area and it's offerings coming soon. Stay tuned. 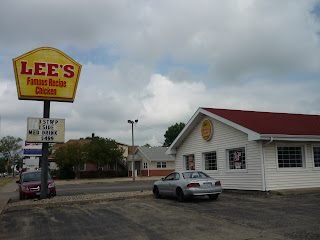 You ever seen one of these on the roads?

Well as long as we're down state we mgiht as well hit a Lee's. This one was in Matoon. The first Lee's opened in Lima, OH in 1966 "by Lee Cummings, the nephew and business partner of Harland Sanders, and is now a chain of over a hundred stores." from Rene G on LTHforum. I really enjoyed my sides at this regional fast food stop. The chicken and noodles were much better than they needed to be and the fried bird was pretty good too. Somewhat similar to the Colonel. I guess you can see why. 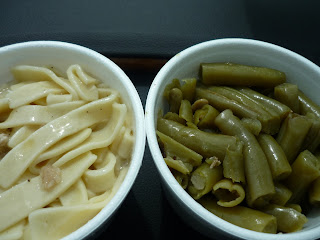 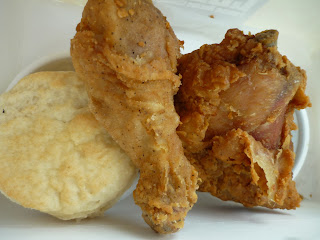 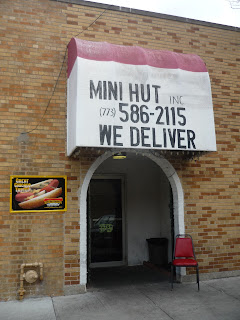 Popular locals stop on the Southwest Side

The Mini Hut is my favorite fried chicken available daily in Chicago. This butter crust fried chicken shack is about as no frills as you can get but who cares, those types of places are usually where you'll find the best. The entry is located just off Archer and it's best to call ahead because they're frying to order here and you're going to start wanting some as soon as the whiff hits you which it will do as soon as you step out the car. Take it to eat at Tom's Tap down the block and have a beer and watch some baseball while you indulge. 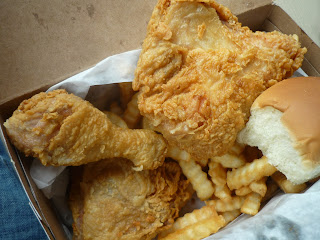 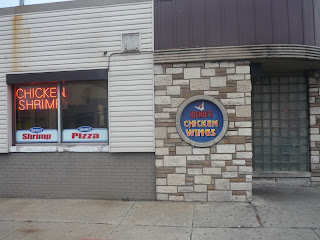 Hienie's is one of Chicago's original "Diner's, Drive-In's and Dives". They've had a cult following for some time now and we're featured on the cover of the original "The Streets and San Man's Guide to Chicago Eats". Located at 103rd and Torrence they double as both a fried shrimp and fried chicken shack where you must get the sauce. It's so well known and loved that it has it's own facebook fan page. 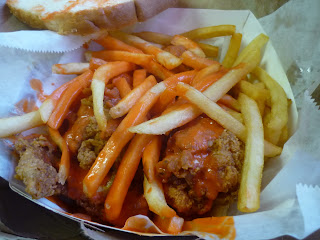 Fried Chicken and Fries from Hienie's

The sauce is what makes people crave this place. Don't get me wrong, they do an excellent frying job but people fiend for that neon orange sauce you see in the picture which hasn't been adjusted. I'd describe it as a buffalo sauce with mustard and vinegar that will tingle your taste buds. Although this sauce is found at many places on the Southeast Side, it's "Hienie's hot sauce" that it goes by. I'm not sure why we dont see more of them like we do Harold's but there is a 2nd location in Orland Park. More on that sauce HERE. 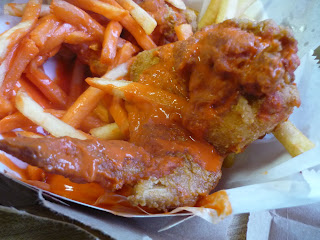 So in case you havent "scene" it already, fried chicken is the next big food trend in Chicago. There's a handful of places that have already opened which specialize in it and then there's a bunch of bars that have it on their menu as a special on certain nights. Frontier on Milwaukee is one of those places that feature it as a weekly special. Theirs is served on Mon. and it's freakin' fantastic. This batch has some heat which I enjoyed. It was also as juicy of an order as I've ate of late and had some of the best crust I've ate on any chicken. The special will set you back $12 and comes with half a bird as well as a slaw salad and a cheddar & house smoked ham hock biscuit and honey for drizzling. So good.

About a mile away from Frontier is the Southern and they do their fried chicken special on Wednesday's which makes it the best night to visit. If you're going to call your spot "The Southern" then you better do fried chicken right. That's the case here where it's fried to near perfection and comes atop some wonderful tasso ham gravy and is served with a biscuit. If you like Nashville style fried chicken which is HOT then try stopping in on Thursday when that's on special for country night. 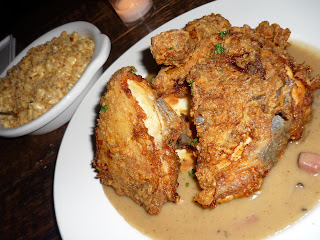 Chicago is rich with good Thai food and Spoon Thai is one of the longtime favorites of many. We'll get too each and every one as the days go by and as we do you'll see that each place has certain dishes that stand out above others. I'm no expert in eating Thai food but with today's wealth of information available online as well as the fact many places list their unique specials of the house as so on menus you dont need to have lived in Thailand for a few years to know whats up. What stands out at Spoon? Definitely gotta try their Thai Fried Chicken. They chop each piece up into smaller pieces and give them trip to the fryer with Thai spices seasoned into the mix and it comes served with a homemade tamarind chile sauce. Very addictive. 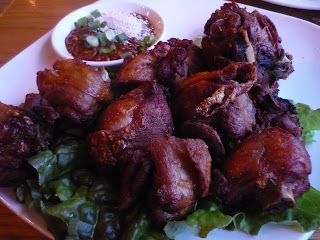 We haven't had fried chicken for breakfast yet so how about we try some for brunch? Acre Restaurant in Andersonville has a very respectable Chicken and Waffles made with fresh Amish chicken. It also comes served with some sausage on the side. Definite bonus points for that. 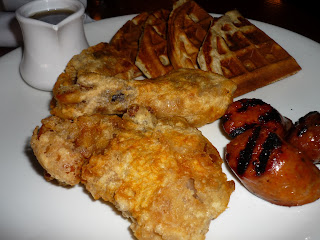 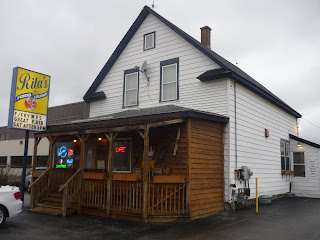 I'm not often in Lake Bluff but I do go thru there sometimes although it's usually in town where they have a nice local micro brewery and also Inovasi which is a place that I like near the lake. So I had no idea about Rita's down on Rockland Road towards 94 and Lambs Farm. But when I was tipped off that this old school roadhouse style tavern had some of the best fried chicken around I was more than down for the ride. It turns out they also do a fantastic fish fry featuring lake perch and the honey crusted chicken was indeed some of the best. Extra crispy and flavorful on the outside and juicy meat inside. For a heavyweight 1-2 punch have some cocktails in the tasting room at North Shore Distillery before or after. 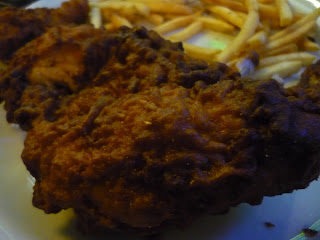 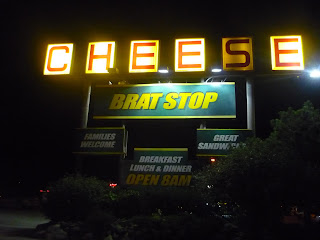 The legend that is in Kenosha

It's been a while since we've been to the Brat Stop huh? Well lets head a little further north and end our fried chicken fling in Kenosha. As is the case with many places in Wisconsin they broast their chicken here which results in a faster cooked less greasy batch. The company that makes these cookers is based out of Beloit so you tend to find this style throughout the state. When it's on special the fried chicken at Brat Stop isn't a bad selection if you're not feeling like a brat. I've come to learn they do most Wisconsin favorites right at this mega bar off I-94 just over the Illinois border in Kenosha. 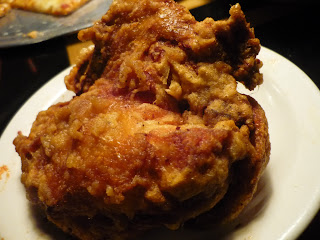