I have a couple new places to post about located on Belmont between Sheffield and Clark streets right off the Red Line. Korean Taco's burst onto the scene a few years back in Los Angeles. The fusion tacos became a popular on the food truck scene giving yet another example of the good that comes out of America and it's diverse backgrounds. In case your a food fan that's been living in a cave these are actually more Korean than anything ingredients wise, it just all goes into a tortilla so thus they're called Korean tacos. In Chicago we only have three spots that I know of serving Korean tacos with the newest of the three being La Tacorea. 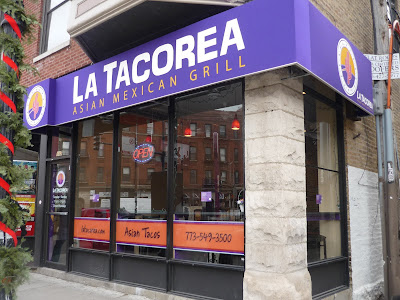 La Tacorea had the awning on their new place up for a while before they actually opened so I passed by a few times and it stayed fresh in my mind and since it's not far from Lincoln Park I got to stop in eventually a little while after they opened. It's a son teamed up with this mother and the menu is pretty simple. They offer the namesake tacos which come with the options of bulgogi (thinly sliced ribeye), short rib, chicken, shrimp and tofu. On my first visit the chicken looked promising and I went with that inside a burrito. 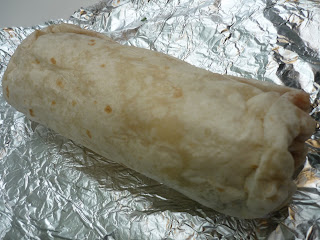 Korean BBQ Burrito
I'm not a big burrito boy but must say I enjoyed this one for what it was. The chicken wasn't dry which is the main reason I usually don't get chicken as my filling. It was well marinated and chopped up nicely into perfect size chunks. Along with the chicken they threw rice inside the tortilla as well as a bunch of other options of your choice including the Korean loved kim chi. The real stunner though when it comes to these are the homemade sauce they offer with them. Its a Asian/Mexican fusion like the rest of menu and really hits the spot. Get extra on the side. 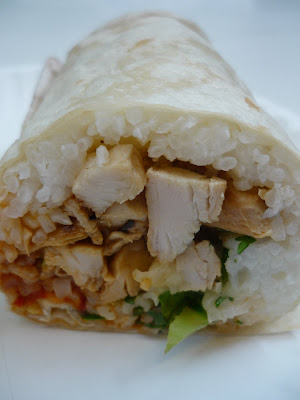 Then there's those tacos. Here they offer "jumbo tacos". Unless your a big chow king odds are one might be enough for you. They use flour tortillas as opposed to the other Korean taco spots I've been to which use corn. I think the flour are good for here because they fill the tortillas up, stuffing an entire meal inside and they hold up well. The owner told me his moms bulgogi is where its at, so I tried a sliced ribeye taco and came away impressed. This was the best bulgogi I've had used as a taco filling yet. The best part being how juicy it was, which was created by it sitting in a bunch of its own juices. So in the end yes Mexican-Asian fusion is and or was trendy but also can be very tasty. I just wish they'd infuse more Mexican into them aside from the tortillas. 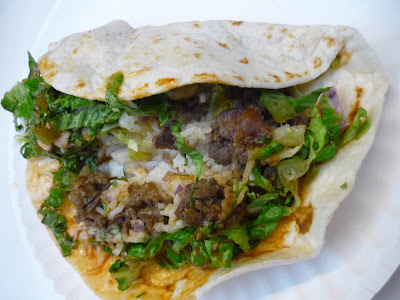