Regional Fast Food
-Classic Delaware Sandwiches made famous in Vegas
I first read about Capriotti's on LTHforum, the Chicago based food forum. Someone, either from the East Coast or Las Vegas, wanted to know if there was anyplace in Chicago with sandwiches similar to theirs. Which the poster said he craves daily. Not too many people knew of Capriotti's since they have no Chicago or even Illinois locations. The closest one's to us are all in Wisconsin. They have two locations in Madison, neither of which were around when I was living there and one in downtown Milwaukee. I was intrigued by what I had read about them after learning of the place so I always had it on my list. I checked it off while in Milwaukee not too long ago. 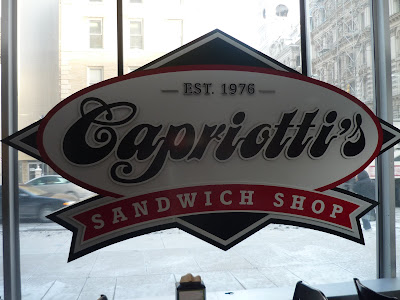 Birthplace: Wilmington, DE
Type: Franchised
Founded in: 1976
How Many Today: Over 60
Locations in: 11 states incl. WI and FL
Menu item that made them: Sub Sandwich

Today Capriotti's is well known by those people who are lucky enough to be near one. It all started off in Wilmington, DE which if you were unaware is a sandwich paradise. I've never been to Delaware but when I do get there, I'll be eating a bunch of signature sandwiches from all over. Capriotti's was started by a young lady who wanted to open her own sandwich shop in Wilmington's Little Italy so she borrowed the money to do so and teamed up with her brother and they named the shop after their grandpa. A recent trip to Philly aka Sandwich City, USA confirmed my love for the cheesesteak so I gave Capriotti's version a try. Not bad at all, especially for a franchised place, in fact it was really good. It was cooked to order, chopped up and topped with fried onions, their famous hot peppers and sweet peppers too. Should of got two. 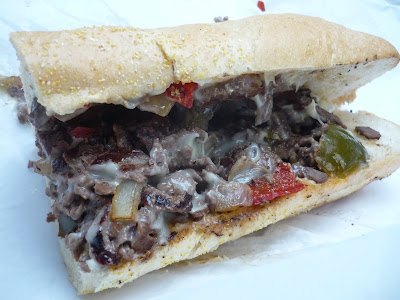 It was in1987 that the Capriotti's teamed up with their cousin and opened up a 2nd and 3rd store. They started to introduce their signature sandwiches around this time including "the Bobbie" which is it's most famous today. The Bobbie was the sandwich the person looking for something similar in Chicago wanted. Their approach when they first started was to capture the heart of "real turkey lovers" and they would roast fresh turkeys overnight. This was something that separated them from the other seven sandwich shops in the neighborhood. They began roasting one a night but then were up to twelve per. The sandwiches were made to order with the turkey meat. The most popular today is the 'Bobbie' which comes with that fresh roasted pulled turkey meat, stuffing, cranberry sauce and mayo. 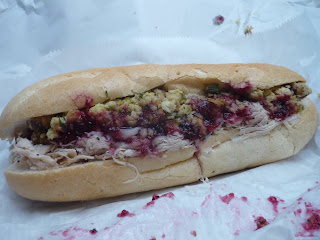 Capriotti's famous "Bobbie" sandwich
Again this was another very good example of a "fast food franchise" sandwich. The bread was the best I can remember from a franchised place and I thought the 'Bobbie' was a satisfyingly simple sandwich thanks to the fresh turkey paired with their bread. I'd say I slightly enjoyed the cheesesteak better but so do many as that's their most famous hot sub sold. Well the companies dedication to quality sandwiches with above average ingredients got them to 44 stores before they started franchising which they do today. Now located in Las Vegas (Where most of their locations are) the original founders sold the company to an original franchisee and they seem to be doing a great job with with plans to have over 500 locations by 2015. I'm a fan. 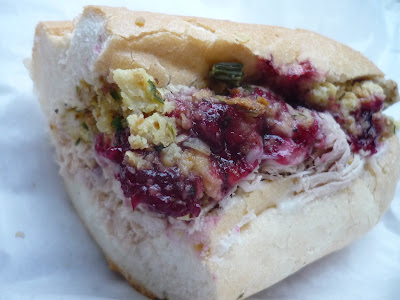 The "Bobbie" is something Subway franchise owners enjoy...

*Please note there are multiple locations throughout the country. Click HERE.
Posted by KingT at 2:22 AM