I normally stay away from the newly opened hot spots at least a couple months before I decide to try them, if I ever do. Butcher & the Burger would be one of these types of hot spots (for now anyway). As far as trendy goes B&tB has everything going for it. They got the name which nowadays has to include two names with an & in between, they do burgers which are HOT and are also a butcher shop in fancy Lincoln Park. Everyone in line was on FB and Twitter (incl. Me) while using their iPhone. I'll save their story and the names behind the place for all the press that's coming and share my experience. I tried it recently because I was hungry, driving by and happened to pull upon a parking spot. on Armitage in Lincoln Park just west of Sheffield

I walked in around peak lunch hours and there was a line (you order and then sit down) and a few if any seats. It's a pretty small spot including the kitchen, I thought the grill space was and could be a problem. Then again it had just opened 10 days ago and it was a beautiful Friday afternoon. So they were packed and the order took 20 minutes but I cant complain about that. They encourage you to call ahead but with this being my first visit, added to the fact you build your own burger I didn't want to call in. I understand mistakes in orders happen when a newly opened place gets flooded and one seemed like it could doing a call in. 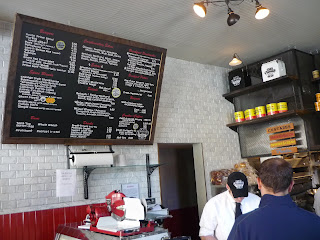 Waiting in Line
They also have a guy walking around with an iPad like device that takes orders and payment to those in line so they were trying to move it despite the limited space which is nice. After I ordered I went off to the back where you can get a peak inside the meat locker. The team making the food seemed to be in-sync as one lady hand patted and seasoned each patty before handing it off to the grillmaster who grilled it and then dressed them before handing the plate to the extra help guys who would top them with fries. The flames were rising high with the grill being packed with patties. I liked what I was seeing which was because of the fact there wasn't anywhere for me to stand except over the action. I was tempted to try their custard when I saw the top flavor for the day. 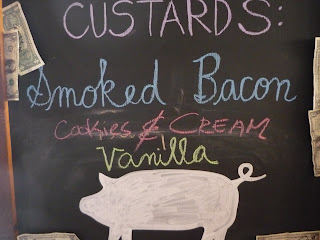 Custard Menu (Flavors change)
I took my order to go since I'm only a five minute drive back. You start off with your preferred burger, I did the ground in house beef blend ($8.50) but there are other options and not all beef. Then you choose a blended spice mix to add in which also has many options ranging from Simple (sea salt and cracked pepper) to Burger Meets Sun (ghost pepper). I went with Chicago Steakhouse blend which you cant ever go wrong with. 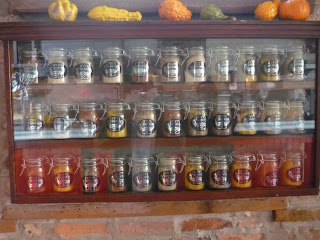 Spice Rack
Next is your bun which I chose to be the traditional split and buttered egg bun, pretzel rolls are available for .50 cents extra. Only after all that do you tell them your topping options. The "on of the house (no charge)" toppings include your cheese preference and all the usual suspects while theres also options that are extra like a fried egg ($1) or Benton’s Tennessee Mountain Smoked Bacon ($2). I went with my traditional toppings of grilled onions, mustard, pickles, I chose cheddar cheese and had to try the bacon. I also got the fries which I've heard good things about so I wanted to try them too. 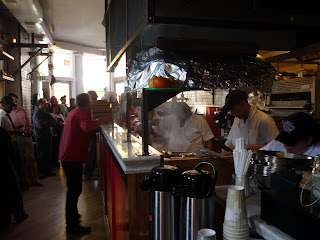 Waiting at the back
The result? Not bad! If your willing to look past the price ($13 and change) and you like a good burger then this could be a good spot. They cook them to your preferred temp inside mine came out medium rare. The bacon as seen below was thick and fantastic, which the same can be said for the fries. I cant recall which type of fancy potatoes they said they use but they taste great and my order was cooked to a perfect crispy consistency with the perfect amount of salt sprinkled on. My only complaint and this is personal taste is that they use the bread and butter pickles which are too sweet for me. I like deli sliced better. Even if it wasn't as good as it was I'd of given them another shot if only because they're close to me and it was crowded to the point where I could see the new workers, not yet in the groove, getting overwhelmed but they didn't so extra props for that. I'll be back. 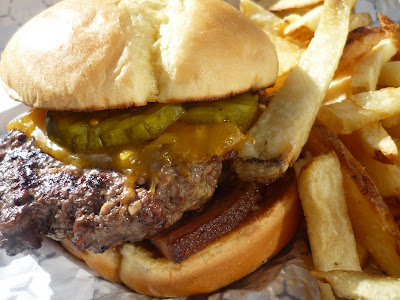 A burger built my way

I stopped back in this past weekend to try a breakfast sandwich which had me tempted on my first visit. They make their breakfast sausage in house and on my most recent visit the meat locker had some nice looking things inside of it. On top of some nice coffee and beignets which are offered all day you can also get a burger with no bun for breakfast as well as a sandwich with your choice of pork along with eggs, cheese and onions served on a croissant roll. This time I tried the house sausage and that too, like the bacon, is really tasty. It's got a little more of a sweet kick to it than spicy but worked well with the fresh croissant. I look forward to buying some items out the meat locker on my next visit back. Nice to have them in the neighborhood. 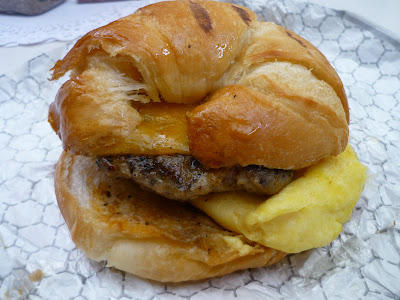