Chicago is well known for our Pizza, Hot Dogs, Italian Beefs and a few other treats native to the city. No tacos arent indigenous to Chicago but they can be found on pretty much each and every block in all sorts of styles. Chicago is one of the best places in the world (outside of Mexico) to eat Mexican cuisine. It would be impossible to make a special trip to each and every taqueria in town but I try as many as I can, especially ones that for one reason or another stand out. So here are five more tacos spots from Chicagoland to which I have been.
________________________________________ 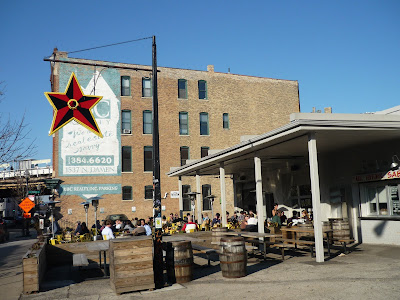 Despite the fact you have never seen a post on Big Star here on the site, that doesn't mean I don't like. First off I'm still waiting on time to get up some of my favorite food spots in Chi, so just because they haven't been featured doesn't mean I don't get there. While I'm the first to admit I'm not Bucktown's biggest fan, I'll also be the first to admit Big Star does it right. The popular stop for whiskey and tacos has been a hit with residents since they first opened two years ago. The menu is small and that allows them to do it well. On top of tacos they offer Sonoran Hot Dogs, a chicken tostada, salad and chips and guac too. The tacos are my go-to but the tostada is great too. Consistency has varied over time but it's usually better than good. 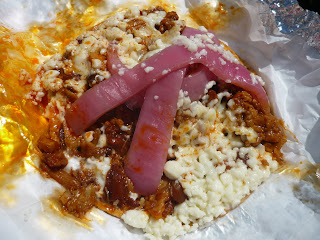 Big Star Chicken Tostada
The taco menu at Big Star has a little bit of it all with the exception of a beef/steak stuffed one. I think the fish taco is just ok and I'm not a Veg-Head so I never get the offerings with no meat. For me I tend to get the same two each and every time. While the al pastor is not cut from a spit the authentic and much preferred way, it's still very good. In fact it's the best pastor I have had that wasn't freshly cut. Perfectly crisped and well seasoned I enjoy the pineapple on top and eat these monthly. Then theres the tacos de panza, pork belly tacos, how can these not be good? They're great when they're on when super crispy and one of my favorite tacos in the city. 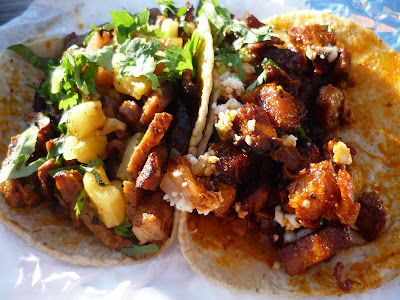 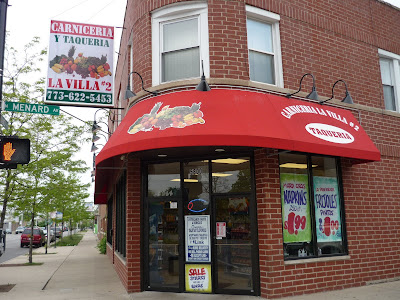 On Grand ave in the Belmont Cragin neighborhood

Of the 1000's of taquerias in Chicagoland, many of them double as butcher shops/grocers. It's hard to go a block in the heavier Mexican populated parts of town without passing one of these neighborhood groceries. It makes sense when everything they need to make a meal is stocked in store and many Mexicans and folks from all races for that matter who are from the working class enjoy a few tacos for lunch. I tried the skirt steak tacos from La Villa #2 this past summer and got a real nice bang for my buck. The steak wasn't char grilled fresh but it did have a nice char taste and some juiciness left. At under $5 for two these were something I'd eat often if I lived near there. 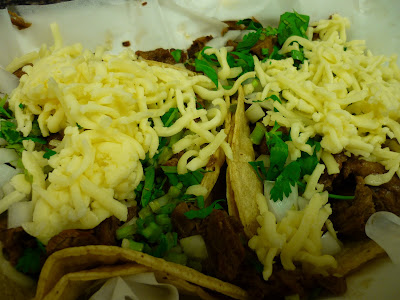 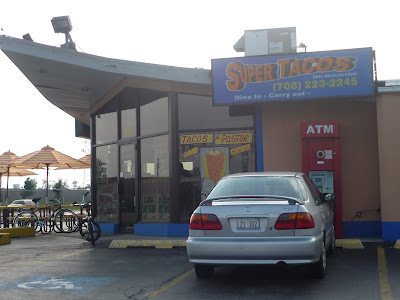 At Manheim Road and Lake Street in Stone Park, IL

I passed by Super Tacos and noticed it for the cool looking old school building it sits in. Then I saw the 'tacos al pastor' sign seen on the window in the pic above and I pulled in to try them. You can see the fresh spit of meat they advertise and it was a pleasant surprise to also see the spit in motion as I entered. 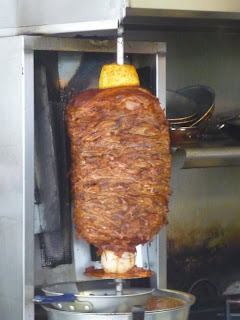 Spit Roasted Pork Meat
Unfortunately that's about where the good signs stopped. Despite the roast being in place the men behind the counter never shaved the meat for my taco off of it. The place wasn't busy and it really should of been done the real way because then it might of been a good taco. Instead it was most likely cut off hours or maybe a day or two before my arrival and then reheated on the flattop and served dry with little goodness. The best places for al pastor are the ones that do it right which takes time, there are no shortcuts with it. 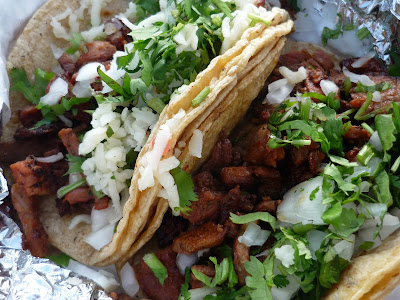 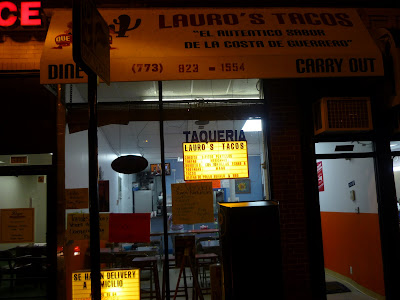 On 26th Street in the Little Village neighborhood

When you take a drive down 26th street (South Lawndale) you can be taken to Mexico after just a couple blocks of riding. The Little Village or La Villita neighborhood is actually one of the cities largest communities with 1,000's of business that make their home there. Nowadays its predominantly Mexican and is also known as "Mexico of the Midwest". I couldn't tell you how many taquerias there are in La Villita but I can promise theres almost too many to try solo. I was attracted into Lauro's when I saw they do handmade tortillas. 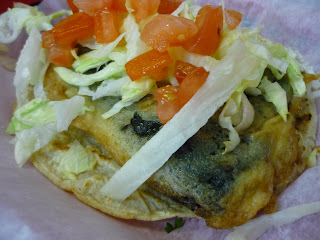 Chili Rellano Taco
It is somewhat surprising that considering how many Mexican restaurants Chicago has that only so few do tortillas in house. But the (legit) reason for this is Chicago also has something like 6 or 7 tortilla factories all of which play a huge role in the local economy. Most taquerias and carnicerias get them delivered daily and their still warm when they use or sell them. But I still like a thicker handmade tortilla and Lauro's had those. They were very good and I liked the chili rellano taco very much. However the other fillings (steak and Tripa) were just ok. This is the biggest problem with the countless places the city has to offer, many of them are just average. But this is no different than anywhere else. The reason the alright places are just average is because there's so many places for great ones. What I'm trying to say is the average taco joint in Chicago would be one of the better ones in many other spots. 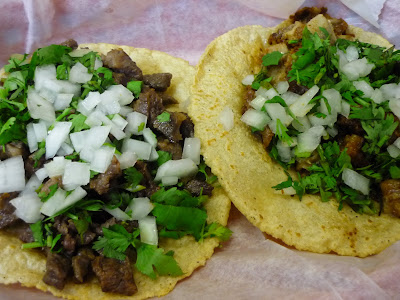 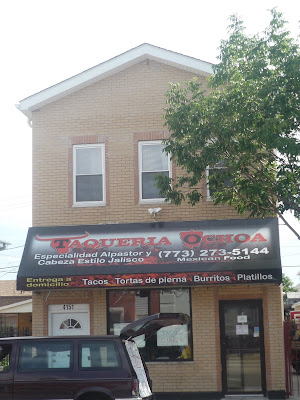 On 47th Street in Back of the Yards

Another one of the cities more ethnic and interesting streets to chow is 47th street. Stretching from Hyde Park all the way west you'll come across all sorts of different cuisine from all sorts of varying backgrounds. There's a couple stretches along 47th that are full of Mexican flare and I tried Taqueria Ochoa along one of them last spring. What got me in was their specialty of al pastor but I was saddened when I went in and there was no spit. I still opted to try one and instead also got one of their other forte's a taco de cabeza or 'head taco' too. The al pastor was ok. It wasn't a Sat. or Sun. so I would hope maybe they do a real spit on weekends and this meat was leftover and previously shaved off. 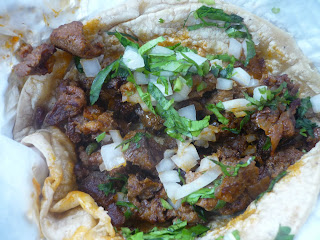 Taco al Pastor
The cabeza was actually pretty good, once you get past the fact it's the cows head your eating. It's steamed and rich in flavor making it perfect for a taco. Throw it in a tortilla and add on some onions and cilantro and a squirt of salsa and you got a meal. What really intrigued me though was the fact they serve carne en su jugo (on WKDS only) and traditionally the broth for this Jaliscan soup is made with the head of the cow and the meat is shredded and used in the soup. Now that cold weather is back it's my plan to get back and try that. Do stay tuned. 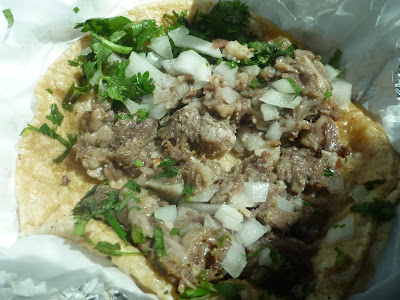