With the fried shrimp season in full swing I figured now was Frank's time. With all the pub and press given to pizza and hot dogs sometimes other famous city eats get forgotten about. Chicago is actually a big fried shrimp town and alot of the spots with it go back to the 50's. We have 100's of different shrimp shacks throughout the city and its surrounding area. In fact we even have "Chicago style" shrimp which is fried and usually has a heavy batter that contains herbs and spices in it. Served with a sauce containing both cocktail sauce and hot sauce these dinners usually will come served with fries and slaw. Many people in the city have their favorite spot for it and Frank's Chicago Shrimp House is one of the more popular choices. 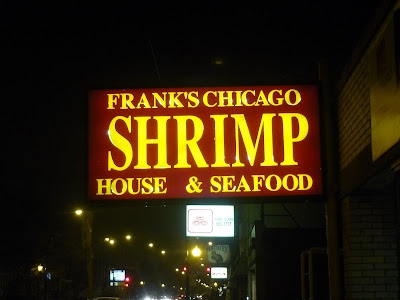 This location sits on Addison

I've long been a fried shrimp guy, it was one of my favorites as a youth. Then when I got my license I remember going on fried shrimp and Italian beef excursions seeking out the best of the best in the city, which I'm still doing today. Over time I have passed quite a few Frank's locations and a little research tells me there are currently four still standing. I like to go to the location on Addison when in the area and in the need for grease. Steve 'the hungry hound' Dolinsky recently did a fried shrimp report and came away naming Frank's best in city. I might have to agree with that. 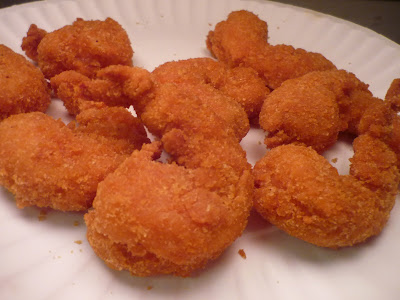 One of the more important things for fried shrimp with me is fresh breaded which Frank's does. They have a bunch of fresh shrimp in a bus tray full of breading and they pull them out and shake off the excess breading to order which is important. I don't really love the frozen pre-breaded straight from the freezer stuff some places serve. Everything else at Frank's is frozen so the shrimp are the way to go. At Frank's they have a way with shrimp and it starts with getting nice sized pieces of it. They claim to use Gulf shrimp and I don't dispute that since the pieces of shrimp here are always well sized meaty pieces. The other part of Frank's shrimp that stands out is the breading itself. It's a thicker Chicago style but not too think and that's the way I like it. The shrimp have a perfect crunch to them when you bite into one and when you add a little hot sauce they become magnificent. Frank's is a place I would recommend to anyone in the mood for some "Chicago Style" fried shrimp so go check it out. See ya next time on S'C'&C. 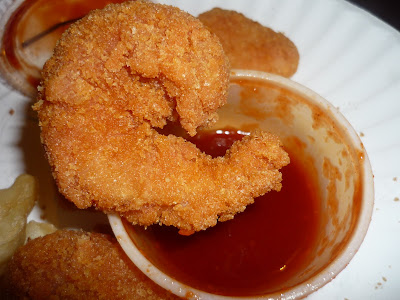 a piece of Chicago style shrimp from Frank's